Lord Raedric is a monster in human skin, and I've decided it's time to oust him from his wardrobe. Unfortunately, in this case the wardrobe is a massive castle with walls thicker than a lead sundae, manned by a small army of guards. By comparison, my party currently has only five members, one of whom is suffering from the world's worst case split-personality disorder, while another is better at singing than he is fighting. A frontal assault would be suicidal. Fortunately, I've been informed that there is a secret entrance to the castle hidden somewhere around the moat. Sneaking inside, I stumble across the lair of Raedric's animancer, which is sort of like a necromancer, but isn't. Imagine Dr Frankenstein worked with magic instead of lightning, and you're about halfway there. Anyway, I confront the animancer, and somehow convince her that I'm supposed to be down here with a motley crue of adventurers, killing all her minions and nicking anything that isn't nailed down. Then I kill her anyway because I'm a Paladin and we don't like people messing
around with the dead.

Ascending to the castle proper, I find a storage room and disguise my party as priests of Berath, using the sheer force of my resolve to browbeat my way through the keep. Apparently being a good priest simply involves acting like an obnoxious and entitled berk. Who knew? In the end, I manage to walk right up to Raedric before his guards realise I'm not here for cake and a party, and by that point it's too late. Raedric tries to fob me off, but
I've witnessed his crimes first-hand. Afterwards, I walk freely through the castle gate into the morning sun, certain I've done God's work. I carry this thought through the rest of the game, only to realise right at the death that I might have been wrong, and in more ways than one. Pillars of Eternity is a stunning RPG. It harks back to the classic isometric games like Baldur's Gate and Icewind Dale, while being infused with just the right amount of modern considerations to make it feel like more than a nostalgia trip. But the heart of its success has nothing to do with either old or new RPG design. Instead, it's simply down to damn good RPG design. Pillars brings together a fascinating world with abundant ways to explore it, intelligent, heartfelt and often witty writing, an excellent central cast of characters, and engaging tactical combat. Let's begin with the concept. As I already stated, Pillars pitches itself as a throwback to the best RPGs of the nineties. It's isometric perspective, its sumptuous hand-painted art-style, its lore-book you could kill a man with, it's all very much in the vein of BioWare's early years. Now I should probably point out that none of this is what makes Pillars interesting to me. I'm not a massive fan of isometric games, and I've never pushed more than a few hours into Baldur's Gate. Yet for me Pillars works where Baldur's Gate didn't, and that's because it's much more than a pastiche of BioWare's games. 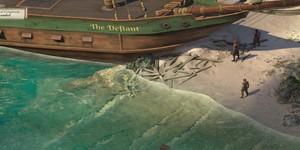 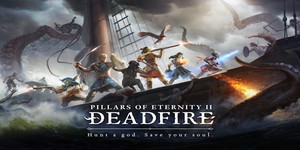