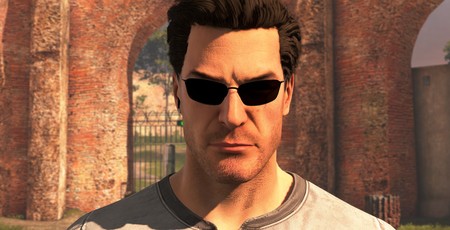 Serious Sam 4 is more of the same, with the emphasis firmly on the word “more”. More enemies, more guns, more locations, more features, more bad jokes, more good jokes, and definitely more gore. In many ways it’s the sequel Serious Sam 3 should have been, although I mean that in both positive and negative ways. On the upside, it feels like a proper new game rather than a fancier re-tread of the original. On the downside, it often looks and feels like it should have come out nine years ago. SS4 is technically another prequel to the first game, not that this matters in terms of your personal experience. Sam’s personal timeline is as circular as his battle tactics. He always exists in one temporal moment, namely stood in front of a horde of monsters while holding a massive gun. No matter where he is, what he’s doing, or why he’s there, that’s the Serious Sam experience, and SS4 doesn’t feel the need to change that much.

This time the cyclic carnage revolves around Sam hunting for the Holy Grail in order to destroy the alien menace plaguing Earth. It’s a wilfully silly premise that encapsulates the whole game’s attitude toward storytelling. The plot is entirely disposable, while the writing is chock-full of jokes delivered straight from the mouth of your dad. A running joke is that Sam’s squad of equally ridiculous action stereotypes embark on a one-liner competition that lasts the duration of the game. The humour will make you laugh and roll your eyes in equal measure, but while it’s somewhat old-fashioned, it’s never sleazy or mean-spirited in the way some ‘classic’ nineties’ shooters are. Beyond the jokes, the most significant effect the story has on the moment-to-moment play is in location. Sam mercifully escapes the arid deserts of ancient Egypt, embarking instead on the world’s most violent gap year across Europe. Across the game’s 15 levels, you’ll travel to Italy, France, and finally Russia. Alongside the larger number of locales, there’s also more variation in general level design too. Croteam’s propensity for designing extremely flat levels strewn with ruins still rears its head, but amongst those more familiar scenarios are meandering cityscapes, a huge level set in French countryside, and an impressive recreation of the medieval city of Carcassone. There’s even a level where you travel to Pompeii and deliberately cause Vesuvius to erupt, although the game sadly keeps you at arm’s length from the mountain when it eventually pops its top.

Combat starts off familiar, perhaps even underwhelming. The weapons feel almost the same as they did in Serious Sam 3, and it takes a good couple of levels for things to properly kick into gear. Once you start unlocking new abilities from the game’s (somewhat tacked-on) skills system, however, it starts to pick up. The most obvious change is that Sam can now dual-wield any weapon, from his starting pistols to hulking around a pair of miniguns. There’s no doubt that blowing away the game’s incessant enemy hordes with a pair of rocket-launchers is enjoyable, but arguably the more important change to the gunplay is that Sam can now shoot while sprinting. This makes him a much nimbler FPS protagonist, able to sprint right up to a Kleer Skeleton before blowing it into dust with a well-timed shotgun blast.

With Sam’s expanded skillset comes greater variance to weapons and enemies. Alongside the familiar Gnaar and Beheaded Kamikazes, you’ll also be fighting hordes of weird orange zombies that rush you while giggling disturbingly, and swarms of flying drones that appear to be made out of wet cardboard. While not exactly iconic, they do make for good cannon fodder. There are also lots of returning enemies from earlier serious Sam games, and Serious Sam VR, such as the Beheaded Bomber and the Beheaded Firecracker. As for weapons, there are a couple of news entries such as the fantastic autoshotgun, while many returning weapons now feature an alt-fire mode. The standard shotgun can be upgraded with a grenade-launcher attachment, while the rocket launcher can stack and then fire five rockets at once. On top of all this, you also get access to a range of special gadgets, which range from a simple health boost to ridiculous powerups like mini-nukes and deployable black holes. Alongside being extremely satisfying, these are great for dealing with a particularly troublesome section, like a limited-use cheat code baked into the game.

Serious Sam 4 is a very likeable game. When the combat is full-flow, it’s flippin’ spectacular. Seeing a massive horde of Beheaded Kamikaze roll over the crest of a hillside never fails to bring a smile to my face. SS4 is considerably smarter in setting up its individual combat scenarios than earlier games, too. Enemies will often spawn all around you rather than simply in front of you, which means you can’t rely solely on back-pedalling to survive. It also tries to catch you off guard in other ways, like sending a horde of enemies down a flight of stairs, or filling an urban area with eagle-eyed snipers that have to be picked off while avoiding other enemies charging at you. Fun as SS4 can be, however, the whole experience feels quite dated. Not retro, dated. Visually it doesn’t look that much better than Serious Sam 3. In particular, character models are ropier than a Spanish Galleon, which would be less of a problem if there weren’t quite so many cutscenes. Animations are a little on the stiff side, too. The melee kills look the pre-Alpha version of Doom Eternal, unpolished and underwhelming.

It isn’t just the visuals which feel somewhat behind the times either. All of the game's “new” ideas, from adding skill points to the optional “side missions” that frequently crop up during levels, smack of a game that’s scrambling for relevance. I do wonder whether the game was intended to be open world at some point, before the developers decided it was simply too ambitious or technically difficult, and scaled things back to a more familiar linear experience. Ultimately, Serious Sam 4 is the B-movie of first-person shooters. Caught between the old and the new, it isn’t willing to go full, stylised retro like the spellbinding DUSK, but it also lacks the budget to follow Doom Eternal down the mainstream road. But B-movies can still be a lot of fun, and Serious Sam 4 is no different. It may be a little clunky, a little wonky. But if all you care about is blasting apart huge numbers of enemies with satisfying guns, Sam has once again got you covered.