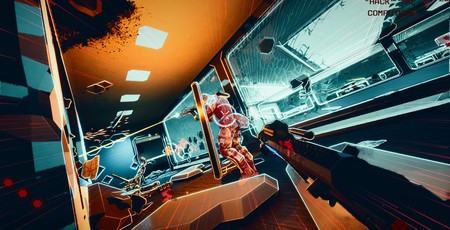 Severed Steel is the epitome of style-over-substance, to the point where I suspect this was the game's working title. Greylock Studio's debut is an undeniably swish cyberpunk FPS with neat destructible environments and an emphasis on pulling off cool stunts. But while I admired its spectacle, the experience ultimately left me feeling hollow and unsatisfied, like eating a bucket of popping candy. 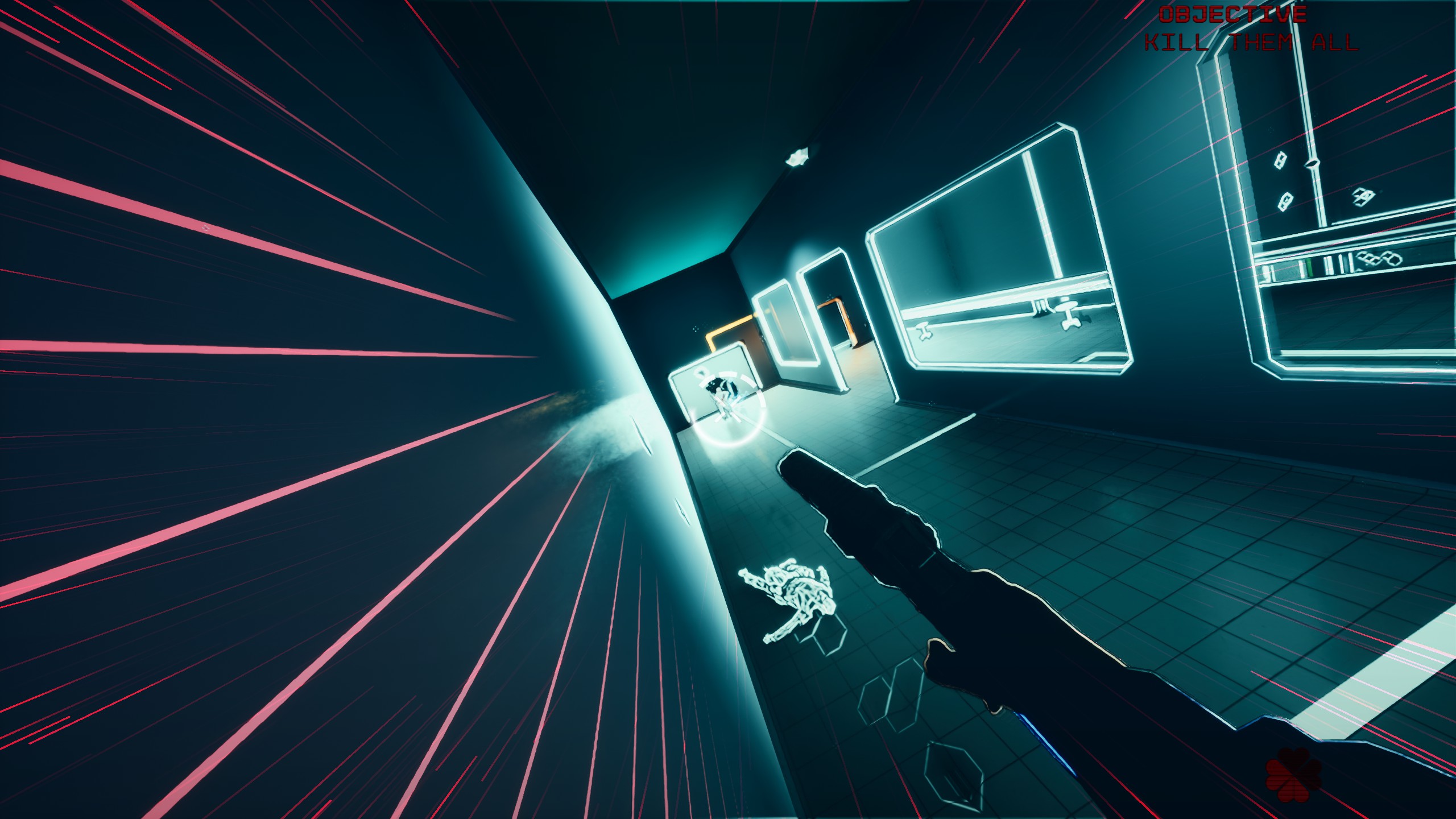 I'm not wholly sure what the story of Severed Steel is, but here's what I gleaned from its sprinkling of plot. You play a nameless woman who awakes deep in the bowels of a cyberpunk megastructure belonging to some militarised corporation, whereupon she discovers she is missing an arm. Understandably annoyed by this, she resolves to climb out from the megastructure's depths and ascend its many floors, gunning down whoever crosses her path in a vengeance-fuelled rampage.

As you can probably tell, Severed Steel doesn't care that much about storytelling. Instead, what it cares about is shooting people in cool ways. This isn't your usual run-and-gun affair, where circle-strafing is sufficient to bamboozle your foes. In fact, running around will see you dead quicker than a fruit-fly in a vinegar factory. Each of the game's neon-lit levels is stuffed full of heavily armed goons, and moving in a tediously two-dimensional fashion will result in death within seconds. 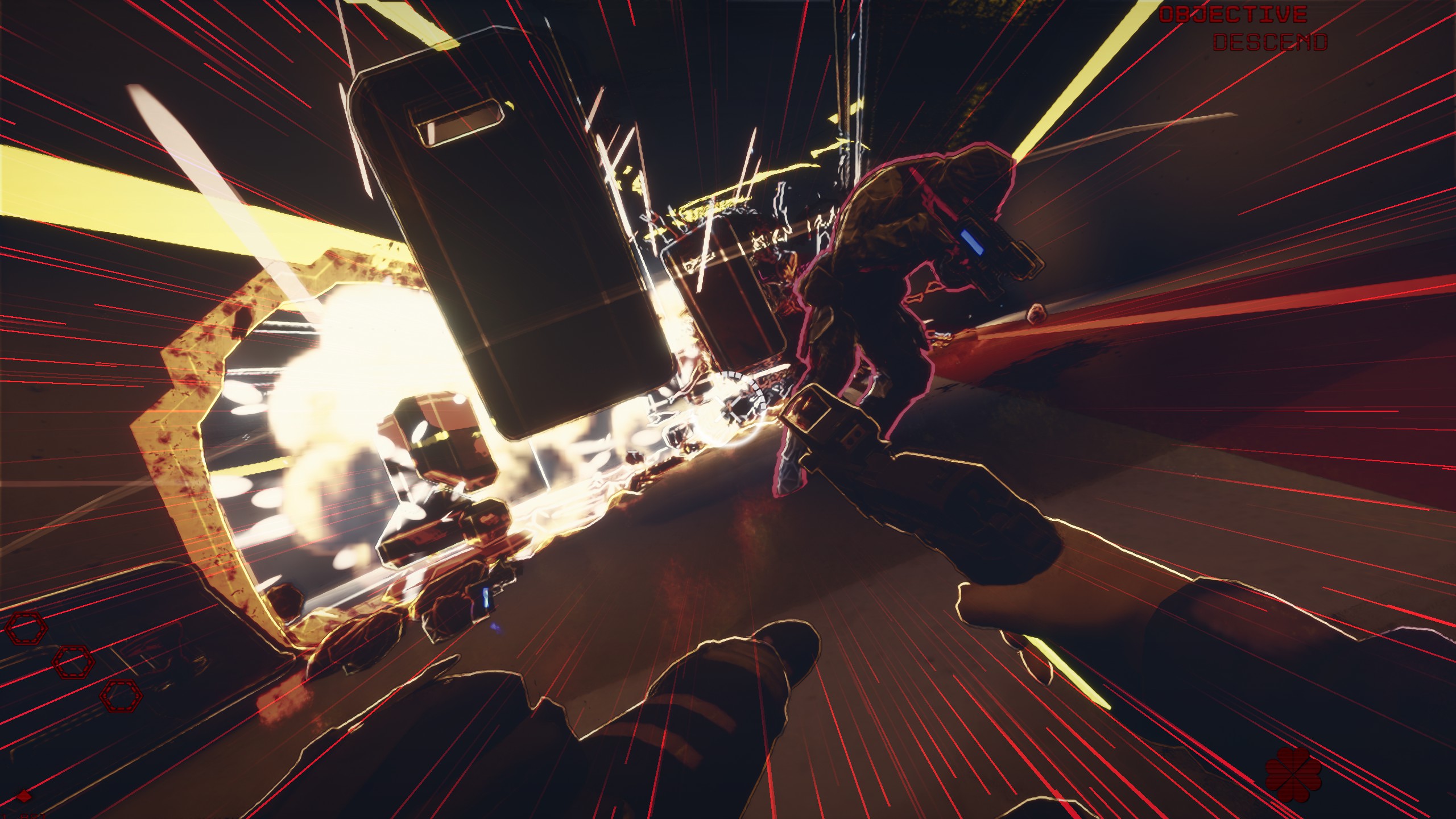 Fortunately, your protagonist is a one-armed parkour master. She can run along walls, perform Matrix-style dives and backflips, and slide along the ground as if her trousers are made of Teflon. Lady vengeance is essentially invincible while performing any of these moves, so it's very fortunate that they can be chained together into lengthy combos. You can push off a wall into a sideways dive, then move seamlessly into a ground-slide once you hit terra firma, then dive again before your slide runs out of momentum.

Severed Steel combines these survivalist acrobatics with a generous dollop of bullet-time, turning the whole game into a John Woo action-sequence simulator. Not only does bullet-time last 10-20 seconds by default, killing enemies refills your bullet-time meter, meaning you can effectively spend entire levels arcing through the air in slow-motion. 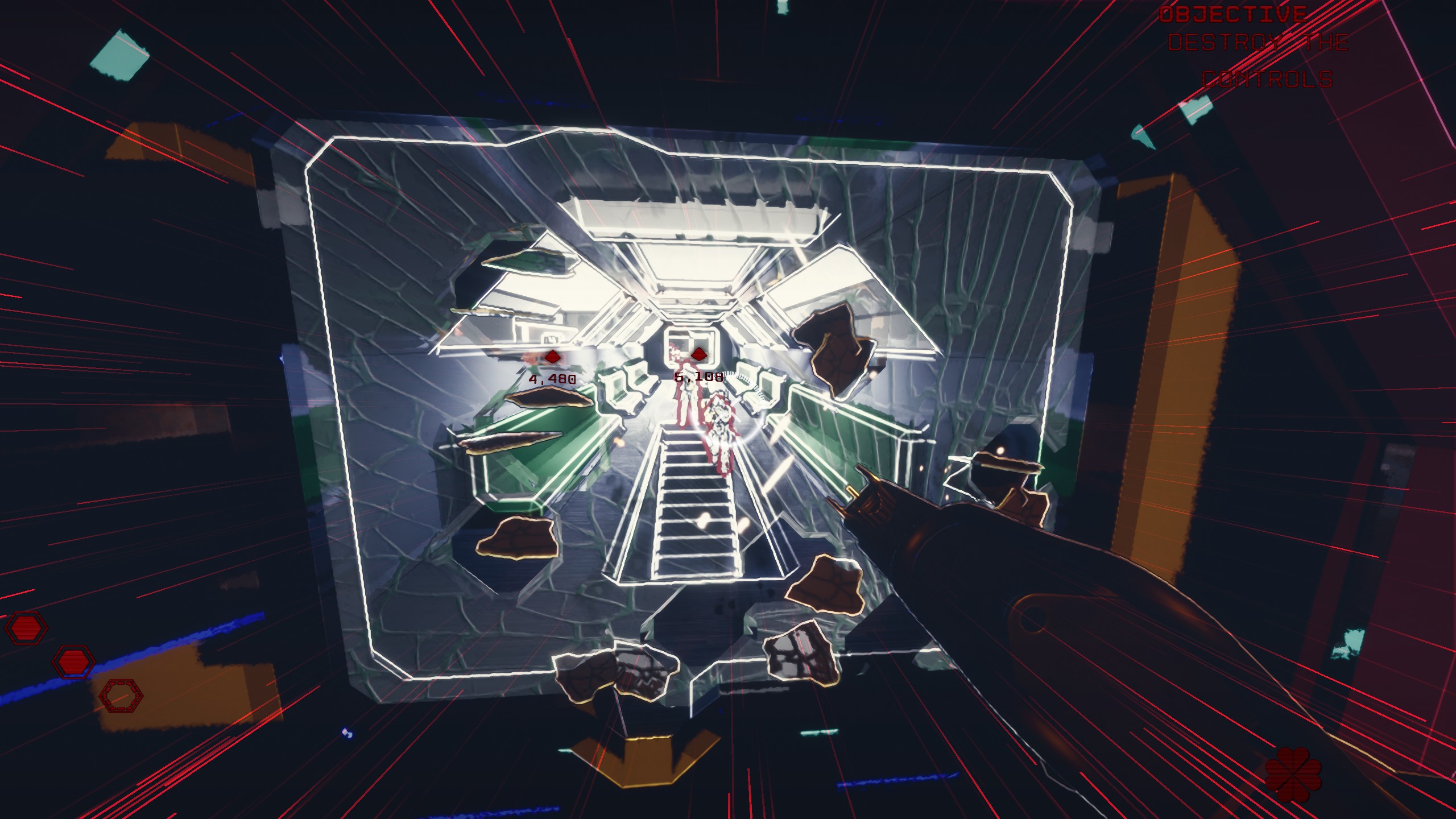 This isn't the sum of your abilities either. After a few levels spent learning the fundamentals, your protagonist gets her missing arm replaced with a hulking energy cannon that can blast gaping holes in virtually any surface. You can perforate walls to prevent them from interrupting your flow, and obliterate floors so that enemies fall to their deaths. This ability isn't limited to specific surfaces either, entire levels can end up pock-marked with glowing orange gouges.

As a fan of shooters that embrace momentum and dynamics, I can't help but admire Severed Steel's commitment to never-ever standing still. There are several neat little touches I appreciate too. Kicking down a door, for example, will see it fly off its hinges, killing any opponent that's behind it. Levels are also built with your potential trajectory in mind, with windows always positioned at the perfect spot for diving through. 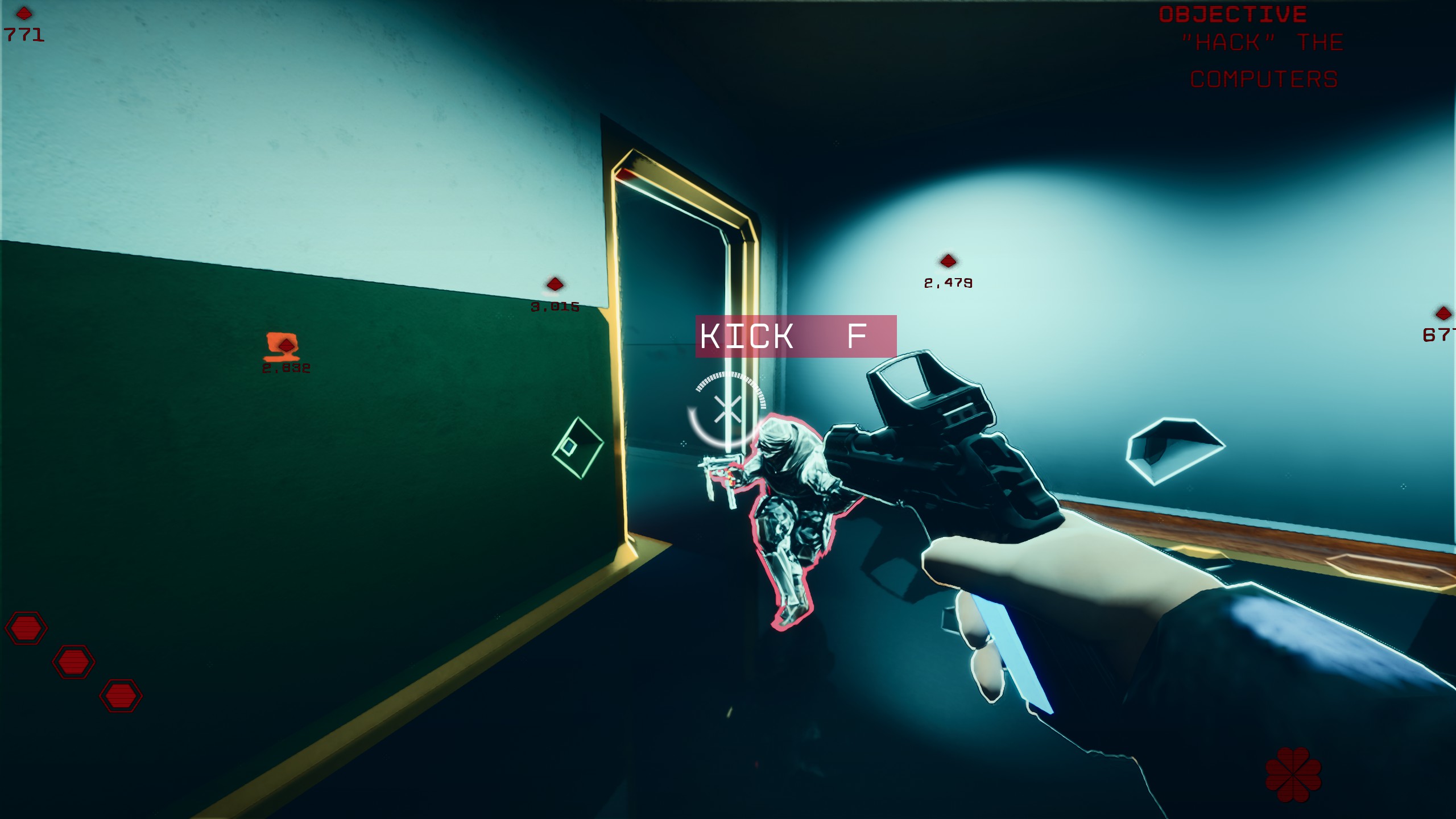 Unfortunately, the levels are where my problems with Severed Steel begins. Severed Steel is a brief affair, clocking in between 2-4 hours. While I'm not going to hold that against it, all its levels are also extremely short, to the point where they don't get a chance to explore their own concepts. For example, one of the mid-game levels is a classic train scenario, with you starting at the back of the train and working your way to the front. But rather than using this to come up with some creative scenarios, you shootjumpdive to the front of the train, blow up the controls, then jump onto another train to escape, with the whole level lasting as little as 40 seconds.

Every stage is like this, introducing an idea but ending before you've had a chance to appreciate it. It's like speed-dating with level design. Sure, there's a thrill in dashing between all these sexy concepts. But I quite liked that one with the big fans I needed to turn on to ascend a giant shaft, and it would have been nice to spend more than two minutes listening to it talk about its job. 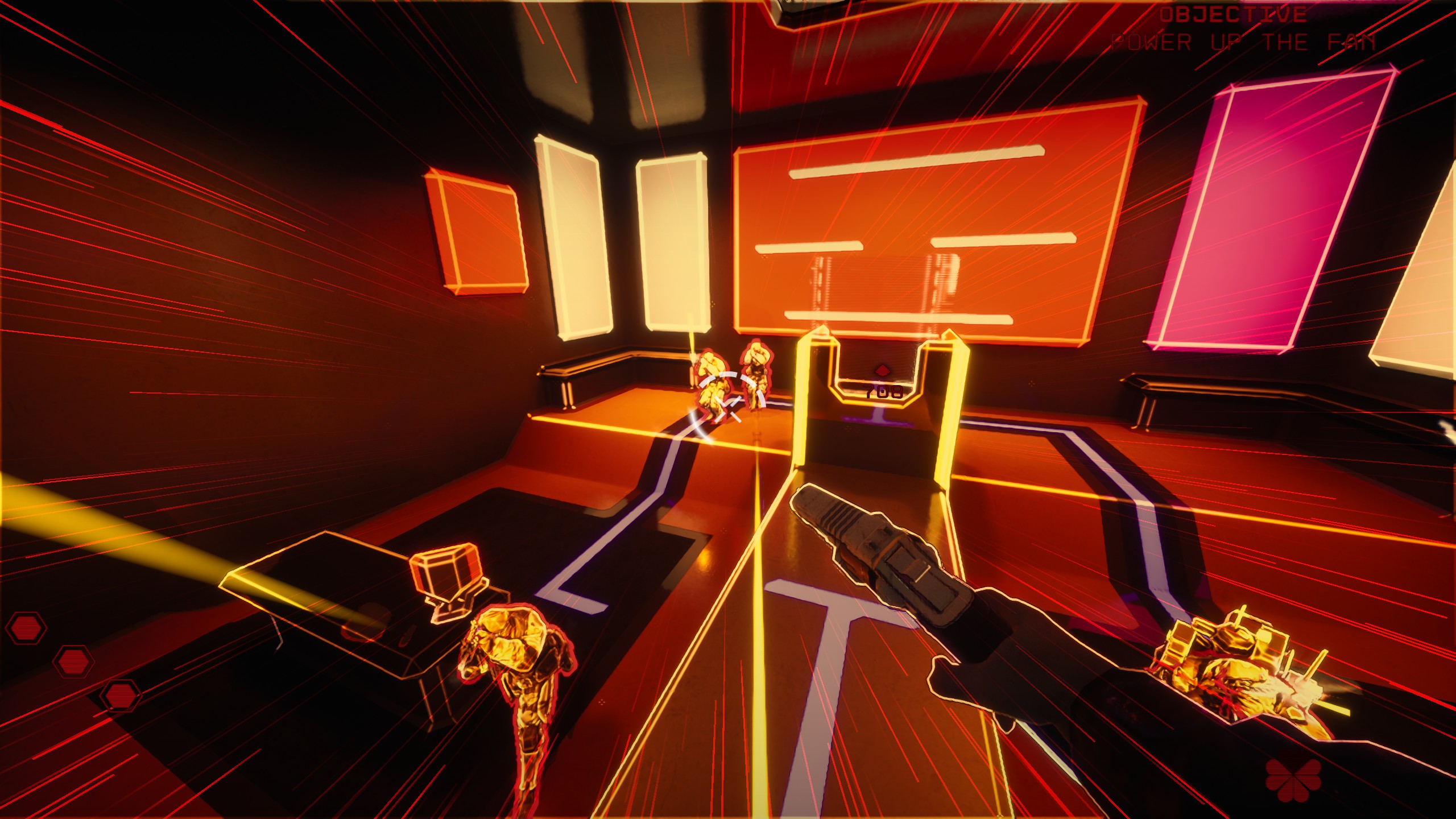 This lack of structure is an issue across the campaign itself. Even if an FPS doesn't have an explicit story, it should have a clearly defined arc. Each level should introduce a new weapon or a new enemy, or find ways to subvert our expectations of what's gone before. DUSK is a fantastic example of this, starting off as this grungy backwoods FPS and gradually becoming bigger and weirder and wilder, toying with classic FPS conventions to create something truly original.

Severed Steel doesn't really have an arc. It just throws stuff at you. There are a ton of weapons, but I never really had a chance to appreciate them, while your enemies look so similar that it was only when one started firing rockets at me that I realised there were different types. The game basically pours all its cool stuff into a trough and expects you to shove your face into it. And while there's interesting bits I can pick out, they're all floating around randomly in a nondescript neon soup. 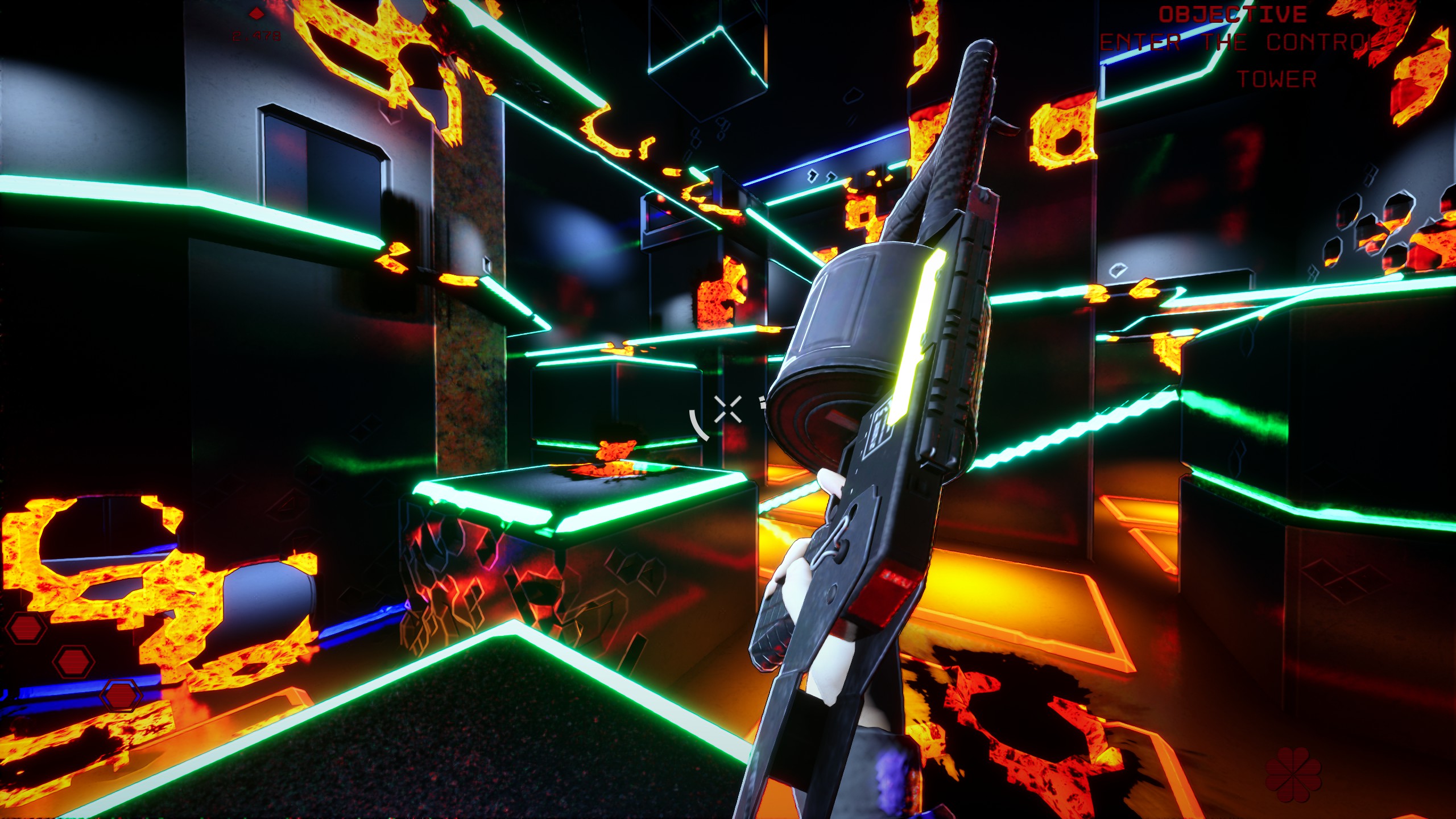 There are other issues too. While the movement is well-designed, the actual gunplay is lacklustre, deriving from some weird choices in sound design. To begin with, the music overwhelms the game's own audio, drowning out the sounds of weapons and enemies with it pulsing synth beats. Moreover, when you use bullet-time (which in Severed Steel is basically all the time) the game decreases the volume of weapon sound effects to the point where they're barely audible. It's a shame because the effects themselves seem fine, but all I could hear was the "pop" noise that signals when you've killed an enemy.

Severed Steel has the core of a great FPS. The movement is great, the destructible environments work brilliantly, and the weapons and enemies are all well designed. But for all its cool moves and visual razzmatazz, it fails to build these components into a meaningful experience. 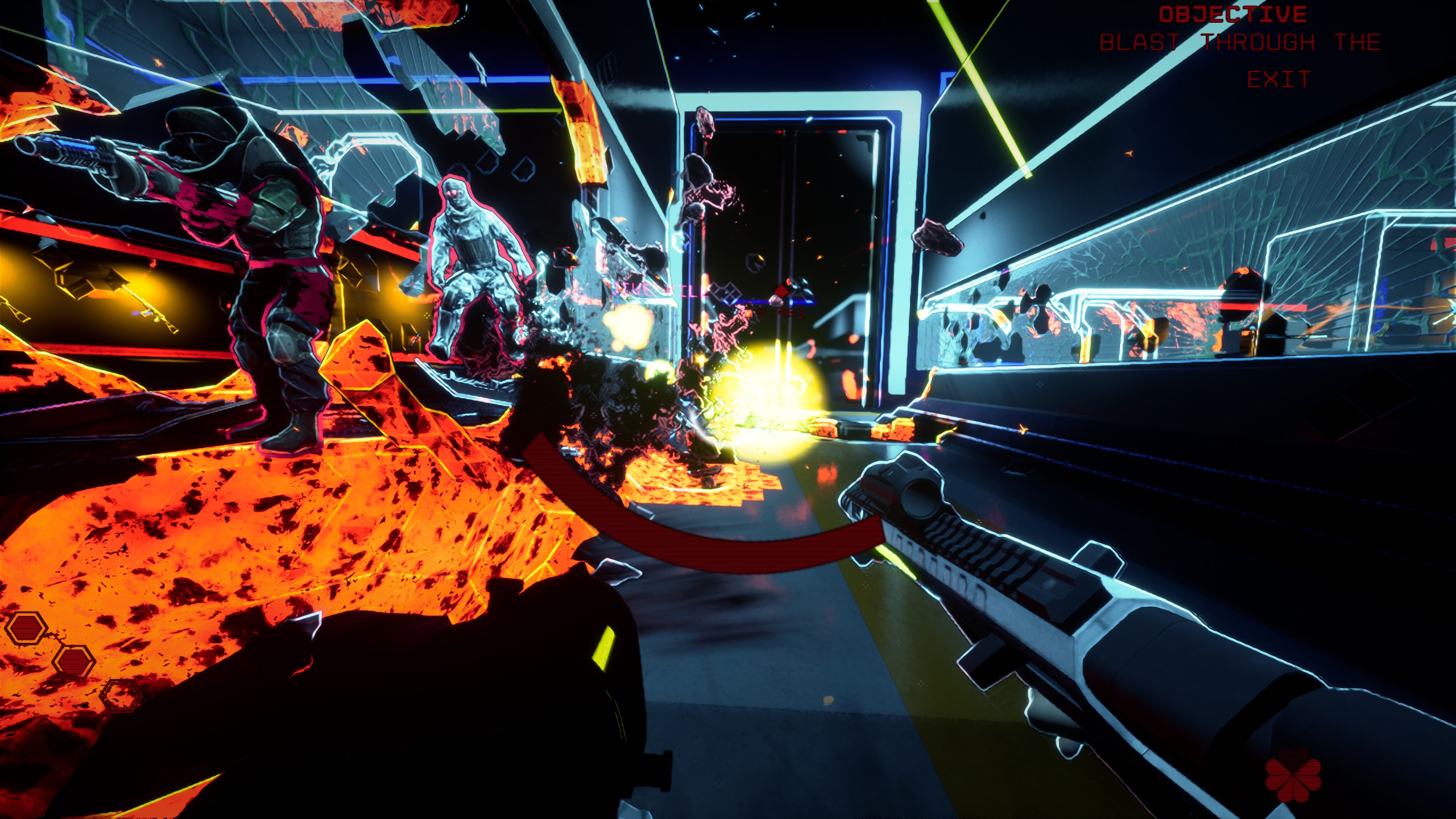