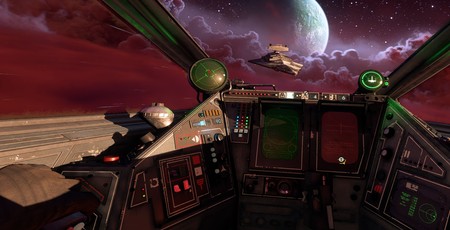 2020 may have sucked harder than a black hole created by Dyson, but if there is a silver lining to this roiling thunderhead of a year, it’s that EA has finally released a Star Wars game that’s actually good. Not just good, great, in fact. Star Wars: Squadrons is comfortably the best Star Wars game released since The Old Republic, and possibly as far back as the original Kotor. Heck, it might even be the best Star Wars thing to come around in years. It’s certainly a whole lot better than the Rise of Skywalker. Squadrons is a proper, full-blooded space-combat game, a spiritual successor to games like X-Wing, TIE Fighter, and X-Wing versus TIE Fighter. It’s a straightforward, no-nonsense experience about getting into natty space dogfights, weaving through the inky void to keep an enemy ship in your targeting reticule while simultaneously avoiding being turned into space junk yourself.

From the moment you step into your first TIE fighter for the tutorial, Star Wars: Squadrons feels utterly fantastic. The flight model is pure arcade joy, much faster and more responsive than other contemporary space sims like Elite Dangerous. Combat, meanwhile, is thrilling and spectacular. As you blast an enemy TIE fighter with your X-Wing’s lasers, their ship will begin to trail fire, while a well-aimed proton torpedo will cause their ship to burst like a tiny supernova. If you played LucasArts’ Star Wars combat sims, you’ll feel right at home in Squadrons, as it imports many of the key mechanics from those older games. This includes missile locking and tracking, targeting computers, and most importantly, power-shifting. Power-shifting is key to Squadrons’ tactical play. By pressing the number keys, you can shift your ship’s power to prioritise different systems. Prioritising engines will increase your ship’s speed, enabling special moves like boosting and “drifting” (fast, inertial 180-degree turns). Shifting to lasers will increase the fire rate and recharge speed of your weapons, and if your ship has shields, then shifting power to those will help them withstand greater bombardment.

Power-shifting is the motivator in Squadron’s hyperdrive. During combat, you’re constantly tinkering with the systems like an electric guitarist messing with their effects pedal. Approaching a rebel Corvette in a TIE Interceptor, you’ll crank up the engines as you chase down a target, flip to weapons to rake the ship’s flanks with laser fire, then flip back to engines as you flee from their superior firepower and prep for another strafing run. You can also make more specific adjustments, too. Rebel ships can divert power specifically to front or reverse shields, while Imperial ships can temporarily shunt all their ship’s power into one system, shutting down engines for a massive laser burst, or vice-versa. Squadrons’ mechanical depth is perfectly pitched. Its controls are easy to learn, but there’s enough nuance to the combat ruleset to enable tactical play. For example, smaller ships can fly underneath the shields of a larger ship, able to directly target the hull. Doing this requires precision flying, and it’s absolutely thrilling to pull off. But it’s a dangerous manoeuvre. As well as risking being torn up by a larger ship’s superior firepower, small ships can also burn up if they get too close to the thrusters of a larger ship like a Star Destroyer.

Such tactical nuance is important for making the game’s multiplayer function. Squadrons’ multiplayer is a surprisingly slender affair. There are only two modes, dogfight and Fleet Battles, both of which limit the player count to 5 versus 5. In practice, this turns out to be the right scale, giving players enough room to actually participate in duels and teamplay, without the whole thing descending into chaos. Fleet Battles arguably benefit more than dogfights, as these are more strategic affairs whereby players push through space to reach and ultimately destroy the opposing team’s Capital Ship. It’s basically Battlefield’s Rush mode, but in space. Having a diverse Squadron is crucial to victory in Fleet Assault. Bombers like Y-Wings are important for dealing heavy damage to larger ships like rebel Frigates and Star Destroyer, while Imperial squadrons need a TIE Reaper to deploy shields for their squadmates, keeping them in the fight against the more durable rebel spacecraft.

Overall, Squadrons’ multiplayer is good fun. Fighting against human opponents is undoubtedly where the combat is at its best. That said, there are questions over the multiplayer’s longevity. EA has already stated that there will be little in the way of post-release support for Squadrons, which is a darn shame given it's the best Star Wars game they’ve published (and the best multiplayer game since Titanfall 2). Fortunately, the real gem of Squadrons is not its multiplayer, but its single-player campaign. Far from being tacked on, the campaign offers 16 brilliantly-crafted missions that see you alternate between a rebel and imperial pilot as the New Republic seeks to finish off the fractured Empire in the wake of the Second Death Star’s destruction.

Squadrons’ campaign is genuinely one of the best single-player experiences I’ve had all year. To start off, it's superbly written, particularly the chatter of rebel AI squadmates, who lend the whole campaign a sense of camaraderie and derring-do. Your Imperial squadmates are obviously less likeable. But the game does a good job of contextualising their allegiance to the Empire, making their motivations comprehendible, if not exactly commendable. Highlights include Frisk, the rebel Transhodan pilot who is basically Han Solo wearing a crocodile costume, and Shen, a veteran TIE fighter pilot who’s had one too many hard landings, and is now permanently trapped inside his helmet, Darth-Vader style. But it’s the individual missions that make Squadrons’ campaign such a thrill.  Each one is unique, and does a fantastic job of keeping the game’s core dogfighting feeling fresh and surprising. It also doesn’t procrastinate on getting to the good stuff. The second mission sees the rebels attempting to steal a Star Destroyer as part of a secret project, and it gets better from there. There are raids on rebel stations, scouting missions that inevitably turn awry. One of my favourite Imperial missions involves tailing a rebel fleet through a debris field, when the arrival of another Star Destroyer throws the entire plan into chaos. It bears a lot of similarity to a Call of Duty campaign, but the fights are actually dynamic and systems-driven, rather than oppressively scripted shooting galleries.

There’s little wrong with what Squadrons presents you with. It looks spectacular, it feels great, and it’s clearly been developed with a huge amount of love. But there are areas where it could be more fleshed out. For example, it’s a shame that you can’t wander around hangars in between missions. These are huge spaces with loads of incidental detail. Stormtroopers patrolling, Rebel pilots rushing around, ships taking off and landing. It’d be wonderful if you could explore these spaces freely, but instead you’re locked into a limited number of perspectives. Freedom of movement would also add some dynamism to the optional dialogue sequences with your squadmates. While well written, they nonetheless feel stiff and awkward, like standing in front of an automaton at a museum exhibit or a theme park. Before we finish, there’s one last feature of Squadrons that cements it as one of favourite gaming experiences of this year – VR support. Although Squadrons is still fantastic fun on a flat screen, in VR it is positively transcendent. There’s a practical element to this - the ability to freely look around your cockpit is helpful for chasing down enemy ships, keeping them in your vision as they veer off to the sides. Mostly, though, VR just adds immensely to the immersion factor of Squadrons. It’s awesome to be physically placed inside a Star Wars battle. You get a true appreciation of the relative size of all the ships, and at various points my stomach actually dropped out, rollercoaster-style, as I was banking and weaving through battles.

However you experience it, Squadrons is an excellent game. But if you’ve got a VR headset, it’s an absolute must-play, the most fun I’ve in VR since Half-Life: Alyx. Being surrounded by an X-Wing cockpit as you fly along the underside of a Star Destroyer, its green turbolasers pinging off your shield like gravel off a windscreen, it’s proper wish-fulfilment stuff. If nothing else good comes out of EA’s handling of the Star Wars license, then Squadrons will have made it all worthwhile.