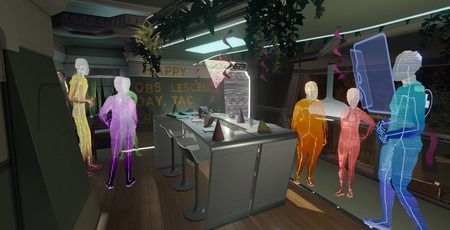 One thing I've often lamented about walking simulators (or to use the more modern parlance, narrative adventures) is how they isolate the player in a dead world. From Dear Esther to the Vanishing of Ethan Carter, these are games that are more dedicated to storytelling than most. Yet they lack one of the most fundamental components of good storytelling – characters.

In nearly all these games, the individuals whom the story revolves around are either dead or gone, and although we may piece them together from books, notes, clues in the environment, audio diaries, they're always positioned out of reach from the player, a voice in your head to be listened to but never encountered or interacted with. On the surface, Tacoma is no different. Once again the adventure takes place in an abandoned place. This time it's a space station orbiting the moon that the crew has been forced to evacuate, and you're tasked with picking through their memories to piece together their story.  But where Tacoma diverges from the norm is those memories are presented to make it feel like the crew are still aboard the station, and this has a dramatic effect on both Tacoma as a story and Tacoma as a game.

You play as Amy Ferrier, a subcontractor to the Venturis corporation, who is dispatched to the research and cargo station Tacoma to retrieve an AI that was developed there by the crew prior to their evacuation. It's a relatively straightforward job that involves downloading the AI's memory from several access points around the station, before retrieving the AI core from the network centre. While waiting for the AI to download, however, you're encouraged to poke around Tacoma's facilities and crew quarters, and it's in these human spaces where Tacoma's tale unfolds. Unlike most narrative adventures, which rely on audio-logs and scattered notes to tell the story, the Tacoma station is equipped with an augmented-reality system that records the movements and voices of the crew as they go about their business. These recordings can be played-back, rewound and fast-forwarded, with each crew member represented as a brightly coloured outline.

The result is that, although the crew are not physically present on the station, it feels like they are. The success of this storytelling method is in large part due to the exceptional work done by Fullbright representing the crew through writing, acting, and art. Indeed, what's immediately striking about the crew is how distinct they are in body size and shape. It's unusual to see different body types depicted in a game in a way that doesn't caricature them, and this greatly helps to humanise what are essentially faceless holograms. This also acts as a subtle introduction to the rich cultural diversity of the station. Each of the characters has a unique and highly detailed background that emphasises both their personality and how they relate to the other members of the station. Tacoma presents us with a future where cultural and lifestyle differences have largely been set aside, where social debate revolves not around race or sexuality but whether a person was screened at birth for congenital defects.

It's important to point out that none of this is paraded or fixated upon by the writing. Instead, it decorates the station like a natural part of the environment, forming parts of characters' personalities alongside a whole bunch of other influences, from musical tastes to their relationships with people back on Earth. A great example of Fullbright's subtle storytelling is how the station's doctor appears to be obsessed with a social media star, whose shtick is to travel around the world sampling different egg-based recipes. It appears to be an amusing aside. Rummage around in the medical bay, however, and you'll learn that her relationship with this star is much more personal and much more tragic than is initially apparent. Anyone who has played Fullbright's previous game Gone Home will know its storytelling chops are top-notch, as is its talent for environment design. The Tacoma station is an elegant blend of believable functionality and futuristic tech. I particularly enjoy transitioning between the zero-g hub of the station and the spokes which revolve around it in order to simulate gravity. It's also a place that has been transformed over time into a home by the people living there. Food packets and drinks bags litter the environment, while posters, notes, and even murals adorn the walls. These details also do a lot of work on fleshing out characters. In the doctor's locker, for example, I discovered posters and magazines dedicated to women's bodybuilding, while in the engineer's quarters the waste basket was filled with letters of rejection from various corporations.

The plot itself is largely divulged through four or five extended “scenes” in which most if not all of the crew are present. In each of these scenes, the characters will walk around and drift amongst one another, having different conversations with different people, or seeking out solitude to try to comprehend what's happening on the station. The beauty of this is that you can engage with each scene from multiple angles, following one group of people around, then rewinding and following another to get an entirely different angle on the same scene. Tacoma brilliantly depicts how we wear different faces depending on who we're speaking to and how we act differently when alone or in company. What's more, this system makes the story feel highly interactive. Even though you're not able to influence these events directly, each time you play through a scene you get a new perspective on it, how gestures and postures reveal the emotional states of the crew, and how they lead to secrets and cubbyholes dotted around the station. There's even a slight puzzling element to these recordings. For example, you can follow a hologram to a locked door and watch them input the  code so you can then use it.  That said, I felt this is one aspect of Tacoma's AR system that is somewhat underserved, with only a handful of such puzzles in the game. It is primarily a storytelling device, and perhaps more could have been done to let the player play with the concept.

Nonetheless, for a game that can be completed in a couple of hours, Tacoma explores a huge number of ideas. Alongside all the individual traits of the characters, their diverse cultural heritages, their needs and wants and fears, are broader themes that emerge from its science-fiction setting. The future Tacoma depicts is probably best termed as “soft-cyberpunk”, tackling ideas such as the value of human life against the profits of megacorporations, and mulling over at what point an AI becomes deserving of similar rights and treatment to a human being. If there's a criticism to be had of the plot, it's that the big twist is somewhat clichéd. Nevertheless, it's delivered in a way that still makes it emotionally affecting. As you can no doubt guess, I enjoyed playing Tacoma a lot. It's clever, it's inventive, it's vibrant and colourful in both setting and the portrayal of its characters, and although it may be fleeting, it doesn't waste a minute of your time. It's a great story told with succinctness and heart, and another little step forward in the evolution of narrative adventures. Microgravity twist for next exploration title.