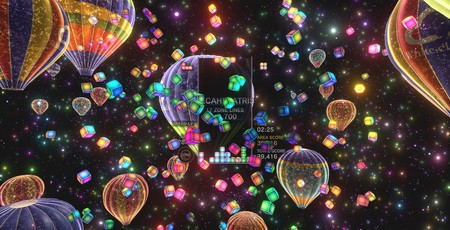 I’d heard a lot about Tetris Effect during its time as a PS4 exclusive, how it was this supposedly transcendental experience that reinvented what is possibly the most iconic puzzle game ever made. As much influenced by games like Rez (by the same developer as Tetris Effect) as Russia’s most famous virtual export, Tetris Effect was a regular contender for 2018’s Game of the Year. For some reason, I imagined it to be a sort of Journey-like experience, a peacefully hypnotic adventure through the medium of Tetrominos. Having played the recently released PC version, it turns out that behind its pleasantly psychedelic exterior lies a vicious bastard of a game that’ll beat you around the head with one of its awkwardly shaped blocks.

Now, there’s probably a fair number of you reading this and going, 'Uh, yeah, Rick, that’s Tetris.' And fair enough. But I didn’t know this, or at least I had forgotten it. Moreover, I reckon there are plenty of other people who haven’t played Tetris in a long time (or indeed at all), and assume it to be a simple, chilled-out way to pass the time. So, fair word of warning: Tetris Effect is not a game you play to chill out to. Instead, it’s a game you play to disappear into. The game is, ultimately, Tetris with a few extra mechanics attached. I’m not going to explain the rules of Tetris here. It’d be like explaining the rules of Chess, or the plot of Jaws. If you don’t know, go educate yourself and come back.

Tetris Effect, on the other hand, is a meditation on what Tetris is, and what it does to people who play it. The name is not chosen casually. The Tetris effect is a real phenomenon that can affect people who play certain kinds of games for long periods of time. Tetris Effect’s goal is, in a sense, to elevate this phenomenon, to ingrain Tetris across not just your focus but your entire sensory being. It could be considered insidious, if it weren’t so darned beautiful (sometimes, things can be both - ed.). Tetris Effect helps you reach this state of nirvana first by breaking you down. Far from being the spa-like relaxation experience I imagined, Tetris Effect is seriously challenging and made an absolute mockery of my assumed capability with the game. I smugly went straight into the Journey mode on normal difficulty and was utterly blown out of its blocky water. I got stuck on the second level for an hour. It was quite a shock, actually, finding out just how much I suck at Tetris. It’s like trying to do a forward roll as a full-grown adult. You think it’s going to be easy because you remember it being easy. And then you try it and spend the rest of the day hobbling around, clutching at your back and cursing your ineptitude (...true - ed.).

Tetris Effect may be a harsh teacher, but there’s a method to its madness. It affixes your attention on that central well of squares, forcing you to focus utterly on where those blocks are, where they need to go, what’s coming next, what you need to fill that gap. Indeed, your eyes are so focussed on getting it right that, at first, you don’t even notice that Tetris Effect has smoothly invaded your ears. Like Tetsuya Mizuguchi’s classic Rez, every action you perform in Tetris Effect is closely connected to the audio and the soundtrack. Every spin of a block, every careful placement, produces a unique sound that, through some arcane sound engineering wizardry, matches perfectly with the backing track for the specific level you’re playing. In some levels it’s a short hum that turns your game into a chipper melodic chorus. In others, it’ll be a click of a cog falling into place, or the thump of a drum. In one of my favourite levels, the Tetrominos are turned and placed to the keynotes of a piano, transforming your game into an improvisational jazz number as you fly over the rooftops of a neon-soaked city.

As that last line indicates, it’s not just audio that plays a key role in Tetris’ Effect’s puzzling synaesthesia. Each level is accompanied by unique visual motifs that are in tune with the dynamic audio. One level might see you Tetris-ing in the depths of a rain-soaked forest, the blocks falling into place like autumnal leaves. In another, you’ll be arranging chunks of orange clay as spirit-like American Indians ride around you on horseback. Speaking of which, it’s worth noting that Tetris Effect is designed with VR in mind. It can be played without VR, but I strongly recommend using VR if you have the hardware. The way Tetris Effect uses the technology to surround you in its psychedelic visuals is genuinely astonishing, and fits perfectly with the game’s theme of losing yourself in Tetris. I will say, however, that unlike the audio, the visuals don’t always complement the experienced quite as successfully. Sometimes you’ll be so focussed on the game that you won’t have time to pay attention to your surroundings, and occasionally the visuals will actually distract you from the experience rather than adding to it.

Even in these less effective moments, however, Tetris Effect is a stunning game. Yet the secret sauce isn’t either the audio or the visuals. It’s the speed. Each level has a unique tempo to it. Some levels are consistently slow or consistently fast, while others will start slow and increase with speed. One of the best (and for me, most challenging) levels is Ritual Passion, a fiery Kecak dance which starts off relatively slow, before kicking into high gear in the middle, and ending at a blazingly furious speed. Ritual Passion is a fitting name for that particular level, as it’s the moment when, after battling with it over and over for ages, I finally cracked it and simultaneously went from grappling with Tetris Effect to falling in love with it. After that, I barely even thought about the act of playing and shuffling Tetrominos almost by instinct. I am become Euclid, arranger of Blocks.

While Journey Mode is the main event, there’s plenty else here to discover. From Mystery mode which throws randomisers like bombs into the mix, to target modes that have specific objectives like having to destroy a particular block. It even eventually reveals that relaxed side I initially thought the entire game would be, with games that don’t have a fail-state and a theatre mode that lets you experience the game’s gorgeous environments and music entirely on their own. A cynic might say Tetris Effect is just Tetris with some pretty lights and funky music attached, and to be fair they wouldn’t be entirely wrong. But the entire point of Tetris Effect is that, contrary to my initial assumption, it is not Tetris reinvented. What Tetris Effect does is encapsulate why Tetris was such a phenomenon when it first launched, and why it’s such an enduring mathematical masterpiece. All the snazzy effects serve simply to enhance the experience that Tetris always was. And it’s the precision and creativity with which Tetris Effect does this that makes it such an essential experience. Ubisoft to develop Tetris for PS4 and Xbox One A new study released by the University of Oxford shows that simple videogames such as Tetris can be used to treat post-traumatic stress disorders.