The End Is Nigh Review 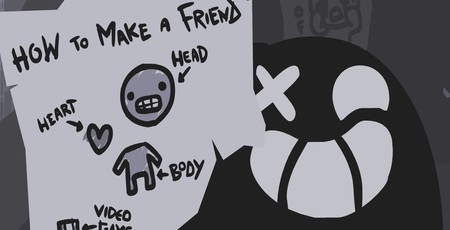 The End Is Nigh is a chunk of red flesh away from being a sequel to Super Meat Boy. There’s no escaping this and no point trying. Everything from the cheerful-grim protagonist to the meticulously designed and fiercely challenging platforming levels all harks back to Team Meat’s landmark platformer. It also makes this review interesting for me, because I wasn’t all that keen on Super Meat Boy when it splodged messily onto my hard drive. I admired its uncompromising vision and liked its kooky sense of humour, but it’s not a game that I would choose to play to blow off steam. Quite the opposite, in fact. Super Meat Boy is a steam-generator, a thrumming pressure cooker of a game, and I find life has enough in the way of pressure without adding to it unnecessarily.

So here we have a game that’s heavily influenced by another game which I distinctly recall not enjoying very much. And yet, I like The End Is Nigh quite a lot. I don’t love it, but I find I have an urge to keep playing where I didn’t with Super Meat Boy. That’s weird. Why do I feel like this? Let’s find out together. The End Is Nigh puts you in control of a character called Ash, a surprisingly upbeat lump of charred skin who happens to be one of the last survivors of the apocalypse. Ash is completely alone in the world except for his favourite retro video-game, but when the cartridge corrupts and the game stops functioning, he decides to head out into the great unknown to “make” a friend. Literally. Using tumours. Delightful.

From the outset, The End Is Nigh wears its similarities to Super Meat Boy on its sleeve. Starting out with a relatively gentle difficulty curve, the levels soon morph into nightmare mazes filled with spikes and spinning hammers and corrosive water and killer skull-dogs, all of which demands precision in both jumping and timing from the player. Initially, Ash can only jump, but more skills are unveiled as the game progresses, such as the ability to leap longer distances when hanging from a platform or smash through certain obstacles by hitting them at speed. There are some subtle differences between The End Is Nigh and Super Meat Boy, however. For example, each of the game’s levels is contained within a single-screen, rather than the level extending beyond the screen as with most platformers. This means you can see all the obstacles you need to overcome at a glance. In addition, it means that The End Is Nigh is broken up into smaller chunks than Super Meat Boy, so you’re less likely to get completely and utterly stuck on a particular stage.

This hints at how The End Is Nigh stands apart more generally. The game’s platforming is structured in ways that make it more accessible and less obstructionist than its inspiration. Many individual levels can be completed within a couple of attempts, but each level has a collectible 'tumour', which is placed so that collecting it makes that level considerably tougher. It may mean you need to go around the level twice, for example, or actually return from the screen you’ve just progressed to and proceed through an alternate route. I like this, because it means to a certain extent you can choose how sadistic you want the game to be. This is further evident in the broader structure of the game, too. Once you arrive at an area known as The Split, you can choose to head in one of several different directions. Down leads you to a place called The Hollows, a dark and haunting Moria-esque cavern filled with glowing skull creatures and collapsing spike tunnels. Head upward, however, and you’ll arrive at The Wall of Sorrow, a vast cliffside of moving spike-walls and crumbling platforms.

The developers have worked hard to ensure that each area has distinct theme and that the area plays with and evolves that theme as you traverse through it. Early on, for example, you’ll come across an area called Overflow, which is flooded with water. The first couple of levels are easy enough, but then the water becomes polluted and will dissolve Ash if he stays in it for more than a few seconds. Just as you’re becoming accustomed to this, Overflow adds poisonous gas into the mix. Every area does this: introducing a concept, tweaking it, and then expanding it in various ways. Yet not only does The End Is Nigh offer you a choice of routes, you can also fast-travel between these areas at any point. Hence, if you’re struggling with progress in one area, you can leave and push in another direction. This comes at a price, however. Although you can abandon an area at any point, you can only return to the beginning of it. So sometimes it’s worth persevering to the next fast-travel point. The map screen clearly shows how long each area is, so you can always check to see if it’s better to stick or twist.

But the map of the world only shows a fraction of the available content. Secret areas abound, hidden by breakable walls and locked doors. What’s more, some of these areas contain collectible game cartridges, which you can return home to play on your console. Doing so reveals new, retro-vibed levels of all the areas you pass through and multiple new ones besides. Again, The End Is Nigh offers considerable leeway in terms of how challenging you want the game to be. You can mainline the core areas in a couple of hours if you’re talented enough, but for completionists there’s hours' more content on offer. The result of all this is The End Is Nigh is a ferociously challenging platformer but one that mediates that challenge in clever ways without ever resorting to compromise. It’s also a surprisingly likeable thing, with McMillen’s trademark humour juxtaposed thoughtfully against the game’s jet-black themes of death and desolation. I particularly like the spirits you encounter sat around the place, who offer you advice in a gently amusing fashion.

That said, there are a couple of issues. If you do want to explore everything the game has to offer, then you’re going to have to do an awful lot of backtracking through levels you’ve already played, which in a game as tough as this is decidedly not fun. Also, there a couple of little things that I find annoying and nonsensical, like the fact that spikes will kill you even if you brush against the side of them. I’ve died so many times simply because I kept forgetting that. Still, I like The End Is Nigh much more than I expected. It’s tough as nails but also designed with both skill and intelligence. The ability to explore in various directions and decide whether to pursue or ignore the game’s secrets and collectibles ensures that, whichever horrible way you choose to die over and over again, that choice is ultimately yours.