I find myself rather conflicted about The Evil Within, the latest game from Resident Evil creator Shinji Mikami. This may well be because The Evil Within is in many ways a conflicted game in and of itself. It is simultaneously an homage to and a distancing from Mikami’s most critically acclaimed creation, the brilliant Resident Evil 4. It is ambitious yet also conservative, technically superb yet also frustratingly restricted. It contains dozens of fantastic little moments, but ends up feeling like less than the sum of its parts. So it is perhaps unsurprising that I was both thrilled and disappointed by it.

This curious combination of reverence and disavowal is obvious within the game’s first ten minutes. The Evil Within opens to the blare of police sirens as detective Sebastian Castellanos races through the streets of Krimson City, in response to a call from Beacon City. Within thirty seconds of his arrival everything has gone wrong, and Sebastian is trussed up in a dingy basement, destined for the butchers’ block. Five minutes later he’s being chased through hospital corridors by a maniac wielding a chainsaw. Then the entire city collapses. It’s a heck of an introduction. Through it, Mikami grabs a fistful of your shirt and hisses in your face, “Remember me?" Yet it's as much about clearing the slate, briefly reminding you of past highs before demolishing your expectations to make way for something new.

At least, that’s the idea. In practice, The Evil Within amounts to a greatest hits album. It's a sequence of loosely connected locations which evoke many of Mikami’s previous games. And like a greatest hits album, although the individual songs are as great as they ever were, it lacks the cohesion, the finely tuned flow, of those original LPs. Plot-wise The Evil Within treads familiar territory in a way that is nevertheless intriguing. Very early on Mikami makes it clear that not all is as it appears. Something is clearly messing with Sebastian’s mind, subjecting him to all manner of delusions and hallucinations that affect his perception of the world around him. But The Evil Within keeps the precise nature of this unreality ambiguous, gradually fitting together the different pieces of the story.

This gives Tango Gameworks reason to throw out normal rules of reality. The Evil Within’s world is one where medieval market towns happily exist alongside Victorian mansions and towering contemporary cityscapes. Corridors stretch and shrink before your very eyes and gravity is a whimsical beast at best. Whenever you arrive in a new location, little or no context is given to how you arrived there. You’re expected to simply accept the situation, as you would in a dream. The advantage of this structure is it’s impossible to anticipate what is coming next. Each corner and doorway potentially conceals some surprise that will radically alter the current state of affairs. It’s also a clear distancing from Resident Evil 4. Instead of the slow build up and consistent, organically evolving environment design of that game, The Evil Within’s world is fragmented like a broken mirror, dangerous to touch and nigh-impossible to piece together. 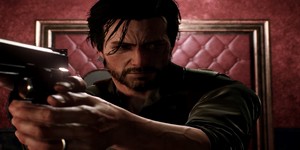 The Evil Within 2 is a safe yet considerably improved sequel.