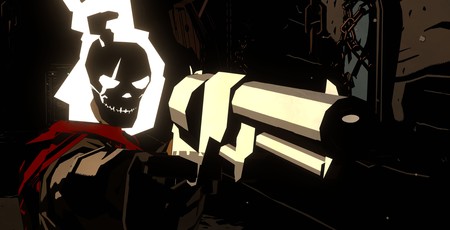 The debut title from Upstream Arcade (founded by Arkane’s former co-director Raphael Colantonio) West of Dead a shooter-cum-roguelike designed to look like a comic book and sound like raw testosterone. From its inky-black shadows through its steel-guitar soundtrack, to its gravelly Ron Perlman narration, West of Dead absolutely drips with style. I’m not sure the same can be said for ideas, however, which is unfortunate given ideas were Arkane’s raison d'être. West of Dead may look slicker than an oily snake selling snake oil, but in both concept and mechanics it is surprisingly derivative.

West of Dead places you in the spurred boots of a nameless and undead outlaw trapped in a brooding Wild-West-themed underworld named Purgatory. Spawning inside a saloon for the damned, your goal is simply to find a way out of this dry and dusty hellscape using your gunslinging skills. The game’s chief innovation is to blend twin-stick shooting with a classic rogue-like structure, and it splices these together competently enough. Each “Chapter” comprises a randomly-generated dungeon split into multiple rooms, each of which contains an assortment of enemies that need to be killed (again). As you progress, you’ll pick up new loot and new abilities, while the enemies you fight become tougher and more powerful.

The combat system certainly isn’t short of nuance. To fight the denizens of the game’s dusty underworld, you can equip two guns at any one time, hide behind cover, and roll to dodge attacks.  Hiding behind cover protects you from gunfire and helps you reload faster. But it also makes you vulnerable to being attacked by melee-based opponents, like shambling zombies and aggressive demon dogs. If one of these approaches, you’ll need to bug out quick, but this will leave you exposed to ranged enemies, and only a perfectly-timed dodge will enable you to avoid their attacks. Weapons, too, have a lot of variety baked into them. Pistols are quick to fire and reload, but do little damage per shot. Shotguns do considerably more damage, but only at close range. Rifles do high damage at long range, but take time to fire accurately. There’s overlap between these categories overlap too. The double-barrelled pistol, for example, acts as a middle ground between the pistol and the shotgun.

The minutiae of the combat system takes a while to absorb, and consequently your first few runs through West of Dead will fail spectacularly. Undeath is permanent in Purgatory, and any failure will catapult you right back to the start of the game. It will also cost you most (not quite all) of your upgrades in the process, which feels unbelievably harsh the first time it happens. Indeed, your first few hours of West of Dead may well frustrate, especially given there are a couple of enemies that can easily gank you. Having a good run killed stone dead by a single enemy attack, is the stuff broken keyboards are made of. Nonetheless, as you play, you’ll improve at feeling out each area and the enemies within it, and you’ll find eventually find yourself clearing areas that seemed impossible almost on instinct.

There’s a nice blend of planning and reactivity to West of Dead. Depending on the angle at which you approach a room, you may get a chance to look over the area you’re about to enter, and thereby adopt a more methodical approach to dispatching the enemies within. Alongside your basic abilities, you can also briefly “stun” opponents by igniting lanterns in the combat arena. As you play, you’ll also gain access to special abilities like a shield that temporarily blocks incoming damage, or sticks of dynamite that blow large chunks off enemy health bars. Whether you plan your approach or not, emerging unscathed from a fight is always enormously satisfying. Structurally, then, the core systems are well-thought-out. But the actual feel of the combat is somewhat underwhelming. In straddling the line between cover shooter and ARPG, it doesn’t quite enjoy the full benefit of either approach. Your guns don’t quite feel powerful enough, while your abilities aren’t spectacular enough. Successfully killing an enemy in West of Dead brings about a sense of relief more than it does triumph.

My main issue with West of Dead, however, is that throughout my time with I had an overriding sense that I’ve played this game before. Given the heritage of Upstream Arcade, I expected West of Dead to be more mechanically adventurous. I’d seen previews of the game which described as a top-down immersive-sim, but this isn’t the case at all. That isn’t necessarily the developer’s fault, it could simply be a miscommunication or a misinterpretation. But even considering West of Dead as an action rogue-like, I’d struggle to highlight anything in it that was especially original or different. If you like your roguelikes to be stylish and stern, then there’s little question that West of Dead has you covered. But while I found it intermittently diverting, I was never quite riveted by the experience. Upstream Arcade is clearly a talented studio. Let’s hope its next game pushes the boundaries a little more.