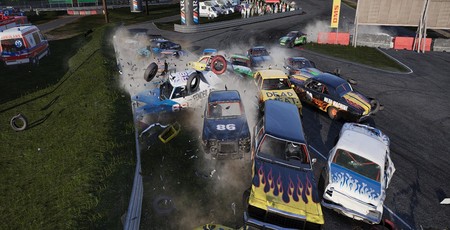 Yet at first Wreckfest seemed intent on avoiding any form of physical contact wherever possible. Its initial races were impossible to win unless you raced cleanly, and its much-anticipated destruction derby events were spoiled by cars so fragile that the only thing they seemed capable of destroying was themselves. Excuse me, Bugbear, but I came here to get annihilated by a group of grunting bangers with massive pistons and gaping exhausts, and when I finally get here, with my body freshly waxed and my crankshaft oiled, nobody wants to bloody touch me.

Then I entered a race where I had to beat two-dozen school-buses in a three-wheeled van, and it’s quite possibly the most incredible three minutes I’ve experienced in a video-game. Picture the scene. 24 huge, 13-ton buses pelting around an oval track, shunting into each other, tipping and rolling and crumpling, mounting one-another like an overwrought sexual metaphor that I’m increasingly concerned might get me fired. All of this is happening while you drive this tiny, skittish Reliant Robin affair, weaving desperately between explosions of sheer, unbridled carnage. There were moments when a literal pile of buses would block half the track. It was insane, it was absurd, it was frankly quite unbalanced, and it was exactly what I came to Wreckfest for.

This was the moment Wreckfest clicked for me, which isn’t to say it’s a game without problems. There were still peaks and troughs to my excitement, and there are a few questionable design decisions lingering beneath its bonnet. But for anyone who was put off by the game’s troubled Early Access period, I can confidently say that Wreckfest is good. It’s merely a question of how good. The basic structure could belong to any other racer. You’ve got your career mode, your custom-race mode, and your multiplayer mode. Most of my time was spent with the career mode, which takes you on a gradually escalating journey from a wannabe joyrider to the highest tier of vehicular demolition. Each tier of the career mode comprises a variety of different events, from (relatively) straightforward races to more destruction focussed scenarios, to quirky special events such as Lawnmower racing. To progress up the ranks, you need to accrue a certain number of points across all events, while also earning money and unlocking vehicles so that you stand a chance of succeeding in those higher tiers.

Let’s face it though, we’re not really here to win, we’re here to break stuff, and at first Wreckfest seems to struggle to balance its racer trappings with its wrecker’s soul. Alongside your straightforward objectives of win the race or survive the derby, you also receive bonus objectives like 'spin out three opponents' or 'deal 500 damage'. These are clearly intended to encourage destruction. But initially, it isn’t really possible to do these and win the races. Crashing into other cars during races usually results in a loss of position, while being over-eager in destruction derbies ends in an early exit. As it turns out, this isn’t because the game is fundamentally flawed; it's a consequence of Bugbear being over-cautious in doling out the fun. Once you’re past the introductory stages, the racing and the destruction knit together much more neatly. You’ll encounter more tracks designed specifically to encourage destruction, such as figure-of-eight tracks with an intersection of the centre, or tracks arranged as an arcing line with two tight loops at either end like a knotted rope. Meanwhile, the standard tracks also become more wreck-centric, as Bugbear layers in more hazards like tyre walls and concrete barriers that obscure portions of the track.

Higher level vehicles are also more damage-centric, able to both take and deal more damage. It’s worth noting that the actual damage modelling Bugbear has created is fantastic. Cars can crumple up like an empty crisp packet, and lose almost all of their bodywork until you’re driving around in little more than an engine strapped to an axle. Even small collisions will trigger a shower of sparks and paintwork. The sound design is similarly excellent, from the grunt of engines at the start line to the tortured squeal of twisting metal upon impact. Whenever a car smacks into a concrete barrier, the resulting crunch is sufficient to make you physically wince. By the time you’re in the semi-professional leagues, the first corner of virtually any race becomes a moment to savour. The driving AI is pleasantly balanced. Opponents are more aggressive than you’d find in a standard racer, but not to the point where they easily lose control. You can also tweak the difficulty in various ways until it suits your play-style, although I was happy to leave the settings at their default state.

While the general curve of the game is one of improvement, there are a few flaws. Firstly, the replay system is bizarre. In some ways it’s really well-designed, letting you choose from a multitude of camera angles and select which car you’d like to follow. But it also doesn’t have a rewind button, which is just weird. It lets you speed up and slow down the replay, but if you want to go back at all you have to restart the entire recording. In fact, the game’s UI design is suspect in general. The menus are incredibly messy, with bits of information scattered in a seemingly random order. I’d played about five hours of the game before I figured out how to look at league-table standings mid-tournament. There are also no sound effects on menus whatsoever, which may sound petty to complain about, but it’s really noticeable when you actually play the game. There’s no track minimap for races, either, which is an unfortunate omission.

Lastly, there are a few balancing issues with regard to both the pace and difficulty of the game. The aforementioned schoolbus/van challenge was an incredible sight, but after playing it a dozen times to complete it, the novelty had worn off. Getting into first place – the requirement for completing the challenge – came entirely down to luck. Similarly, the idea of a destruction derby featuring 24 combine harvesters might sound like fun, but in practice it’s mostly frustrating. On the flip-side, some events are little more than dull filler, like a knockout race around a ridiculously small oval track. I feel like these issues, alongside the relatively substantial amount of time it takes to get to the good stuff, means that currently Wreckfest is priced a little highly for what it is. That said, it does ultimately succeed in its attempt to bring back the gleeful anarchy of Flatout and Destruction Derby, navigating that tricky balance between silly fun and serious challenge with only a handful of wobbles along the way. I’d certainly recommend picking it up; just be aware that the game is considerably better than it initially appears to be.