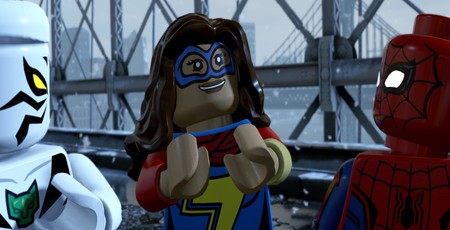 Someone at TT Games has read a lot of comic books.

Lego Marvel Super Heroes 2 starts with a big brash action scene that you might expect to see as the finale to one of Marvel's tentpole blockbusters, the Guardians of the Galaxy crashing into battle against big bad Kang the Conquerer, a time-travelling scientist that's never appeared in the Marvel Cinematic Universe but has been giving its comic book heroes a headache since his first appearance in the 1960s. 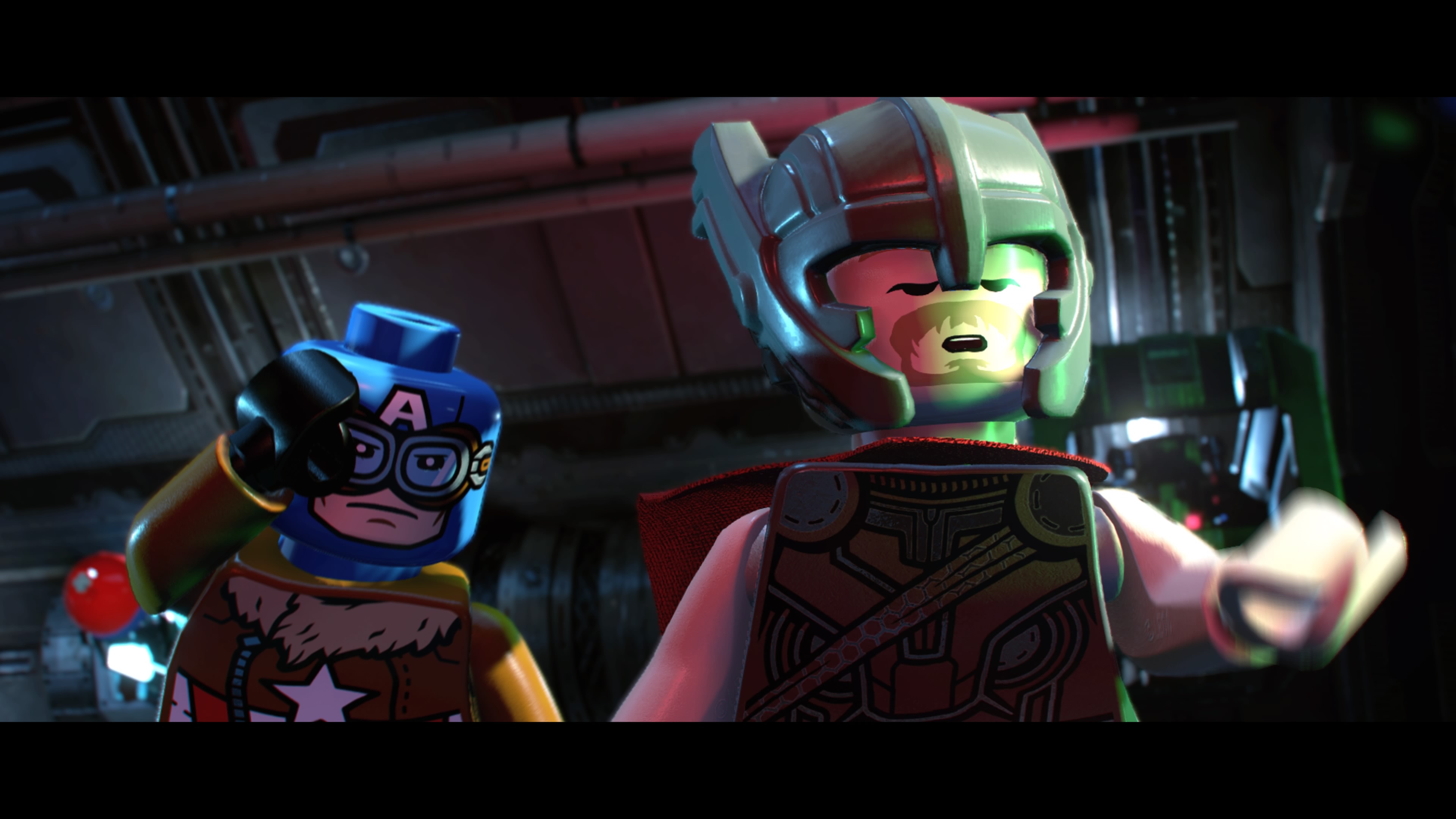 From here, the action in the unfortunately titled Lego Marvel Super Heroes 2 doesn't let up. You're whisked away and into the Avengers mansion, where a fast-talking Gwenpool explains that you're in a tutorial and that she's your in-game access to weird cheats, mutations, and other collectibles. Blink and you're underwater, Captain Marvel and Iron Man blowing up generators. Seconds later you're Ms Marvel and Spider-Man, the young Ms Marvel getting a selfie with the webhead and pointing out the similarities to her fan fiction.

All done with that? Great, time to go to Medieval England to batter Enchantress as Captain America and some of the Guardians of the Galaxy. After that, you can go to Wakanda. There's very little filler here in terms of plot, and the game is eager to vomit new characters and abilities directly at you. Many of these are ripped from the Marvel Cinematic Universe, with Hulk showing up in his current Thor Ragnarok incarnation, and Doctor Strange doing that weird portal thing he does in the most recent movie, but it doesn't stop there. 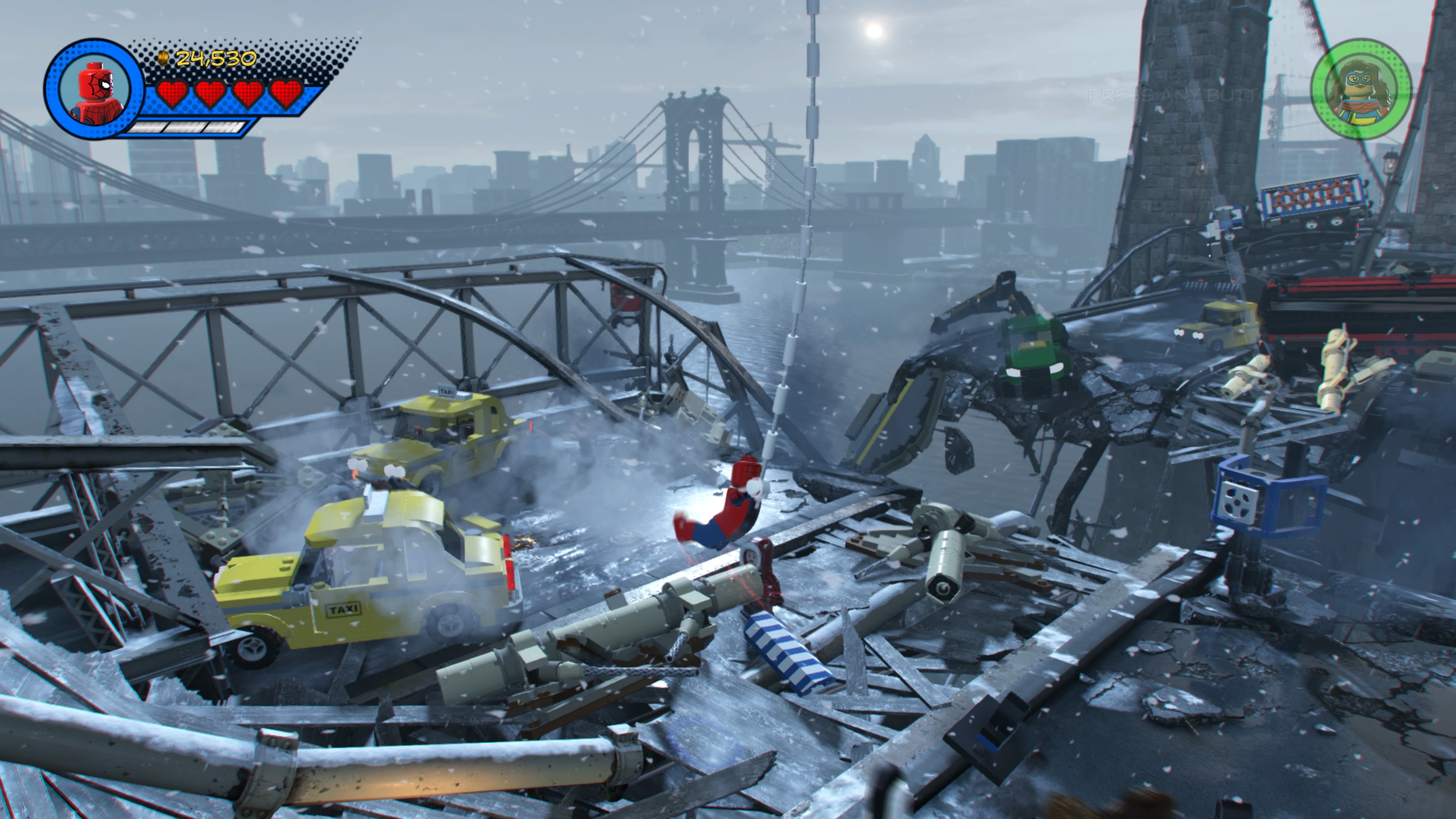 There are probably a few longboxes of vintage comics hidden around the place, because while several characters will be familiar to fans of Marvel's specific brand of blockbuster, characters like Captain Avalon, America Chavez and Hellcow are deep cuts, and largely the characterisation and writing for the characters is excellent. Drax's inability to grasp even slight metaphors had me chuckling repeatedly at the start of the game, but the farcical nature of the Lego games means the characters end up in ridiculous situations often.

In terms of writing and characterisation, this is probably one of the better Lego games, in addition to one of the best Marvel titles. Characters here are loved, and while the continued Fox and Disney bickering means we get obscure characters like Spider-Man 2099 or Baron Mordo, there's not a Cyclops or Wolverine anywhere to be seen. 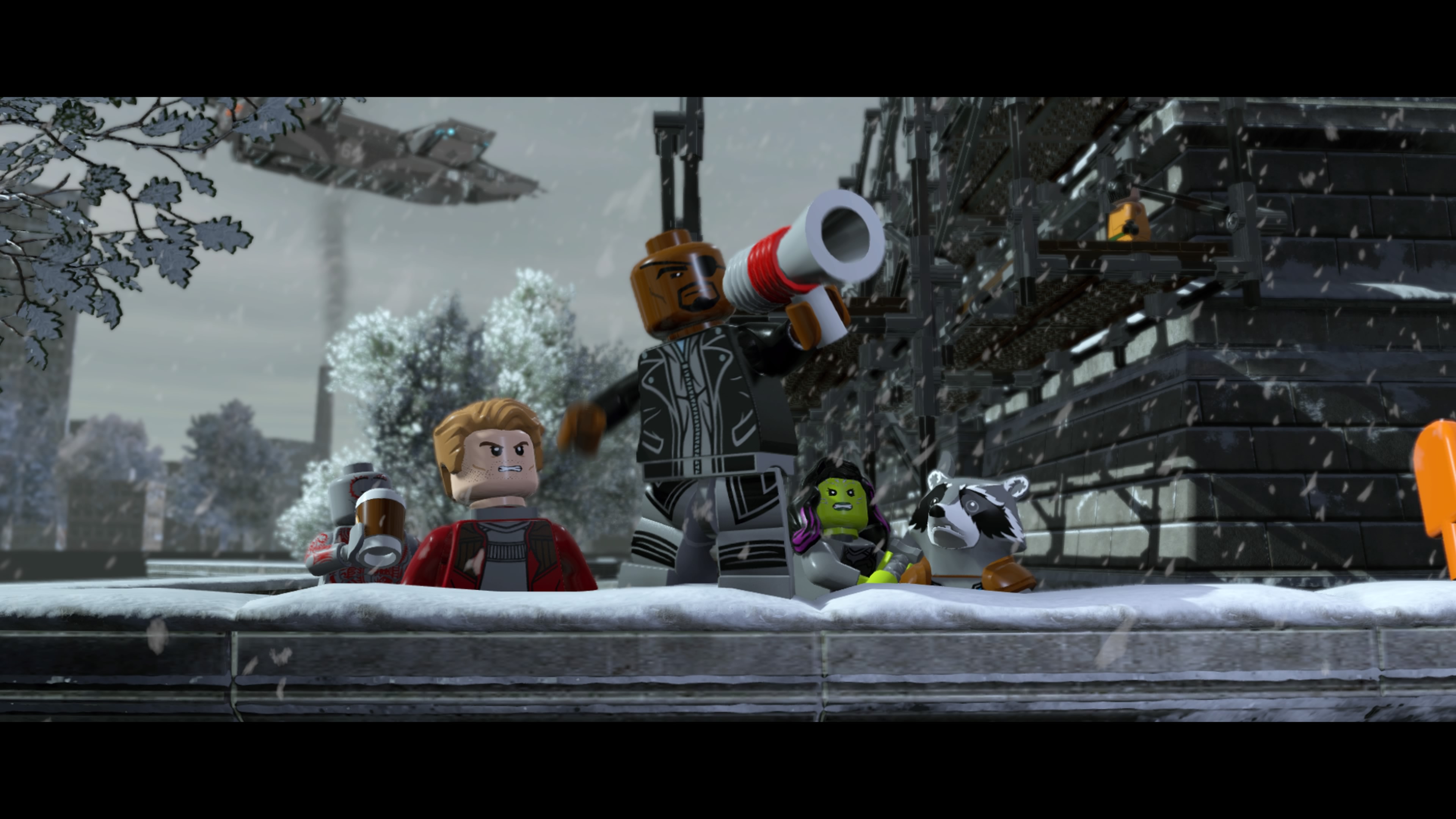 Still, you'll be spending your time with the B-team for a lot of the game's run, and this is a wise move. Popular Avengers spend less time as key plot points than their less-exposed colleagues, making the game feel like you're exploring more ground in the Marvel canon than merely experiencing the next adventure of Iron Man and his trusty band of superheroic punchfolk.

In aesthetics, too, Lego Marvel Super Heroes 2 nails it. Everyone is Lego in the game; that's the entire point. But the Lego-brick strands that Spider-Man uses to swing around the city are artfully done, and several cutscenes and visual gags work not just because of Lego's presence but because of the care and attention lavished on the process. This is crossed with a comic-book feel that sees the menu UI picked out in pop art splodges, a vividly coloured tribute to the comic books of yesteryear. 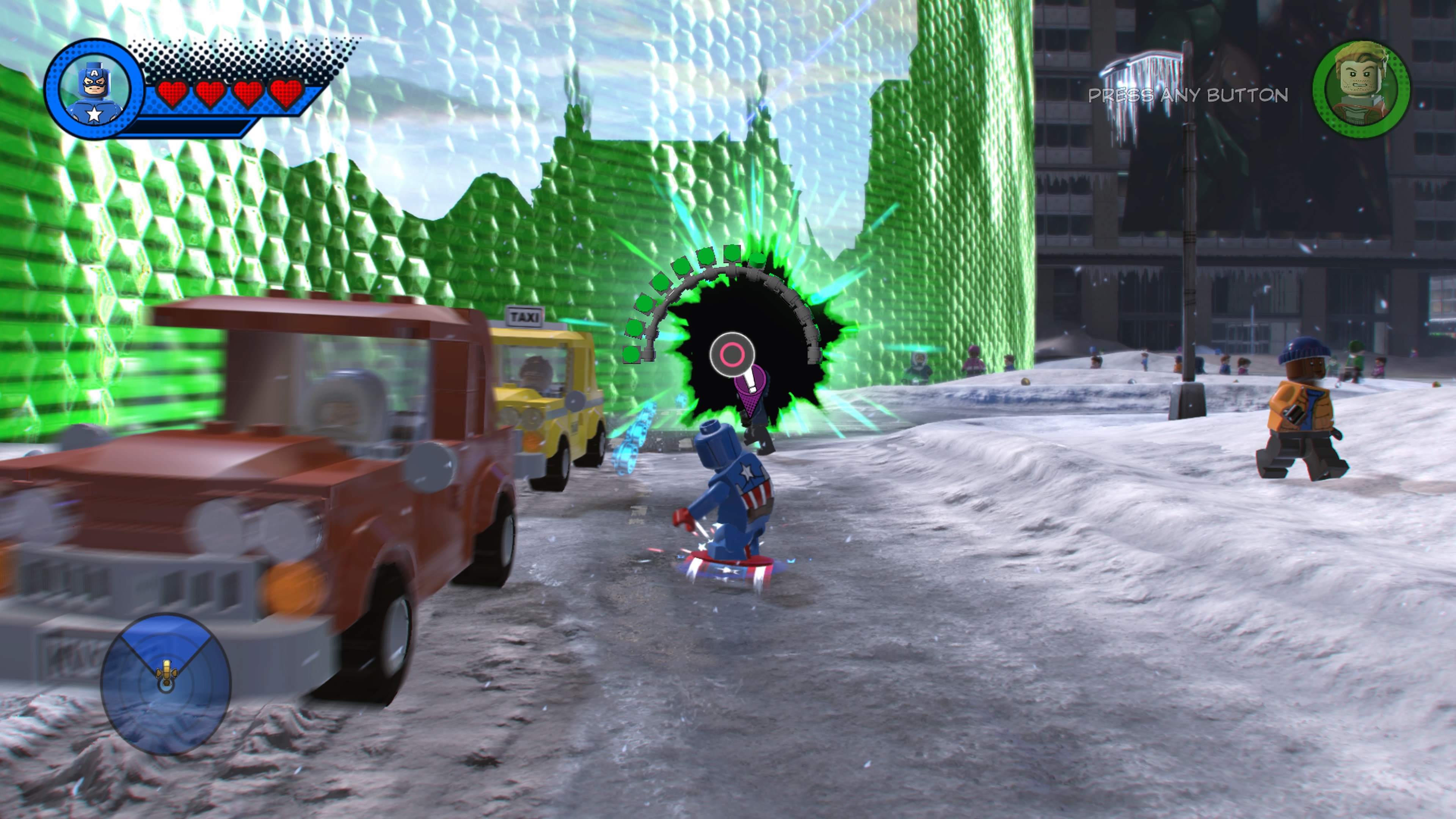 The formula for these Lego games hasn't changed a great deal since Lego Star Wars released back in 2005, and the formula will be immediately familiar to anyone who's so much as looked at a Lego game since then. You bowl through the levels solving puzzles with the judicious application of your character's abilities and a large amount of punching, frequently disassembling the world around you so you can put it back together again in a beneficial configuration. This is Lego's promise played out as a video game, and it's been the case for the last 12 years without any real innovation. Combat is clunky as you pitch into fights mashing the punch button, occasionally holding down the punch button to use a projectile attack.

Some characters liven up the combat by the use of their special move, which sees you holding a button for something different to occur. Some of these are awesome: Spider-Man pelts everyone near him with web blasts, Thor brings down the thunder onto his hammer and can use it to blast enemies within range, and Starlord brilliantly puts on his headphones and listens to the Guardians of the Galaxy 2 soundtrack as he fires his lasers randomly. However, many characters also have an ability that sees them holding down the button solely to unleash a charge attack or a flurry of punches. It's not the end of the world, but there was a chance here for every character to have a special move that highlighted their own unique abilities. Instead, while some characters shine, other characters are left in the cold able to flurry attack or turn into a ball and try to roll over people, which isn't as satisfying as it sounds. 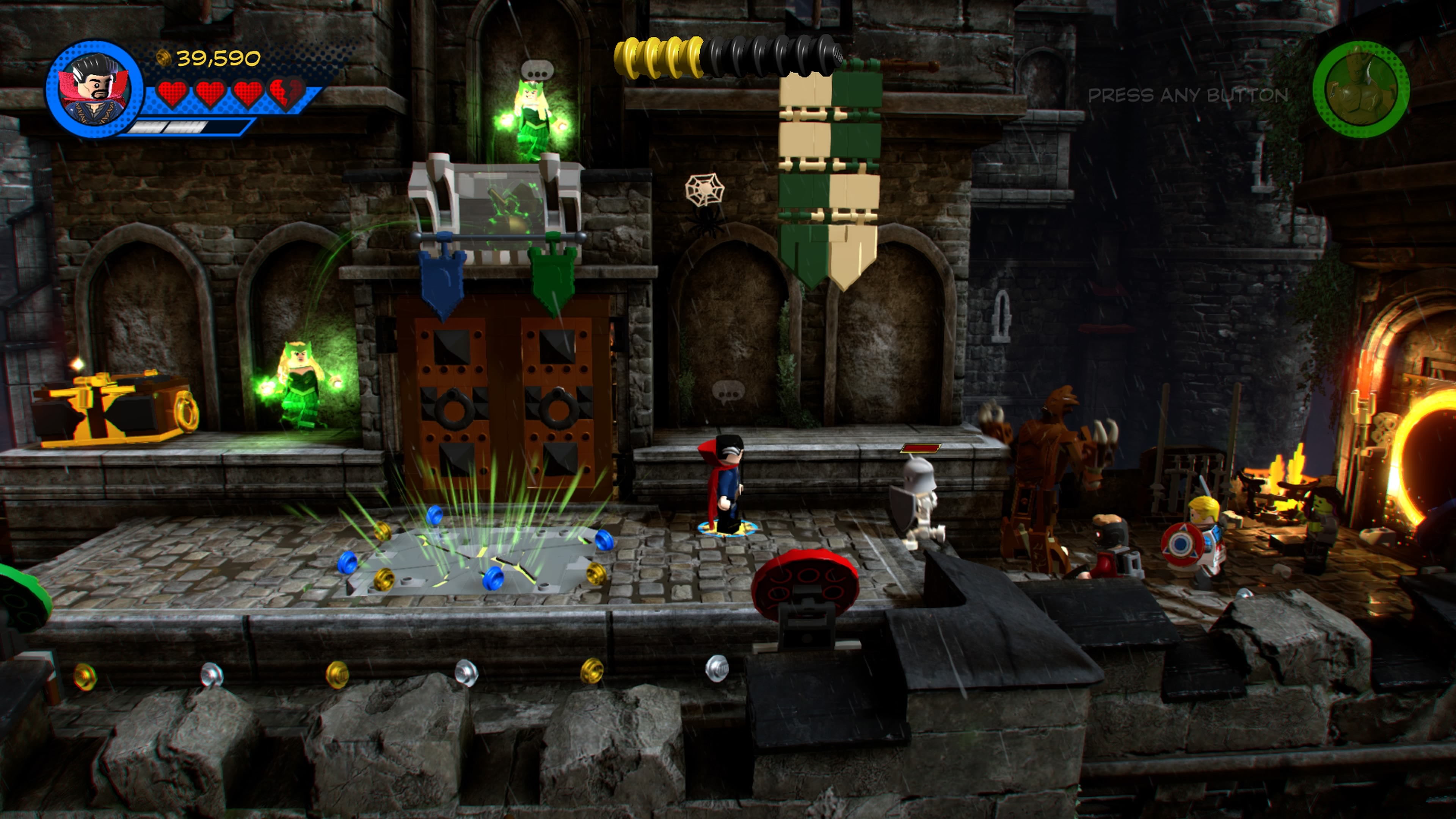 Still, Lego Marvel Super Heroes 2 isn't a game you're supposed to play for its fast-paced melee combat. There's also the open-world nature of the game: multiple universes stretched out for you to hop between with fast travel, travelling to icons to solve puzzles, take side-quests, or even rescue Stan Lee, who shows up in every level asking how he gets stuck in these ridiculous predicaments. This expansive open world and the multitude of things to do might scream value to those of you worried about how many hours you can sink into a single-player game, but while the endless to-do list is going to appeal to hardcore Marvel fans or, better yet, restless children, there's a problem. It's just that - whisper it - these side activities aren't very good. It's like the game lacks the confidence in what it's doing and instead aims to provide unnecessary distractions from a game that you're mostly playing to enjoy the characterisation of Marvel's world rather than trying to pick up mini-kits or put out five fires for some form of reward... that might also be a mini-kit.

Lego Marvel Super Heroes 2 then, is far from a perfect game, but it's the purest and most enjoyable version of Lego's video game formula I've seen yet. The love for the Marvel universe is clear here, and the research the studio has done has paid off. I'll be playing this game for a while, ticking boxes and collection variant characters. Unfortunately, while the window dressing around the game itself is honestly exceptional, the platforming, punching, and puzzles found within the game are creaky now, up to a decade behind the industry standard.

So, credit where it's due, there's a lot here to enjoy. It's just a shame that the gameplay feels like a tired rehash, letting down the excellent work elsewhere.