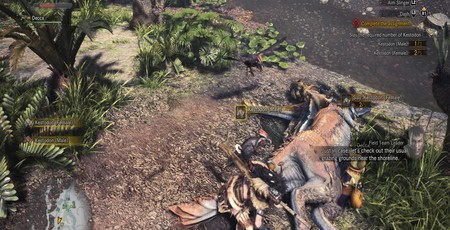 The game's world and the mechanics and systems intertwined in it feel sprawling. This is the first Monster Hunter I've put any serious time into since the franchise's inception with 2004's PS2 title Monster Hunter, and the sheer scale of it is stunning. For rookie hunters or those that have been away for a long time, Monster Hunter: World is dense and unwelcoming. As a JRPG game, it will already be difficult to parse for outsiders to the genre, but the game itself is so complex, and the interlocking systems to actually successfully hunt a monster are so essential, that a lot of people will bounce off the game. Stick with it past the initial bedding in, however, and the game's brilliance unveils itself to you all at once.

Monster Hunter feels like a very on-trend franchise as we grow towards an always-online vision of the games industry where games as a service reigns supreme. Monster Hunter: World feels like a perfect fit, a game where you head out into the wilderness with friends to hunt monsters to carve them up for components that you can use to craft new weapons. The game is a ready-made gear treadmill, and it's compelling to play, with most monsters past the first two or three being stronger and tougher than the player avatar and requiring thought and a solid knowledge of the combat system if you're to come out victorious. This means that every monster you kill feels like an achievement, which adds to the gratification of subsequently using the slain foe's parts to make a better sword or a new piece of armour. It does a good job of keeping you involved, and while technically it might count as a grind I didn't find stalking and taking out monsters for my next piece of gear to be unpleasant or tedious in the slightest.

Again, the game's sense of scale is breathtaking, and it feels like the player is a tiny avatar fighting impossibly oversized dinosaurs, hacking away at their legs with a tiny weapon. Combat is satisfying and well balanced, with sprawling series of combos being delivered via button prompts at the top of the screen, changing with every hit. The game makes me feel like I'm really battering giant monsters, slowly breaking parts of their armour and chopping away at tails and ankles in an effort to simply elicit a response from them. A fully charged hit has a satisfying thunk when it connects, and for those of you that don't fancy getting up close to dance with monsters, there are a variety of ranged options that feel unique in execution: The bow is fun, but the automatic Gatling gun that blows chunks off of your target is satisfying, too. Then there are more creative options that feed into interesting and diverse combat styles, such as the insect glaive that lets you blast insects at people. Bizarre, yes, but enjoyable nonetheless. The multiplayer functionality has been mostly fine so far, although there were a few wobbles around the weekend, as the Monster Hunter servers and the PlayStation Network were down intermittently. I was also dumped out of a quest once with no way to get back in, leaving my friends to collect all the good loot without me. Otherwise, though, I encountered no real issues playing in groups of two, three, and four.

When playing in solo or with a single partner, you'll be joined by a Palico, an adorable cat that will help you by gathering stuff and fighting monsters. The Palico is customisable during the game's extensive character creation menu and, to state it again, incredibly cute. Narratively, the concept of being a big game hunter is a little weird for me. There are distasteful hints of colonialism, and the memory of someone sneering over a dead tiger in a photo makes me feel a little gross, but considering I'm carving these enemies to pieces to make a new set of matching blades, I figure it's fine. The game's story exists, but that's about all I can really remember of it. Basically, some monsters are being a bit more uppity than usual, and it's up to your character, as a monster hunter, to investigate, hunt, and do whatever else over the course of the game's 30+ hours of story.

Let's be honest: It's little more than a framing device for you to go and brawl with monsters. That's not a bad thing in and of itself, but Dickens this is not. The environments are lush and interesting, and while I haven't yet finished the game I've been to several locales that really are stunning. Monster Hunter: World is one of the better looking games on the PlayStation 4 Pro. Every screenshot quickly becomes a stunning vista, but this comes at a price: The frame rate on the PlayStation 4 Pro occasionally hiccups, and while there is an option to flip between prioritising graphics and frame rate for the Pro, I'm concerned about the performance on a base PlayStation 4 - sadly, I don't have one conveniently available to put this intuition to the test.

There's a sense that in the jump to home consoles from handheld devices, Monster Hunter has matured. There's not a big change here, at least based on the handful of hours I put into the portable iterations, but Monster Hunter: World is a confident game that seems to have a lot to say, and it feels like it's ready to hit the mainstream and become a global hit.

Occasional performance issues aside, Monster Hunter: World is an unexpected delight. The core loop of hunting, carving, and crafting is compelling and should appeal to anyone who was left cold by Destiny or who fancies a little more bonkers JRPG with their online multiplayer. Whether you'll enjoy it or not depends on your tolerance for the subject matter, as there's little here except the monster hunting promised by the game's title. Still, there are plenty of reasons to be cheerful here, and if you're not immediately turned off, this is worth a go. Unless you're on PC of course, where unfortunately you're going to have to wait until the end of the year to give it a go for yourself. 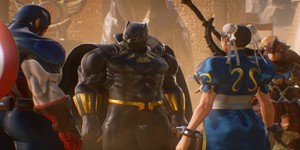