The Need for Speed series has seen more facelifts than a certain auto-tune abusing pop singer; it’s been everything from a hard-line simulator to a grungy underground arcade racer and that's just in the last few years. It’s not surprising then that the latest instalment in the series, Hot Pursuit, is touted as a reboot too and claims to take the Need for Speed franchise back to its arcade racer roots.

It seems to succeed too - there is little that can match the feeling of a perfect 170mph power slide, wheels squealing on the rain slicked highway before jinking straight, just in time to avoid the oncoming people carrier. These kinds of moments are gaming gold; it’s just unfortunate that they exist in a game which does nothing new or interesting in terms of presentation or execution.

This isn’t necessarily a criticism, the arcade style of Hot Pursuit makes it easy to pick up and just play. You won’t find any complicated ride height or camber adjustment options here to alienate non-petrolheads and fans of the Burnout series will be particularly at home, which isn’t a massive surprise given that the same developer, Criterion, is responsible for both games.

Threading your supercar through a police roadblock at 190mph is...challenging
The central premise of Hot Pursuit is the ability to play as either the Police or as a lawless street racer, both of which prowl the idyllic Seacrest County; a place so car-friendly it could have been designed by Clarkson himself. Players progress through the two careers by gaining bounty points, which are won by completing the various races and challenges that are dotted around the Seacrest map.

As your bounty increases and your level rises, more races, challenges and cars become available. It’s a tried and tested progression mechanic but it seems to have been implemented lazily in Hot Pursuit. You earn bounty as both an illicit street racer and law abiding police officer, for example. Now we understand that earning a bounty as a racer makes sense, but we’ve yet to meet any police officers with a price on their head. Earning ‘bounty’ when playing as a cop just makes it seem like the developer was too lazy to change the mechanic for the police career.

In theory this ability to play as a cop or a racer gives the player two diametrically opposed career paths to explore. In practice however there is rarely any difference between the two paths, apart from the cosmetic appearance of the car being driven.

Don’t expect to see one of these on UK roads anytime soon
Challenges on both sides of the law include time trials (creatively titled rapid response missions for the police) and both police and racers have to ram and eventually disable the opposing cars during missions. The only difference is that the objective for the racers is to finish first, whereas the objective for the police is to stop the race completely. This leads to the career mode becoming decidedly repetitive after the first few hours of play.

There are a number of weapons included in the mix to spice things up though, with each side having access to a range of varyingly plausible weapons. Options range from spike traps to EMP cannons and while these are fun initially, they do little to dampen the tedium of working through the cookie-cutter missions.

There also seems to be a slight lack of thought in the design of some of the weapons. Take the police spike trap, for example, which is deployed from the rear of the car. Excellent you think, I’ll drop this in front of my foe and he’ll be out for the count – not so. In fact all the spike trap does is take a couple of blocks off the racer’s health bar and immobilizes him for a period. This leads to the bizzare situation whereby, as the police officer, you actually have to stop and wait for the effects of the trap to wear off the racer, so he can then catch up so you can then race and ram him until he is ‘detained’.

The cars are all fully licensed and you can pick from a predictably heady range of Lambos, Aston Martins, Zondas and Maseratis, all of which are accurately modelled. Disappointingly though most of the cars handle very similarly and you can effortlessly power slide any vehicle with a dab of brake and a heavy right foot. This may fit in with the arcade styling of the game, but it makes getting a new car something of an anti climax 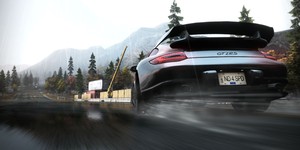 Rivals is a perfect game for speedy thrills, but it won't hold your attention for long.

The Need for Speed series is changing, but for the better or worse? We find out.