'The future just keeps getting future-ier', said Lo Wang in one of the opening few levels of Shadow Warrior 2. He's not wrong, as Shadow Warrior's bigger, braver and Borderlands-ier (and less grammar-ier - ed.) sequel bears the mark of many recent gaming trends, and shows that the future isn't necessarily a bad thing.

Shadow Warrior 2 is still an exciting, fast-paced shooter. It's just that now it has RPG elements bolted to it; hub areas where you go to pick up quests, a horde of weapons and a variety of modifications to drive up your DPS — that's damage-per-second. Then there's the four-player co-op and the procedurally generated maps that mean every playthrough is unique.

Told you it was cribbing ideas from recent games, didn't I? The most crucial aspect for fans of the original Shadow Warrior, and fans of the genre really, is whether or not it feels and plays the same as the 2013 remake that came before it and the many other frenetic arcade shooters that inspired it. The answer is, while it's nearly there, it's lost a few things as its ambition has spread outwards. It's still a lot of fun, but as it's repositioned itself towards a co-op RPG title instead of a slickly paced corridor shooter, it's lost a little bit of what made the original so great.

But Shadow Warrior (2013) still exists. You can go back and play that, and you'll have a good time. It's not going anywhere. Shadow Warrior 2 is bold and while it doesn't set the world on fire with new ideas, I enjoyed my time with it. My primary complaint within a few hours of play is that the procedurally generated maps completely kill the pacing. The maps are threaded together from hand-crafted plots of land so it isn't completely random, but it's still easy to get lost until you learn how to navigate the pieces. Often it means that after a big fight you won't run into anyone else for a little while, and while the game has a sprint and ninja-dash function, covering ground isn't the game's strong point.

I also found myself quickly in a love-hate relationship with the weapon customisation. You'll find a lot of weapons in the game: chainsaws, katanas, grenade launchers, assault rifles, revolvers and even a nailgun are all littered around for you to find, and each can have three different objects slotted into them - this might be the ability to two-fist machine pistols, or a gem to make your katana electrocute enemies or even just something to let you have more ammunition in the magazine. They're good ideas, but I found that in practice you pick up so many of these gems, and different iterations of the same gem can change numbers by such small fractions that I was frequently tinkering with my guns and, more often than not, it felt like busywork. Similar to this were the skills. I knew that I needed to improve my skills to keep up with the rising difficulty level, but there were so many choices and they all felt so niche or simply changed numbers that I wasn't really engaged with so that largely I just ignored them, pouring all my points into healing powers and making my fire weapons really, really hurt.

These are my biggest complaints with the game: Shadow Warrior 2 is at its weakest when it's asking you to cover ground or fiddle with your inventory; the game's flaws are most apparent when you're not fighting for your life. 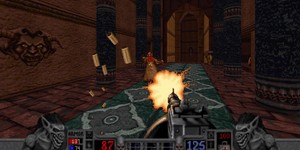