The puzzling is also considerably less likely to trigger a migraine. The puzzle rooms generally allow you to see everything you need at a glance. If you still struggle to spot objects of importance, Lara can highlight them through her binoculars. The object of the puzzles is to encourage exploration and interacting with the environment, but without aggressively impeding the adventure itself. Not every aspect of the game has aged well. The combat goes too far in its efforts to simplify. Enemies either run around spraying bullets in your general vicinity, or charge mindlessly at you if they happen to be of the animal variety. At the same time, the game’s auto-targeting system means you don’t even need to bother aiming. It isn’t merely unchallenging, it’s uninteresting. The only time you need to think at all is when an enemy with a riot shield turns up, requiring you to dispatch them with grenades rather than guns.

Ultimately, though, what makes Legend so enjoyable has little to do with the modernised systems. Instead, the fun stems from game’s tone. Legend doesn’t just provide us with an interactive adventure serial, it embraces the spirit of Tintin and Raiders of the Lost Ark as well. For the first time, Lara is aided in her adventures by a couple of helpful sidekicks, namely the historian Alister and technical expert Zip. Together they joke and banter over the radio, bringing a sense of camaraderie to the proceedings, and resulting in a much lighter, less isolated atmosphere than the games which came before and after. Lara herself is cheerful, delightfully witty and brimming with self-confidence. It’s strange. The 2013 reboot spent an entire game building Lara into this strong and able character, and put her through all kinds of grisly horror to do so. In Legend, Crystal Dynamics achieves this in a single, introductory cutscene in which Lara effortlessly scales a towering cliff-face.

I hope Crystal Dynamics brings back a little more of this Lara for the next Tomb Raider, news of which recently leaked onto the Internet. The 2013 reboot was an interesting experiment and a decent action game, but Rise of The Tomb Raider didn’t work anything like as successfully. The ridiculousness of both its plot and action fitted poorly with the severe tone, and it struggled to keep Lara’s character consistent. I understand the desire on the team’s part to present us with a more human Lara, but when the premise of your game is so fanciful to start with, it requires a larger-than-life character to carry it along. Otherwise you end up with a game that is joyless. Legend, by comparison, strikes that balance almost perfectly, providing us with a lead character who is charismatic, capable and, most importantly, fun to spend time with. It doesn’t quite dispense with all of the 'laddish' elements of her character – the shorts are still skimpy and Lara isn’t above the odd suggestive pose - but it also doesn’t force her to crawl through a river of blood and death to prove her ability. She’s ready for the adventure from the off, and that lets both her and the player get on with the business of enjoying it. 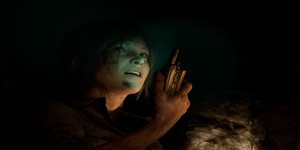