When Ubisoft first showed The Division to the public back in 2012, the game depicted was a tactical shooting nirvana. Players would gather together with friends and attempt to survive the streets of New York in the aftermath of an apocalyptic event. They'd roam around the city scavenging for weapons and supplies, while squaring off against other groups of players in a thrilling, dynamic game of Finders Keepers, Losers Get Shot to Bits With High Calibre Rifle Fire. It was, essentially, big-budget DayZ, and it looked brilliant. The Division that I've been playing over the last week is not that game. Instead, it is a squishing together of a standard third-person cover shooter with cooperative bits, and a traditional MMO framework with dynamic action bits. In theory this is no less interesting; large-scale first person shooters have only been explored a handful of times, such as in Planetside and most recently Destiny. Yet in practice the release version of The Division is a lot less interesting, a bizarre hodgepodge of derivative systems which, although enjoyable in the right circumstances, all too frequently descends into numbing tedium.

Here's the pitch - New York has been attacked. Again. This time the aggressors are a group of terrorists who, by feeding infected banknotes into circulation on Black Friday, have unleashed a deadly viral strain into the city. The resulting outbreak causes the entirety of Manhattan to be cordoned off, and the situation quickly descends into a mess of protests, rioting, looting, and general anarchy. You play a member of the titular Division, a secretive organisation of special operatives who are tasked with bringing order to the streets of New York. This they do by shooting on-sight anyone deemed to by causing trouble, which during the course of play easily amounts up to several thousand people. Before we go into the nuts and bolts of the game, I just want to take a moment to say that good grief the politics of The Division are repugnant. For the first few hours, the individuals you're slaughtering by the hundred aren't organised terrorists or a rebel army, they're random people who live in New York. Sure, they may have turned to looting and thuggery in the wake of the disaster, but there's something about a steely-eyed, heavily armed military man blasting away folk wearing hoodies and wielding pistols and baseball bats that is deeply unsettling, especially given the current situation in the US when it comes to use of deadly force by the police.

Aside from its questionable ethics, The Division's storytelling amounts to a large amount of forgettable dialogue being wittered in your ears while you run around the city pacifying regional unrest with your guns. The structure will be familiar to anyone who has played a Ubisoft game in the last ten years. The map is scattered with hundreds of icons which amount to roughly a half-dozen activities repeated over and over, ranging from procedural 'Encounters' that net small rewards, to more structured side-missions that offer moderate rewards, and the main missions that offer large rewards. The former two are fairly standard open world affairs - defending objectives, breadcrumb-trail "investigations", and so forth that can largely be completed solo. The story missions, however, are lengthier and far tougher scenarios that require a team of agents to tackle them. It's in these missions where The Division's main draw comes into play - cooperative, tactical combat. 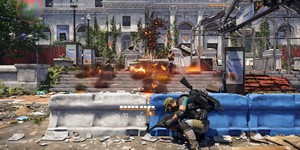