Once you've played for a few hours, it becomes possible to switch between the three main characters at any time (provided you're not on a mission). Doing so will cause the camera will zoom out from the character you're currently playing, and locate the character you've selected, who you take control of regardless of what they were doing at the time, be that walking their dog, sitting outside a coffee shop, or staggering drunk and naked on an inner-city bridge. It's mostly an excuse for Rockstar to show off how much detail they've crammed into this game, but boy does it work, heightening the sense of the world being alive and busy beyond your current perspective. While they spend plenty of time apart, the three characters don't live separate lives. They frequently come together to enact what are undoubtedly the best missions in the game. Heists are massive, complex, multilayered endeavours, and involve extensive planning, collecting appropriate equipment, and performing the heist itself. The planning stage gives you a few options in terms of method, usually between an intelligent, relatively quiet approach or a forceful, loud, and bloody assault. You also choose any additional crew you need, usually between cheap, fairly unskilled robbers, or expensive talented ones. After that there are several sub-missions in which you collect equipment, vehicles, weapons, and specific gadgets before embarking upon the heist itself. Whichever options you pick, the results are always spectacular, thrilling and conceptually very creative, and always require you to play from all three available character perspectives at some point. It's also very refreshing for GTA to give you some options in how to play a mission, although the actual heist event is fairly strictly structured whichever path you choose.

In fact, this is the case for most of GTA's missions, and it's here we run into the first real problem for GTA V. It's one that has been fairly consistent across all of Rockstar's open-world games, and it's that Rockstar simply don't encourage emergent play within their mission structures. When outside a mission you can do as you please, but when inside a mission it's go here, do exactly this, exactly that. Here's an example, in organising one heist, the game requires you to steal two vehicles, a tow truck and a rubbish truck. Instead of having several vehicles patrolling the streets which you can choose to steal, however, the game then directs you to one tow truck, parked at a mechanics somewhere, and one garbage truck, on its evening collection route. It's that typical Rockstar problem of their desire to give you an open world locking horns with their desire to also create a scripted, storied experience. This is also evident in that missions can be extremely strict in terms of their tolerance for failure. There was one "mission" where Michael failed the objective because he fell over too many times doing Yoga. Even the heists instruct you to switch to specific characters at specific moments, rather than letting you pick the perspective from which you want to play. The only time Rockstar North really let their systems loose during missions is when you're being chased by police. Then it lets you go where you want, fight how you like, create whatever chaos you desire. 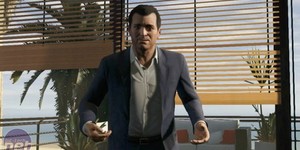 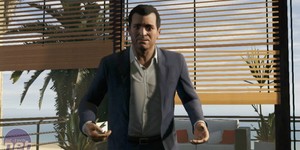