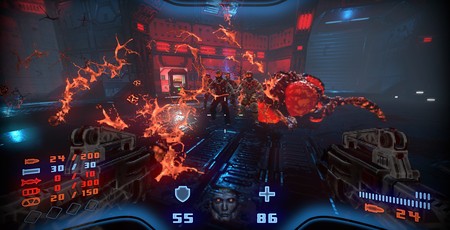 Release: Out Now (Early Access Alpha)
I’ve had my eye on Prodeus since it was but a pixel in the developer’s eye. Let’s face it, if you’re making a shooter that harks back to the classic FPS games of the nineties, Rick ‘gibs ‘n’ gibberish’ Lane is going to notice. But Prodeus stands out thanks to its stunning hybrid visuals, blending sprites and basic 3D geometry with advanced lighting effects and pixel shaders. 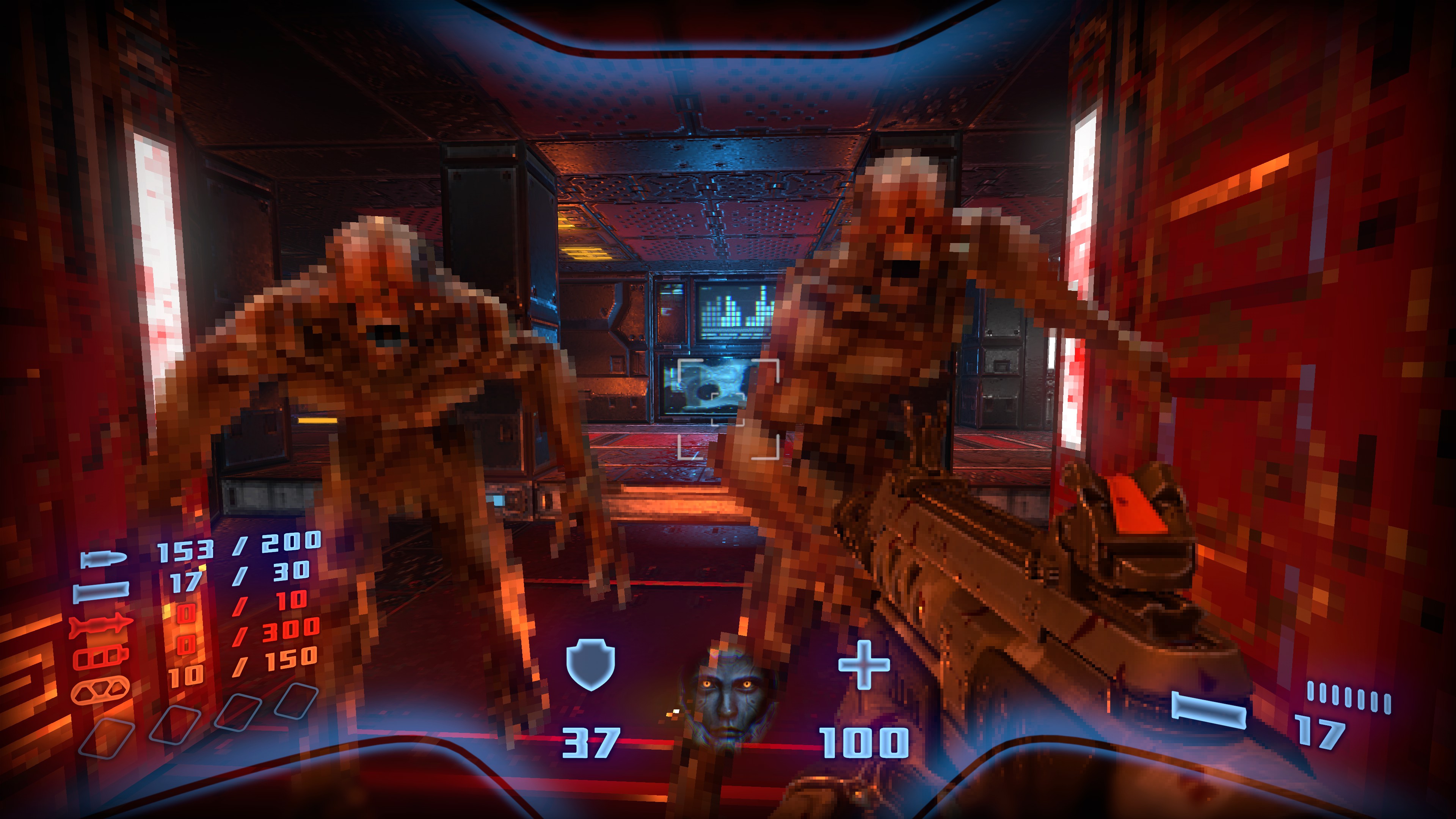 Since the game launched last month (in surprisingly complete Early Access form) I’ve been searching for a chance to get my blood-flecked mitts on it, and finally I have. As I expected, it looks and feels amazing. But how does it hold up against the other retro-shooters that have recently launched, such as DUSK, Amid Evil, and Ion Fury? The answer to that is a little more complicated, as I’ll explain below.
The simplest way to understand Prodeus is to imagine Doom 3 if games had never quite managed true 3D rendering. Prodeus puts you in the role of a typical space-marine type, dispatched through a portal to battle an army of monsters in a dilapidated sci-fi environment. Starting off with nought but your trusty fists, you need to gather increasingly powerful weapons to defeat ever-growing hordes of enemies. 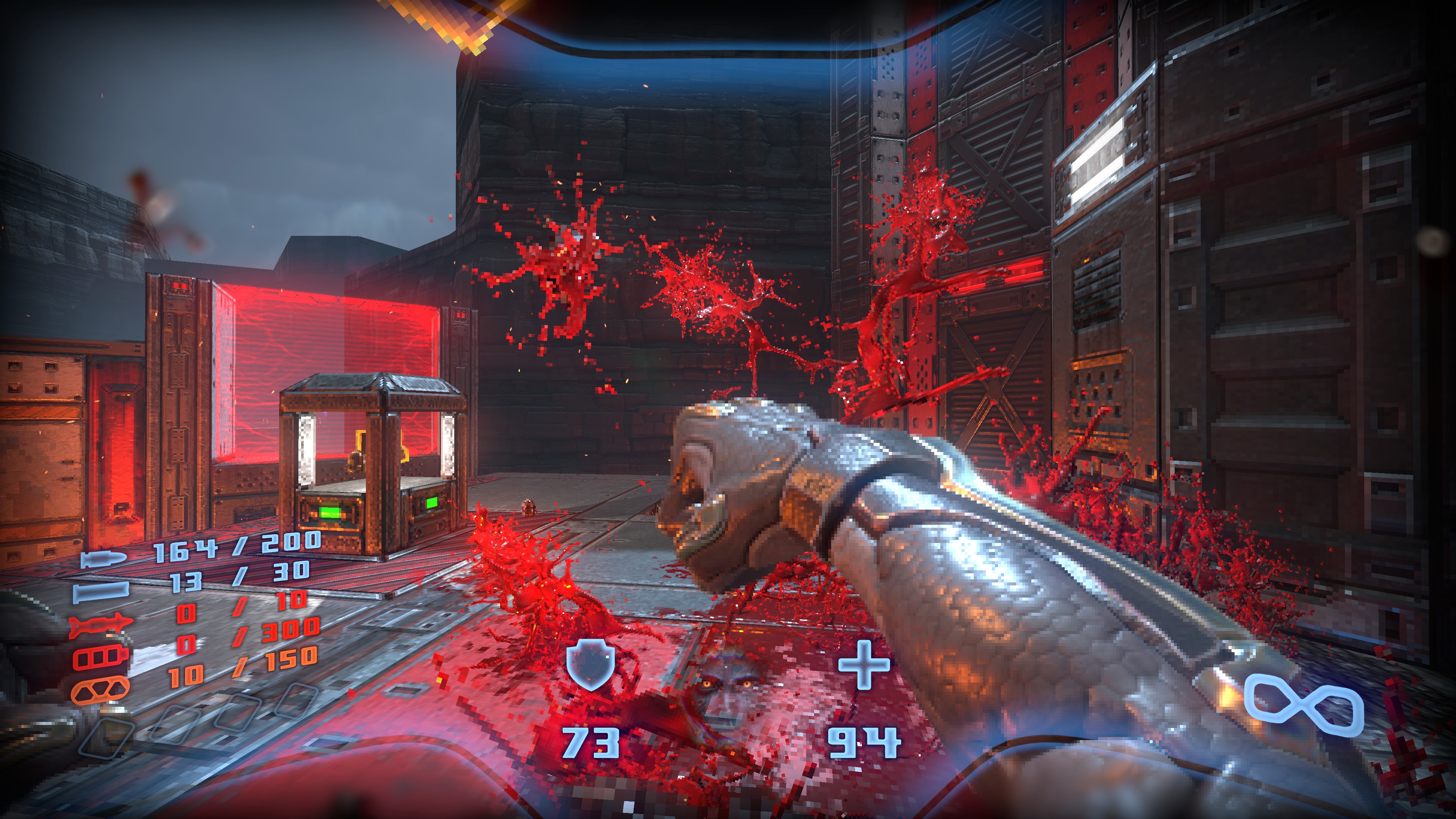 Obviously, what immediately stands out about Prodeus is its aesthetic. It’s a 2.5D shooter just like the original Doom, with 3D levels but 2D enemies. Yet it combines this with modern graphical techniques – dynamic lighting, pixel-shaders, parallax mapping etc. The result is an FPS that looks unlike anything else I’ve played. For the most part, my brain accepts it as an old-school shooter, but then you’ll shoot a barrel or fire a rocket, and the resulting explosion will cause light to flood across the screen. What’s particularly impressive is how the lighting interacts with the 2D sprites. It glints off the chrome surface of your pixel-y gun, while your fists glisten with the blood of your enemies after punching their faces inside out.
That’s the other thing you’ll immediately notice about Prodeus. It is stupendously, ludicrously violent. Shooting an enemy will usher forth great torrents of gore, like the elevator scene from the Shining. It is literally possible to paint the levels red with enemy blood, viscera splatting and squelching across the walls in a way that is both disgusting and gratifying. At times it’s almost too much, with the giant splashes of blood obscuring your vision and making it difficult to spot enemies. 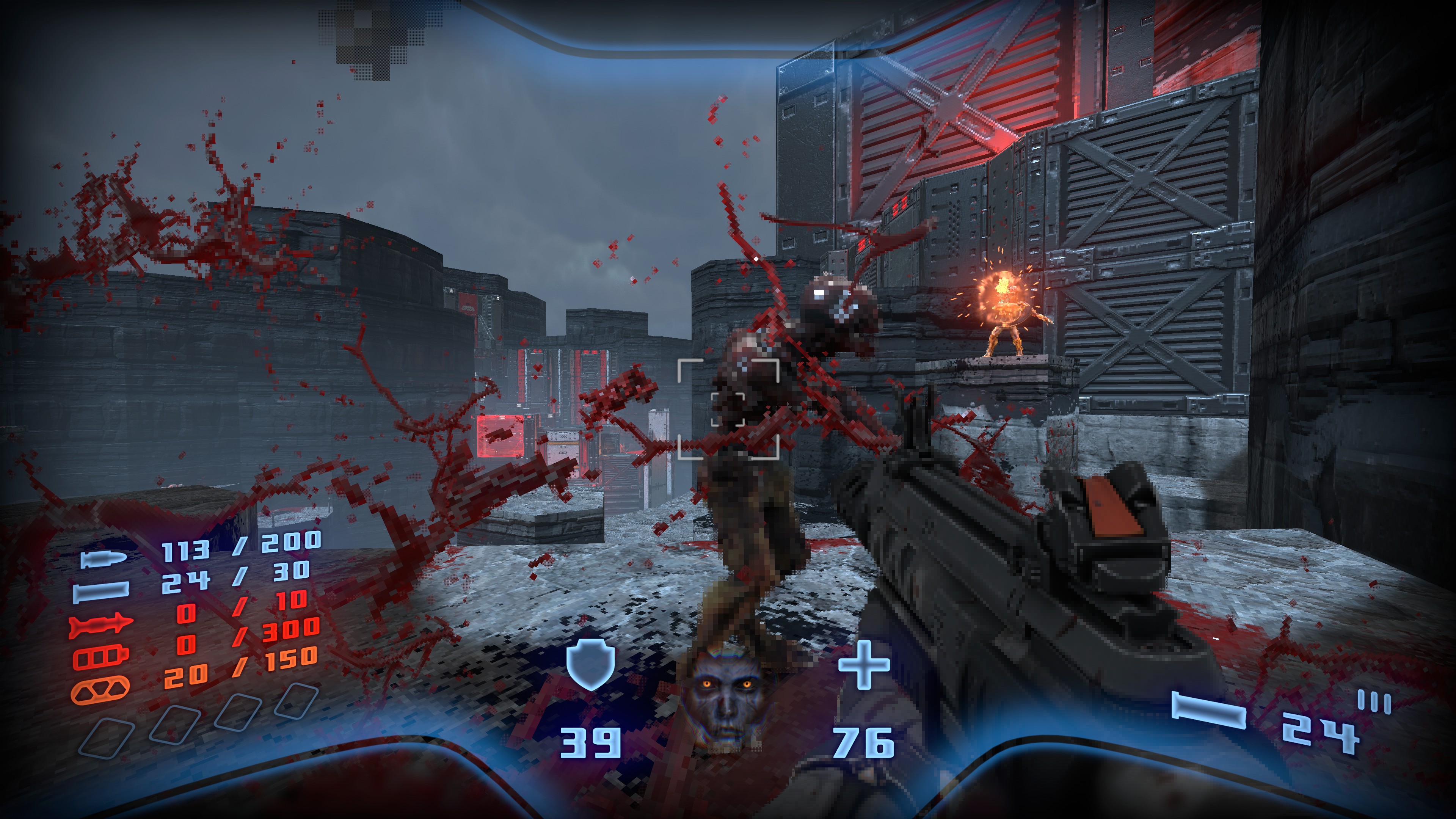 In play, Prodeus doesn’t mess about getting to the good stuff. You’ll have picked up three different weapons and battled at least four enemy types by the end of the first proper level. The core shooting is rock-solid. The first gun you pick up is a silenced pistol, which I was initially ambivalent about, but actually has a real kick to it despite the somewhat superfluous suppressor. The shotgun is decent too, though not up there with your Dooms or your Half-Lifes. The chaingun, on the other hand, is devilishly good, making fine use of Prodeus’ extravagant gore system as it carves enemies into mince.
Prodeus is an Early Access game, but it already feels remarkably complete. It offers five intense hours of singleplayer fun, with plenty of levels delivered via an overhead map that branches off in different directions. As for the levels themselves, some of them are brilliantly designed. An early stage beautifully plays with the “Keys” concept of Doom, dangling a Red Key you need to obtain in front of you before whisking it to another part of the level whenever you approach. The Descent, meanwhile, is a masterclass in tension-generation, gradually upping the ante to a stupendous final battle near the end. 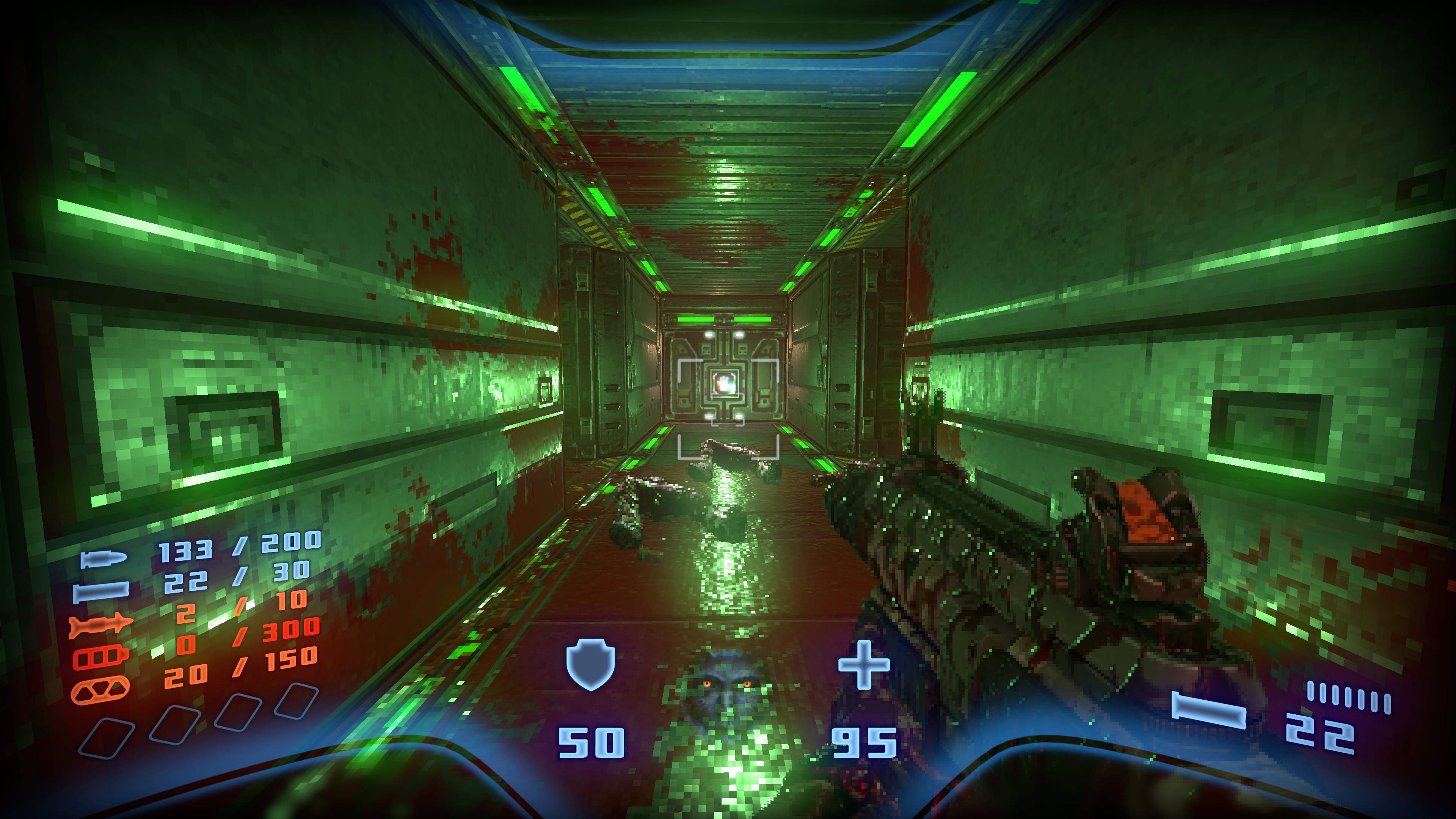 All told, Prodeus has the potential to be one of the best retro-FPS’ around. However, there are currently some problems that need fixing. Primarily, Prodeus leans far too heavily on Doom as its base for inspiration. This is most notable in the enemies, which are all basically reskins of Doom’s demonic menagerie. There are shotgun grunts, fire-flinging imps, even facsimiles of the pinky demon and the cacodemon. It doesn’t help is that they’re less interesting versions of those monsters, all rendered in a rather soulless grey and brown art-style that makes some of them hard to distinguish.
Indeed, while I think the level design is great. I’m not sold on the general art style. I love the suffusion of old and new tech, but I’m less swayed by the parade of dingy brown and orange that makes up the majority of Prodeus’ colour-palette. 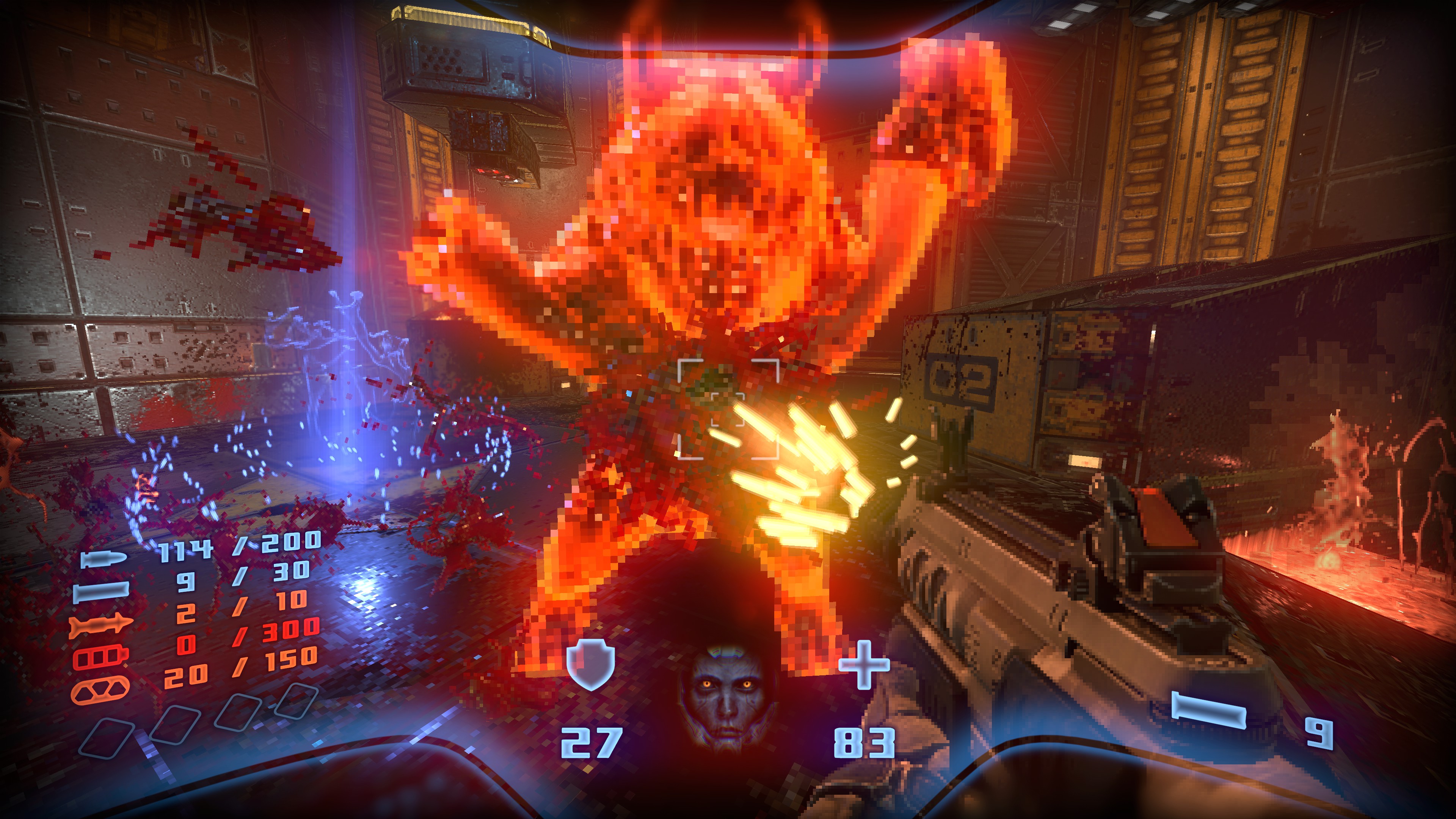 Another concern revolves around the weapons. Prodeus’ weapon roster is impressive, boasting eighteen weapon slots. As for how many of those will actually be useful in a general sense, that’s less clear. Early on, you pick up twin assault rifles, which serve as your constant stream of damage. A couple of levels later, however, you acquire the chaingun, which is far more efficient than the dual rifles while using the same ammo type.
I’ve little doubt that Prodeus will be a good shooter. Thrilling, spectacular and fun. The question is whether it can elevate itself above the game that inspired it, offering something new beyond a neat aesthetic, in the way that DUSK and Amid Evil both did. We'll find out sometime next year. 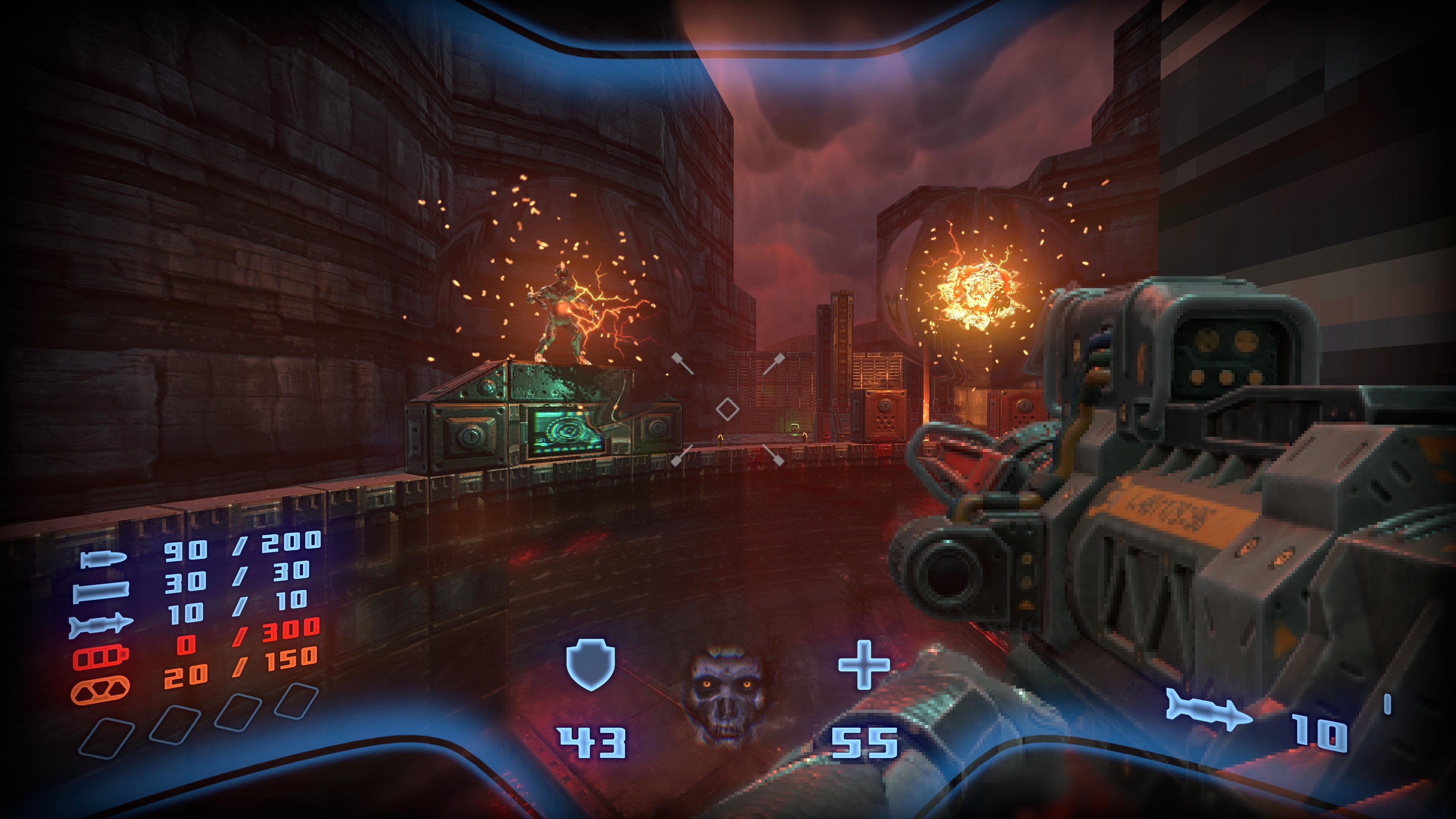