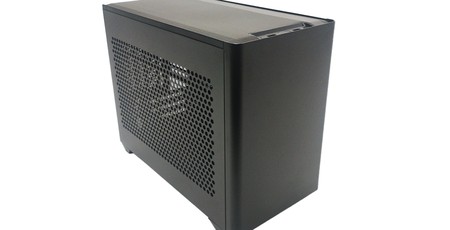 There's good to be found with the way in which the chassis secures the panels. Cooler Master uses a pin-based system similar to the Lian Li TU150 case we reviewed previously. The company also fixes a common complaint with respect to just how easy the panels are to engage and disengage; Cooler Master has the pressure just right. 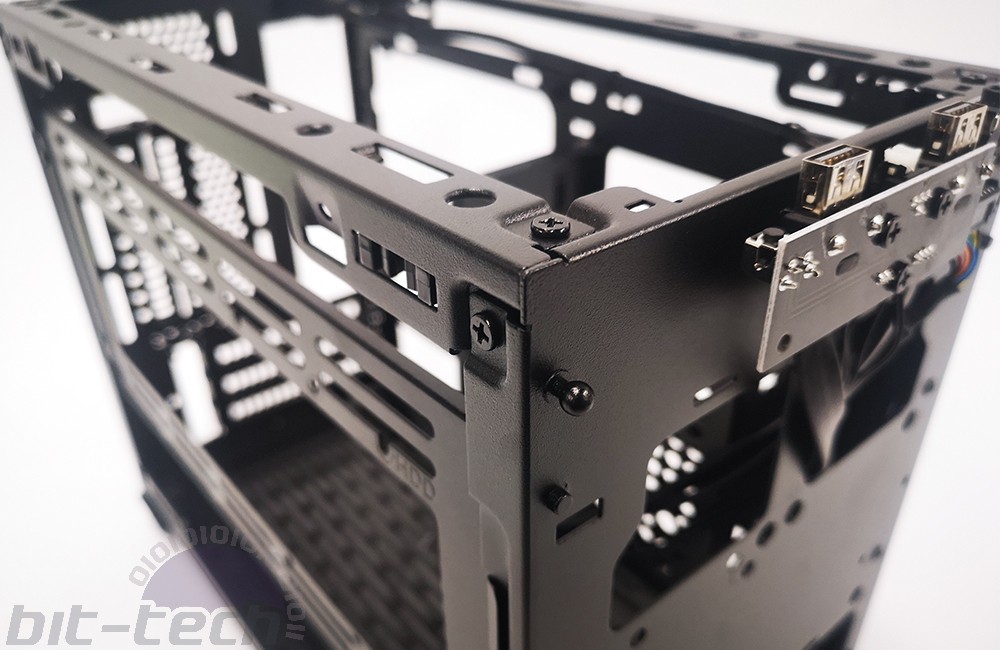 Above I've managed to photograph both parts of the securing system. You have the male part of the front of the case and the female part on the side panel, to the left of the top-right screw. The top panel uses the standard plastic pop-in method that most cases have used for front panels for the last decade. 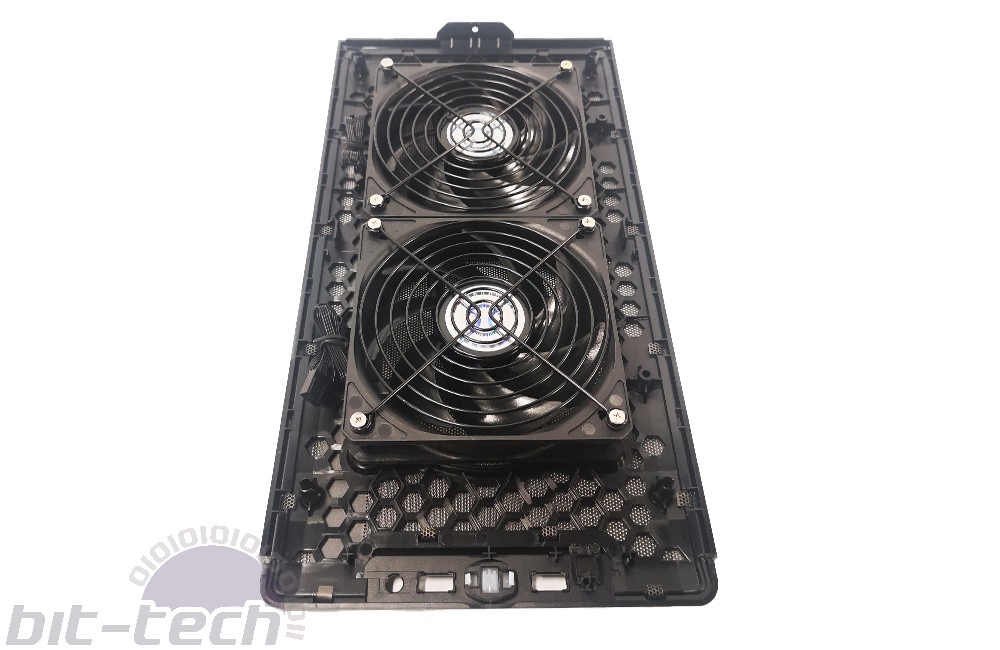 Staying on the outside but technically inside of the case, we have mounting points for two 2.5in drives. These use a nice tool-less mounting system which uses screw in metal pegs that go into the SSD and rubber grommets that go into holes in the case. The holes are positioned so that the connectors on the SSD are in line with the larger cut-out at the bottom of the panel. There’s also mounting holes for pumps and reservoirs. While watercooling in the case would prove to be a challenge, there have been some creative attempts online with some modders on our own forums managing to fit three radiators within the tight confines. The side panel also has an optional plate that can be installed to allow for one 3.5in drive to be installed on that and another on the PSU mount. Enough storage options, then. 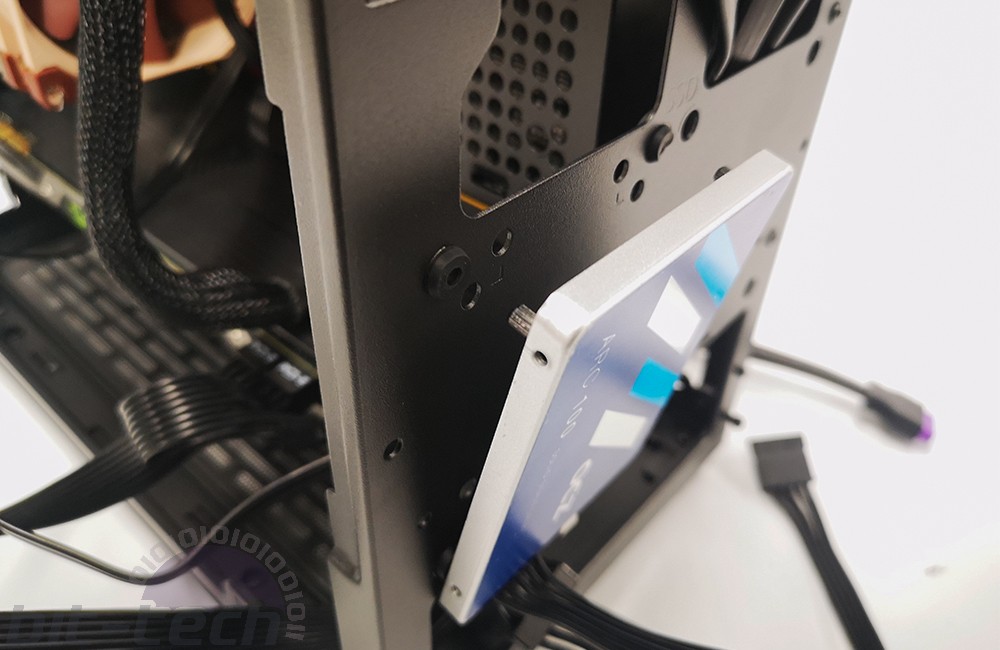 The PSU is screwed into a cage that is then hooked and screwed into the motherboard tray towards the front top of the case. The Cooler Master manual shows the PSU being installed with the fan towards the closest panel to the PSU but this doesn’t seem to be needed and I suspect the thermal difference would be minimal. The only requirement is that the power socket is facing upwards so the extension coming from the rear of the case can plug in. The extension is very high quality and I didn’t have any issues bending it into place. Having a PSU with the kettle lead port towards the middle of the case will make for an easier cable run, but it’s not essential. 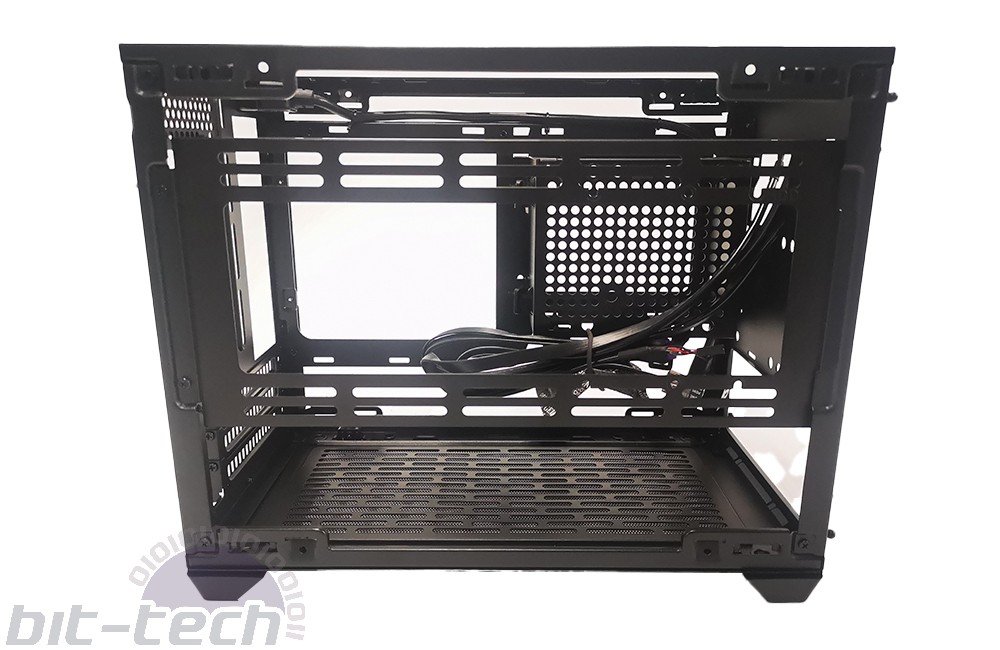 The two included 120mm SickleFlow come pre-installed with a semi tool-less system which I don’t believe we’ve seen on any fan before. You screw a grille onto one side of the fan and the bolts protrude out of the other side with a slight bulge. These can then be press-fit into the rubber grommets installed into the top panel of the case. This allows the fans to be easily removed for maintenance purposes. I’ve also tested the system by installing the mesh onto some Corsair LL120 fans and they worked a treat to add a little bit of RGB to the build. 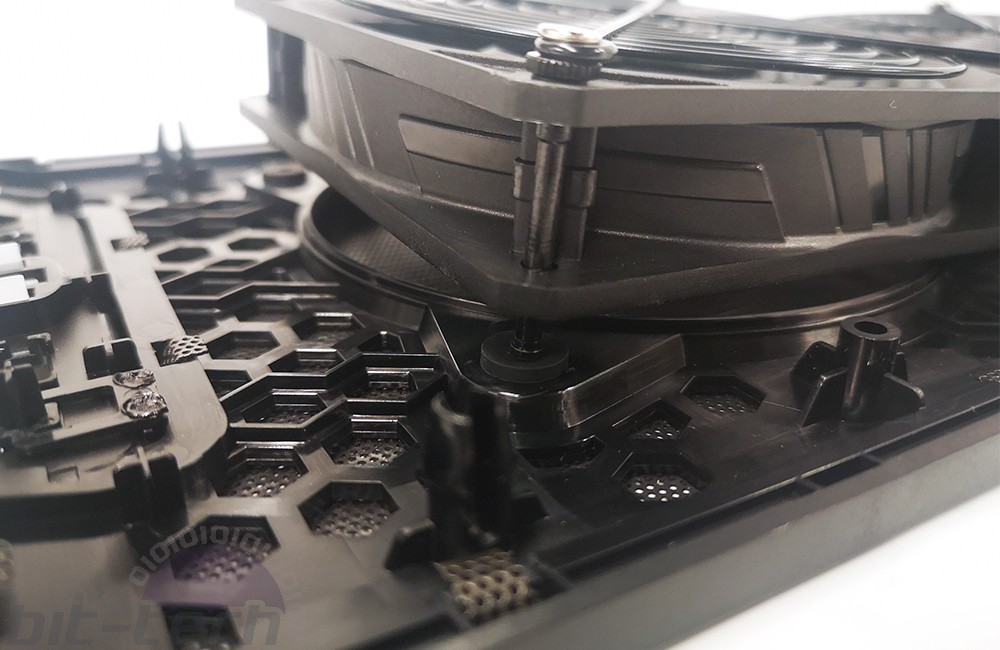 The bottom filter on the case is magnetic so can be easily removed and the whole bottom panel can also be removed using a screw mount on the rear. The feet of the case, of which Cooler Master provide 3D files for, can then be removed with one screw each. 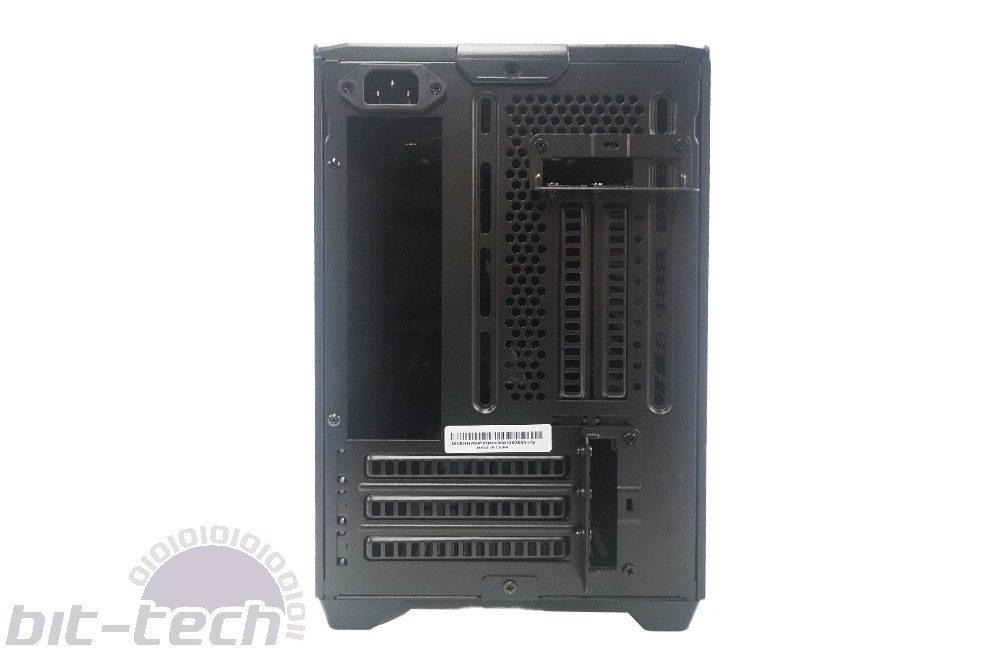 Finally moving round to the rear, there are brackets for the “normal” GPU and the upright GPU mounting spots. There's also the kettle-lead plug I talked about previously and room for officially one 92mm fan, although I suspect you could possibly fit another in there. Towards the top of the side panels, you can see the section you put your finger into to pull the side panels off the chassis.