To test the Corsair Hydro Series HG10 A1, we used an XFX R9 290 Core Edition, which runs at stock speed.

To get an idea of stock performance, we run the card as it is through Unigine Valley at default settings at 1,920 x 1,200 for a 15 minute loop; easily enough time for temperatures to plateau. We then attach the HG10 mounting bracket, fitting it with an NZXT Kraken X40 (note that in the installation photos we've used a Corsair H80i cooler). This cooler uses a slimline 140mm radiator and a single 140mm fan. More powerful coolers are of course available, but this should give us a rough idea of the average performance you can expect. We run the Kraken X40's fan and pump at full speed for the duration of test. Finally, we have compared the Corsair HG10's performance to that of NZXT's Kraken G10 using the same Kraken X40. Click to enlarge
GPU core and VRM temperatures are recorded using the free GPU-Z utility. The temperature presented is the delta T – the difference between the measured temperature and the ambient temperature at the time of testing. We are unable to measure memory temperatures, as this is not something GPU-Z reports and the backplate of the HG10 prevents us from effectively using a laser thermometer. 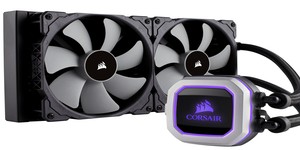