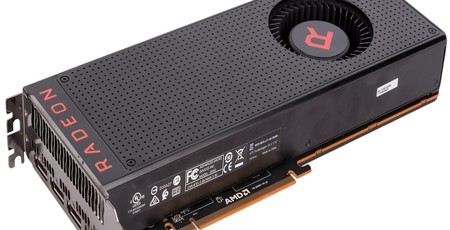 The high-end GPU market has been one-sided for far too long, but AMD is today finally ready to re-enter the arena. With the Vega 10 GPU and the two consumer cards AMD has built around it – RX Vega 64 and RX Vega 56 – the chipmaker is bringing the fight to the GTX 1080 and GTX 1070 respectively. Nvidia’s GP102 GPU, as seen in the GTX 1080 Ti and Titan Xp, will continue to remain unchallenged at the very top of the consumer GPU market, but it’s undeniably nice to have something red-flavoured above £300 (RX 580 and GTX 1060 in card terms). So, let’s see just what that something is and, more importantly, how well it performs.

Looking at the specs table below, you’d be forgiven for thinking that not a great deal has changed between AMD’s last high-end part, the R9 Fury X (launched over two years ago) and the RX Vega 64. However, as AMD is keen to point out, Vega represents the biggest architectural change for the company since five years ago, which is when it first began using the Graphics Core Next architecture in the first place with the Radeon HD 7000 series.

While the Radeon RX Vega 64 does indeed share the same number of cores as the R9 Fury X, it's built on a newer 14nm FinFET LPP process, has considerably higher clock speeds, double the frame buffer, and second-generation high-bandwidth memory. It also takes advantage of AMD's Infinity Fabric interconnect, and individual components in the pipeline have also been tweaked and optimised, as has the physical ASIC itself. The key architectural changes are detailed further over the next two pages.

In terms of differences between the two cards launching today, the obvious one is a drop from 64 Next-Generation Compute Units (NCUs) in the fully enabled RX Vega 64 to 56 in the lower-end part, a reduction of 12.5 percent. The RX Vega 56 also sees its clock speeds, power limit, and memory speed/bandwidth reduced a little too.

We've already covered AMD's launch strategy for RX Vega 64 and RX Vega 56. In short, these two standalone parts at $499 and $399 are joined by a series of bundles that net you two free games, $200 off the price of a premium FreeSync monitor, and $100 off the cost of selected Ryzen CPU and motherboard combinations. These bundles are also the only means of obtaining the Limited Edition and Liquid Cooled versions of the Radeon RX Vega 64 ($599 and $699 respectively). We do not know if AMD is sampling the Limited Edition card, and the Liquid Cooled one is not launching today but at a later date still to be confirmed. AMD has also confirmed that Vega will be appearing in Nano form, but again the release date is unknown.

Regardless, today the focus is on the two standalone cards at $499 and $399 (excluding taxes). Based on conversations with retailers, we are estimating UK pricing including VAT to be £499 and £399, but this hasn't been officially confirmed at the time of writing.

The launch is a hard one with availability expected immediately. However, you will need to wait until September before third-party designs go on sale, according to AMD. Until then, it is only the reference designs you see in this review that are available.