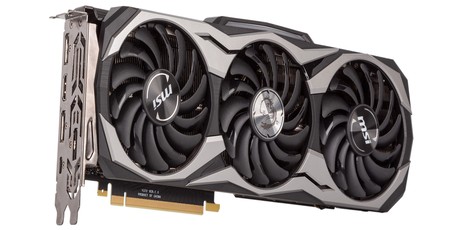 While many have questioned the utility of the RTX 2080 at current pricing in the face of relatively low prices for the similar performing GTX 1080 Ti as well as a very limited selection of games that can actually utilise the Tensor and RT cores, MSI is clearly a believer, having as it does a whopping nine RTX 2080 SKUs to its name at the time of writing. As usual, these vary by the cooling solution and/or overclock applied. When it comes to the Duke, we have a large, triple-fan cooler and, on our OC version, a factory overclock, but it seems the Gaming-branded cards are on hold until MSI completes its custom PCB designs. 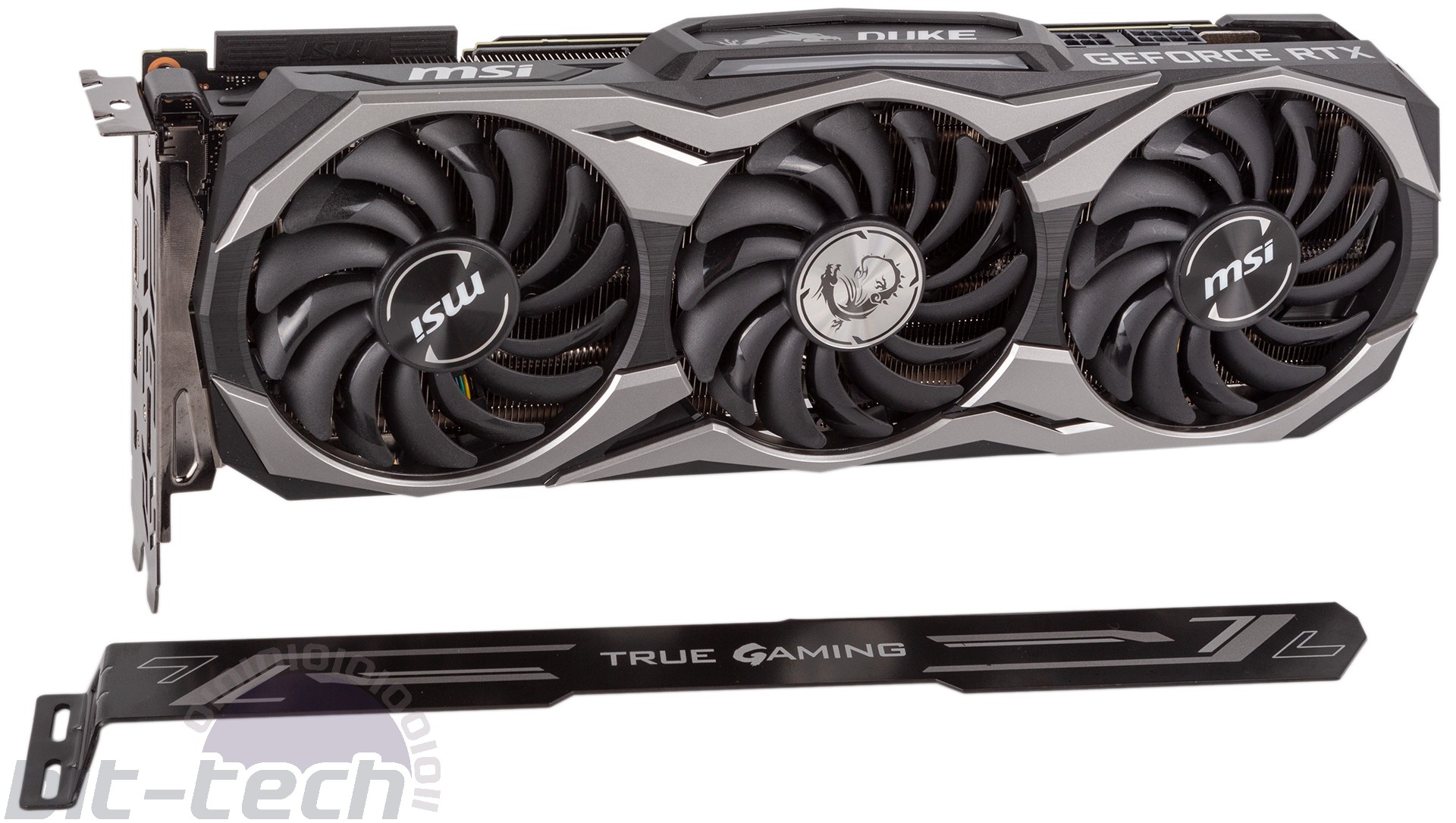 You can see a dashing/rapidly ageing man introduce the card in the video above (as well as its RTX 2080 Ti cousin), but suffice it to say that long card is long. 314mm long to be precise, which may conflict with some smaller cases that have front-mounted HDD cages or water-cooling hardware. The RTX 2080 Duke does also exceed two-slot dimensions, but not too excessively, so there would still be a suitable gap between it and any card in the next available slot. The card is also not as tall as other RTX partner cards we’ve seen, with MSI having chosen length as the main dimension to exploit for its bulky cooler. Said bulk brings the card to nearly 1.1kg, so we were happy to see that a metal anti-sag bracket is included to support it.

As this is the Duke OC, it ships with an overclock pre-applied to the core, although the GDDR6 memory is left at the stock speed of 14Gbps. The boost clock here is 1,845MHz, which is 15MHz below the Palit card we recently looked at, but 45MHz more than the Founders Edition and 135MHz more than the reference speed. The overclock sees the TDP go up 20W compared to the FE as well, landing at 245W.

The cooler shroud is sadly made of plastic and not metal, but it is at least solid with no squishy or loose bits. The metal backplate adds extra rigidity and a bit of aesthetic flair with the dragon, although it doesn’t get RGB illumination; only the small central ‘Duke’ section along the top edge gets this. As you’d expect, the lighting is controlled and synchronised via MSI Mystic Light. RGB has always seemed silly without a neutral colour scheme elsewhere, so it’s good to see a contrasting black/silver design on the shroud that will avoid colour clash. We also like that plastic has been used to cover the overhanging cooler, as it’s more consistent with the backplate.

Sadly, there’s not a proper NVLink connector cover to match the backplate like there is on the Founders Edition card, but we suppose you could leave on the black protective cover (like we did in the photos) if you’re not using SLI and find the gold pins to be an eyesore.

The reference outputs are retained in MSI’s design. As we’ve said before, there’s little reason to deviate here. 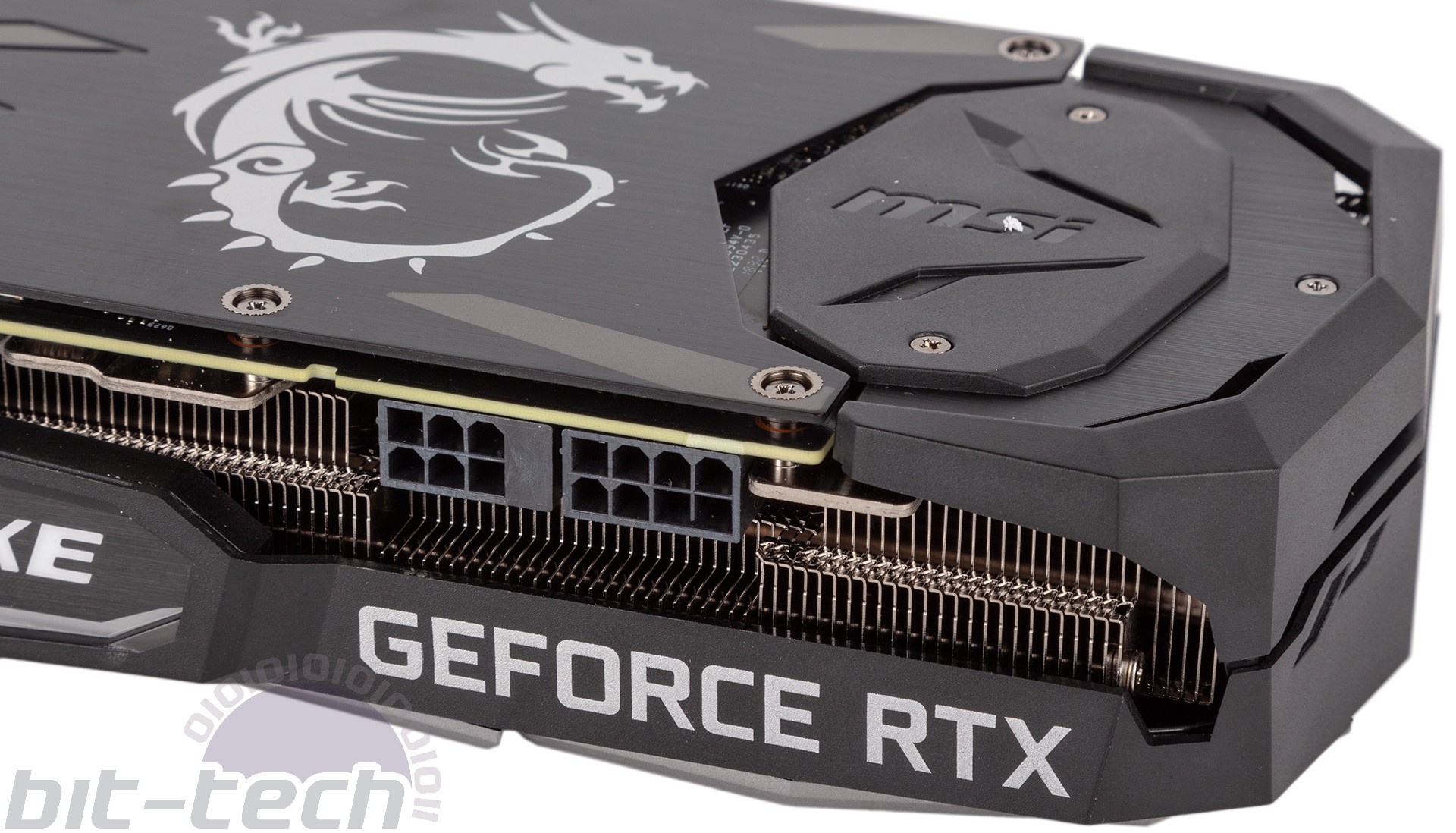 Similarly, the power inputs are unchanged from the reference design, with a six-pin/eight-pin PCIe combination being more than enough (300W with the PCIe slot included) for this card’s 245W TDP. With VirtualLink connected, you could add up to 35W more to this, which still leaves 20W headroom.

MSI uses a trio of its patented 14-blade Torx 2.0 fans to cool the heatsink, all the same size and all spinning in the same direction. The fans feature alternating blade designs, one to accelerate airflow and another to drive it downwards, as well as double ball bearing motors. As ever, the proof will be in the pudding, but theses fans have been used on numerous quality MSI cards. Better yet, so-called ‘Zero Frozr’ technology simply means that this is a semi-passive card, and the fans will turn off completely whenever the GPU is below 56°C. Reactivating the fans happens in two tiers; if 56°C is hit, the central and right fans activate, with the third fan only being called upon at 60°C or above.

Disassembling the card reveals a heatsink that appears to be very good quality. The copper baseplate and heat pipes are nickel-plated for colour consistency, and the heat pipes are also squared off where they meet the baseplate, which MSI says improves heat transfer. A ‘premium thermal compound’, whatever that means, is used between the GPU and contact plate, while copious thermal padding is used to ensure direct cooling of the various VRM components and GDDR6 memory, as well as a separate black contact plate. Even the backplate has direct cooling capabilities thanks again to thermal padding linking it to the rear of critical components.

MSI uses an 8+2 phase power design here, which is the same as the Founders Edition card. The PCB design and VRM components all appear to be stock design rather than having enhancements from MSI’s Military Class family, for example.

The warranty has been given an upgrade from the usual two years to three years in order to match the FE, which is another little bonus. 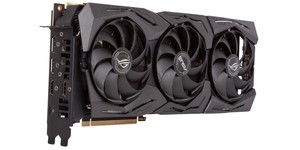 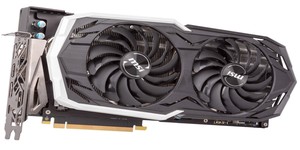