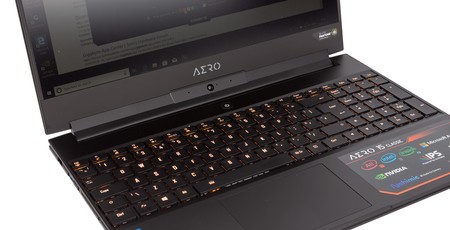 The switch from a GTX 1060 6GB to a GTX 1660 Ti does wonders for this gaming laptop, with Deus Ex’s frame rate improving by 47 percent and 3DMark Time Spy by 49 percent compared to the Aero 15W. Naturally, performance is still some way off that of units with RTX 2070/2080 Max-Q chips, but both of these GPUs exist as options within the Aero 15 Classic family for those that want higher performance. For this 1080p screen, though, a GTX 1660 Ti is sufficient; an average frame rate of 50fps in the Deus Ex benchmark promises much higher performance in most other titles given how demanding it is.

Enabling the AI functionality saw some very modest improvements in the granular 3DMark tests, but in our real-world, GPU-limited game test, the frame rate was no different.

The Core i7-9750H’s higher boosting headroom proves beneficial in the CPU-bound workloads, with the Aero 15 Classic-SA scraping into first in HandBrake and only losing out to the Alienware m17 in Cinebench. That Alienware uses the higher-powered Core i9-8950HK, so that’s unsurprising, but everything using the older Core i7-8750H is comfortably trounced. Furthermore, while the PCMark 10 Photo Editing test relies partly on GPU horsepower, the GTX 1660 Ti-equipped Gigabyte laptop still trounces the PC Specialist Recoil II, even though the latter uses the much faster RTX 2070 Max-Q. Gigabyte really appears to be getting the most out of the 9th Gen Intel CPU. 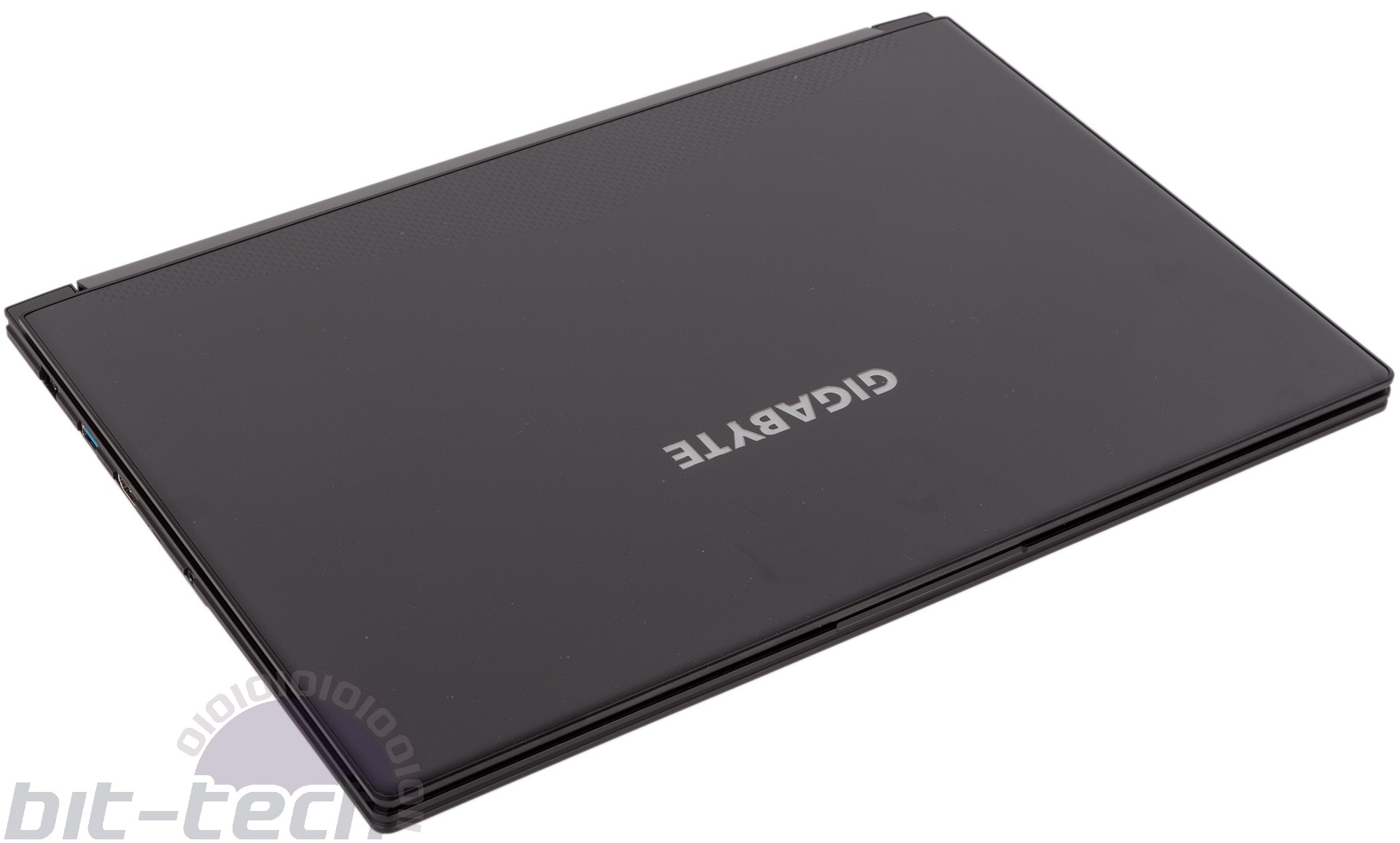 Azure AI seems to benefit CPU-bound workloads the most. The Cinebench and PCMark 10 scores improve a little, but HandBrake’s render time is massively reduced. If this is the sort of work you’ll be doing a lot, it seems very much worth enabling the AI. However, the downside is that the fan curve is more aggressive and louder, probably as a means of maintaining higher clocks. This seems like quite a “dumb” way of achieving more performance, something that doesn’t really require AI, but either way the results do indicate that big improvements are possible.

Gigabyte has done really well optimising the components from a battery life perspective. A result of over seven hours in the Productivity workload is excellent and means you can safely take the Aero 15 Classic out and about for nearly a full day of work without having to scramble to find a mains outlet. That said, a big part of this will be how dim the screen can go, as we test at minimum brightness. In an office with typical lighting, though, it was still usable. Meanwhile, a 73-minute gaming workload result (half brightness) is another solid result and a mild improvement over the previous-gen model.

Interestingly, Azure AI seems to benefit gaming on battery (six minutes extra, or eight percent) but not so much productivity (20 minutes less, or five percent). This isn’t an especially large difference either way, but the productivity result suggests it might be more optimised for performance over efficiency.

The laptop’s storage holds up to scrutiny as well, delivering 3GB/s of sequential reads and 1.6GB/s on writes and proving very fast in the trace-based workloads too. The take-home message is that, as usual for a PCIe NVMe M.2 SSD, storage is rarely going to be a bottleneck, and the laptop will consistently feel fast and responsive. 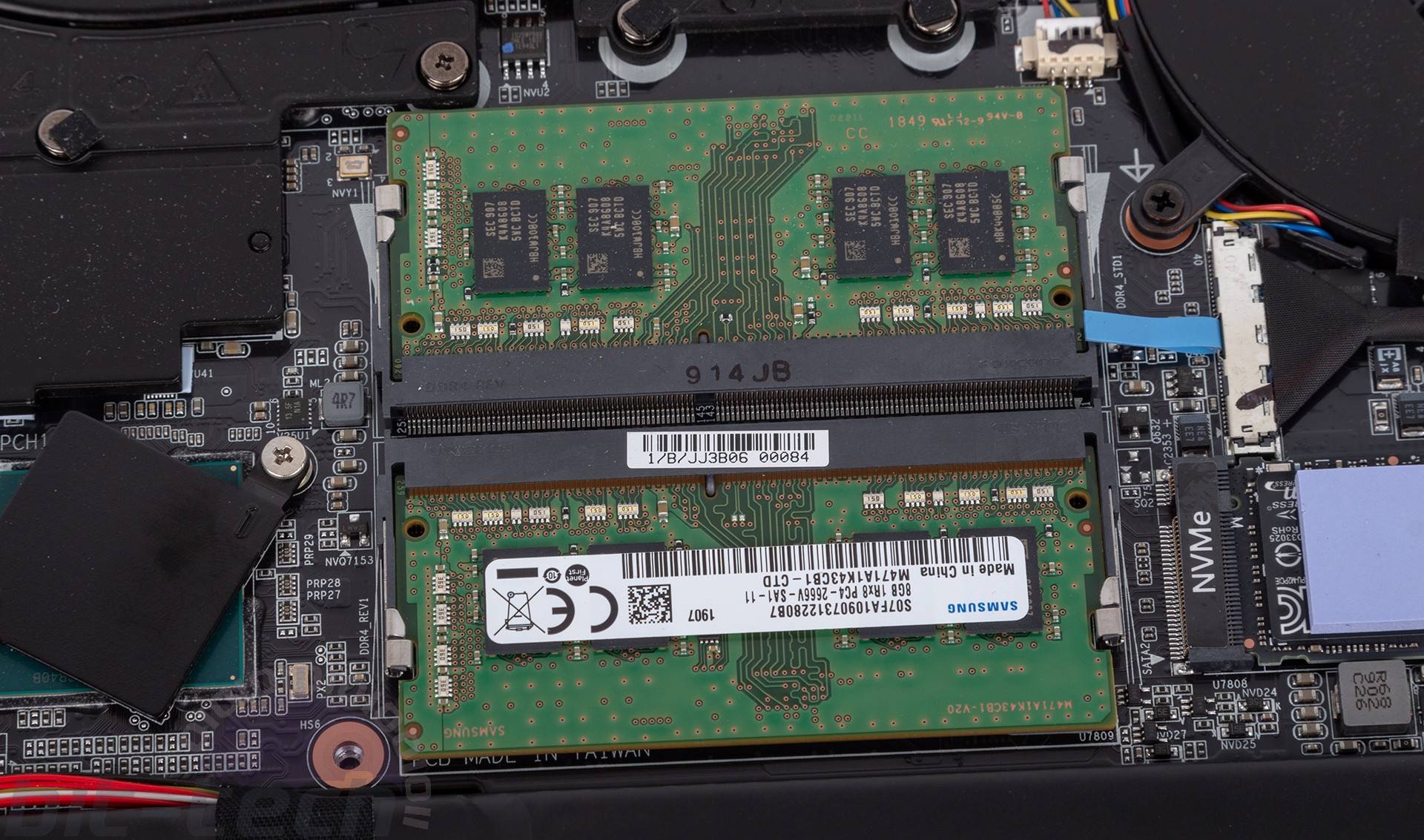 Display testing throws up one or two wobbles such as a slightly misformed gamma curve at one extreme and some luminance uniformity that could be improved, but overall it’s a good set of results. The white point out of the box is a tad cool, but many people like this anyway, and it’s not extreme. Colour accuracy is also excellent, as we measured an average delta E value of just 1.28 out of the box, improved to a mere 1.13 by using the ‘Pantone’ preset.

Although the CPU technically has a peak boost frequency of 4.5GHz, all-core workloads will see lower speeds that also take into account thermal headroom. In this laptop, a prolonged Prime95 small FFTs test saw all-core boosting start at 4GHz but quickly settle at 3.3GHz with the CPU never above 80°C. This is 300-400MHz higher than we ever saw with the previous CPU, the Core i7-8750H. With AI switched on, the initial burst hits 4.2GHz and the CPU settles at 3.4-3.5GHz with higher average fan speeds, which indicates again that it takes a fairly aggressive approach.

A CPU stress test is one thing, but a gaming workload tends to be the biggest test of a laptop’s cooling. Applying just such a load, the CPU and GPU peak at around 90°C – high but safe. The fan speed stays below 4,000 RPM, leaving the Aero 15 Classic-SA fairly quiet compared to how some gaming laptops can be. With that in mind, configurations with more powerful GPUs (anything RTX) are likely to push this cooling system to louder levels and/or see frequencies impacted heavily. The high temperature also means the GPU settles pretty quickly down to its rated base clock of 1,455MHz, unable to boost higher. This isn’t a bad thing in and of itself – performance is still solid, after all, but the performance of the components is definitely confined somewhat by the chassis design, and this is likely to be more evident with higher-spec configurations. There were no major differences in how this test played out once AI was enabled.

A thorough examination of the Aero 15 Classic-SA has shown it to be a solid performer across the board, so all that’s left to do now is assess its position in the wider market. 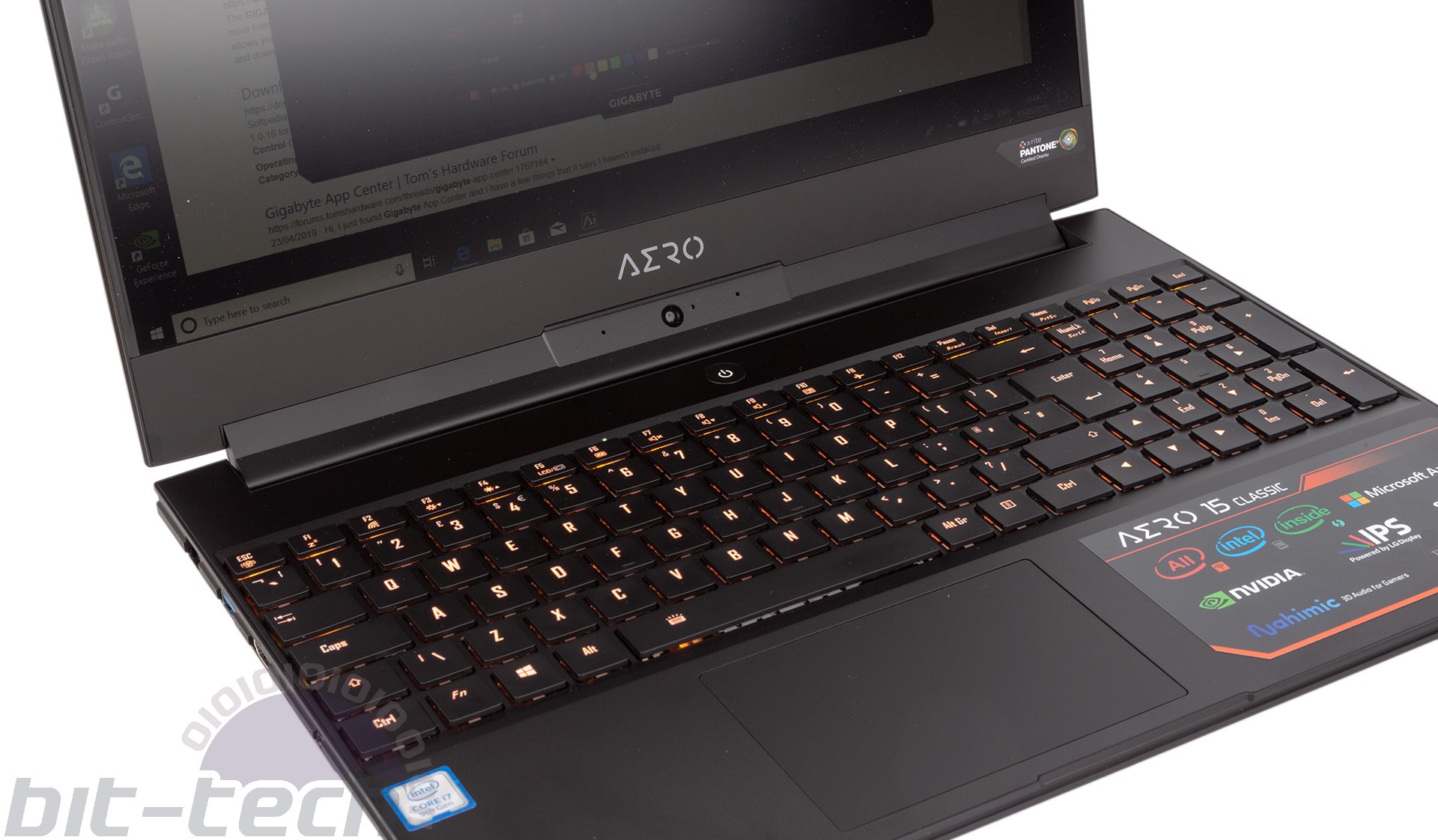 Thankfully, the quality is also very high whichever way you look at it. The chassis is well built, lightweight, and slim, and it includes a nicely laid out and comfortable keyboard with decent (though not class-leading) RGB functionality. The IPS screen is excellent, delivering strong out-of-box results in nearly every regard and still retaining a gamer focus with a 144Hz refresh rate. Thunderbolt 3, USB 3.1 Gen 2 Type-C, Gigabit Ethernet, and an SD reader ensure connectivity is up to scratch, and the huge battery can keep things running longer than many competitors. It’s also easy to upgrade the RAM and to add a second M.2 SSD.

Downsides include the poorly placed webcam and the fact that the cooling system seems pushed close to its limits even with this baseline configuration. The Azure AI also doesn’t add much in terms of tangible benefits, and its brute force approach to fan speeds/clock speeds isn’t especially impressive except in a few select cases. Some of the software/UI is also a bit clunky, but Gigabyte isn’t the worst offender here.

If you’re chasing raw performance, you can likely achieve most of what Gigabyte has done here for less cash, but as a balanced unit that’s equally happy being used out and about as it is plugged into the mains, the Aero 15 Classic-SA is a great premium option. Some imperfections and relatively high UK pricing hold it back from our top award, but this is nevertheless an impressive laptop that sets high standards for other 15” units to aspire to. 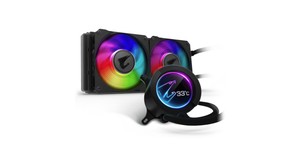 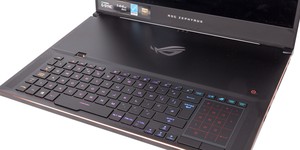