Customised PCs are quite a hot topic at the moment as is the PC modding scene - they're both aspects of the PC industry that the likes of laptops and other mobile devices - even iMacs except for one or two rare examples - utterly fail to cater for. Here, the PC has been and will remain for some time, the King, as enthusiasts and PC manufacturers look to push the envelope in making their products unique.

Of course, offering a properly pimped-out PC isn't an easy task, but DinoPC has recently acquired some new talent in this regard and the Troodon is the fruit of this concerted effort. Why make a PC that's over-the-odds outlandish and obsessively gorgeous? Well, as we've already mentioned, it's about being unique, but it's also a great way to advertise the fact you know your stuff when it comes to PC hardware. Click to enlarge
It seems that DinoPC, then, has not only created a great-looking PC in the Troodon, but it certainly knows what hardware is likely to tempt customers too. Living up to its name, of course, Troodon was a dinosaur and according to a quick Google search, the word means wounding tooth, thanks to the gnashers of the animal in question being fairly gnarly for its type and size. The same could be said of the PC version here - despite being housed in a relatively unassuming NZXT S340 with some subtle dinosaur scale vinyl on the front panel (it's actually so subtle that in some photos it's blanked out by flash and reflection), this is one of the fastest PCs we've ever tested. Click to enlarge
You'd kind of hope so too at £2,399, but beyond the impressive hardware this thing simply looks epic. The outside sports the subtle black vinyl and a dinosaur footprint logo that work well with the glossy black finish of the case itself. Thankfully there's a large side window too, which is just as well as the interior is probably something you'll want to gaze at quite regularly and not just because it cost you over two grand. It looks stunning, with some fantastic cable tidying, a super-clean layout and a great-looking water-cooling system. There's no rigid tubing here but it's used in a way that's still very sleek and also allows the company to save time and not worry about shipping - it was couriered to us pre-filled and arrived in perfect working order. Click to enlarge
So let's get down to the hardware. For starters, a couple of LED strips have been used to illuminate the gorgeous interior and catch more dino vinyl on the radiator. Again, this is fairly subtle and offers a slightly edgy look. The Mayhems red pastel coolant does a great job of punching some colour into the insides and matches well with the RAM, ROG board and braided cables. It's almost a shame that the EKWB GPU waterblock is facing down as it too looks fantastic.

The rest of the cooling system comprises a Watercool Heatkiller IV CPU waterblock, EKWB DDC pump and reservoir combination, EKWB Vadar fans in a push-pull configuration for maximum cooling and a full-height EKWB double 120mm-fan radiator. The reservoir is placed so it looks great but is also easily filled should you want to swap coolants plus there's possibly scope here for adding a second GPU too. However, with a massively overclocked GTX 980 Ti in tow, you probably won't need one, even if you're looking at 4K gaming. Its core has been increased from 1,000MHz to 1,210MHz, the memory from 1,753MHz to 1,923MHz and the resulting boost clock from 1,076MHz to 1,286MHz. Since it's water-cooled, there's no noise coming from it either. Click to enlarge
The CPU of choice is a Core i7-6700K, which has been overclocked to 4.7GHz using a vcore of 1.35V. This is a monstrous overclock for an every day PC but the system sailed through our benchmarks without a hitch. The jewel in the Troodon's crown though has to be its Samsung SSD 950 Pro. High performance PCI-E-based SSDs are a bit of a luxury for sub £1,000 PCs but we absolutely expect them at this price. You get a 256GB model - perhaps not quite enough for heavy gamers, but there's a 2TB Seagate Hybrid hard disk for some extra storage space for those occasionally-used games and programs. You can, of course, customise the specification and a 512GB version of the 950 Pro would set you back another £121.

DinoPC has chosen Asus's Maximus VIII Hero as the heart of the system, which makes use of the onboard audio. It's likely you'd be able to fit some VRM waterblocks at some point what with it being an ROG motherboard. There's 16GB of DDR4 memory too in the form of Corsair's 3,200MHz Vengeance DIMMs, while a Corsair CS650M PSU should offer a fair amount of headroom given how power frugal Skylake and the GTX 980 Ti are. Finally you get a three-year warranty that covers labour costs for the duration, parts for two years and postage costs for the first year 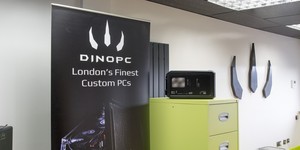