It seems to be the year for Asus to try to really make a move on the peripheral market. We have already taken a look at its flagship mouse with our Spatha Review, and a little while back we also checked out the ROG Claymore keyboard. Now, we have the new headset; the ROG Centurion. The Centurion is an enthusiast-level 7.1 surround headset that is looking to fill a gap in the market.

Click to enlarge
Inside the packaging, we have far more than we are used to seeing; of course the headset is there, but we also have another set of earpads, a strange looking amp/audio station, two cables, and even a headphone stand. It is rare that we see such a complete bundle included with a headset, but with a price tag of over £200 Asus does have to ensure the user sees where the money has gone.

Click to enlarge
The Asus ROG Centurion is quite large and bulky, and it is also heavier than most headsets we have reviewed in the past. This is all down to the 10 individual drivers that power the 7.1 surround sound. The sleeved cable that protrudes from the left earcup is rather thick and did get in the way on more than a few occasions. Click to enlarge
The futuristic design is in keeping with the rest of the peripheral range, and we can see the Mayan detailing featured on the side of the headset is present. The ROG logo lights up red and has a couple of dynamic lighting options. There are also orange decals on both earcups; it is interesting that these are permanent colours, and we do not see RGB lighting utilised like we did with those other Asus peripherals. Click to enlarge
As you can see, the earcups look very close together, and when we first tried the headset they were very tight; with a little bit of careful manipulation and after a few hours of wearing them, however, they did loosen up, and they became comfortable. Even though the headset is quite heavy, the large foam headband does a very good job of distributing the weight and maintains a good level of comfort. The microphone can be bent and moved as needed, and again there is a little flash of orange on the tip that ties it in with the rest of the design. The microphone performs adequately; it isn't the best but it is certainly acceptable, and there were no complaints whilst using VoIP - everyone could understand what was said, but there were comments saying that the input was not as clear as usual.

Click to enlarge
We have already touched on the double headband as one of the features that ensures comfort, but the giant ear cushions that completely surround your ears are also great. Out of the box, the Asus Centurion comes equipped with breathable protein leather foam pads attached, but these are interchangeable with a fabric mesh cushion. Click to enlarge
The cushions are easily removed and can just be pulled off. Here, we have one of each cushion attached to show the differences. We found that the leather cushion caused the ears to get a little bit warmer than the mesh ones, so we changed them based on this. The good thing with having both sets is that most people will find something that suits them. The headband features a rather nice embroidered ROG logo; it's nice to see that it is a neutral colour and is quite subtle.

Click to enlarge
If we take the ear pads off, we can see the dedicated drivers. There are five in each side, and you can switch between 7.1, 5.1 and Stereo ensuring that you do get a good audio experience regardless of what you are listening to. Straight out of the box, we found the headphones to be somewhat bass heavy; this muffled the mids and made us a little bit concerned. Luckily, Asus has us covered, as a plug-and-play USB audio station is included, which gives us a lot of control over what we hear. 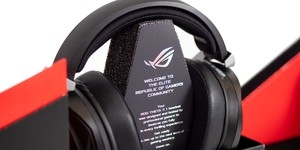 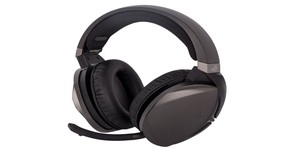