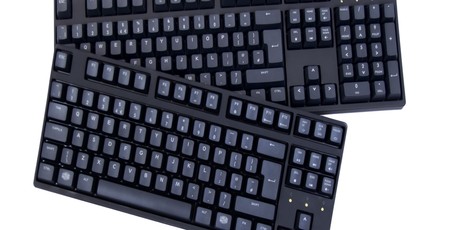 Today sees Cooler Master launch two keyboards that are the successors to the popular Quick Fire Rapid and XT mechanical keyboards: the full-size MasterKeys L PBT and the tenkeyless (TKL) MasterKeys S PBT. They are very simple keyboards with no LEDs or software suite, but they do still have plenty of interesting features to sink our teeth into. 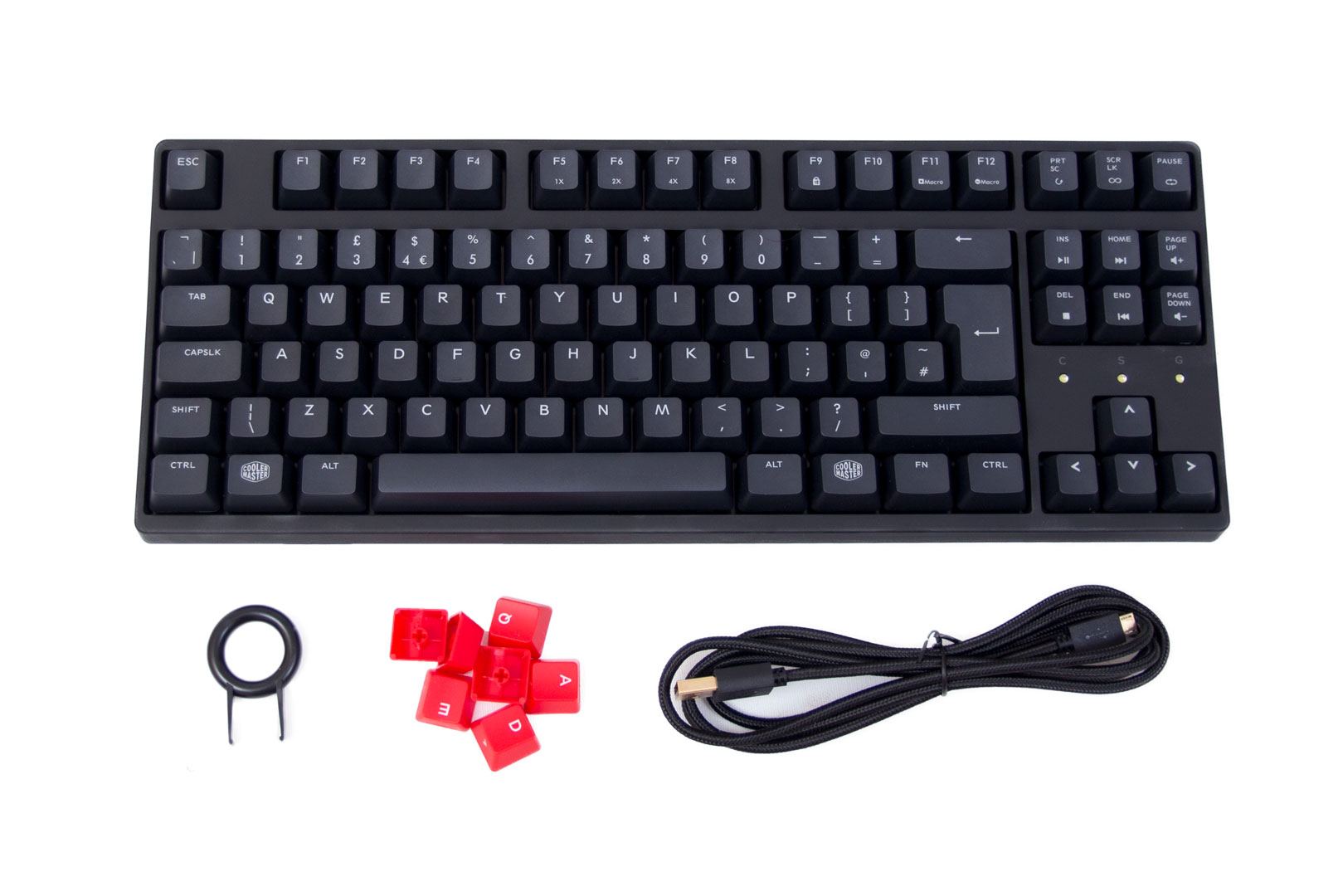 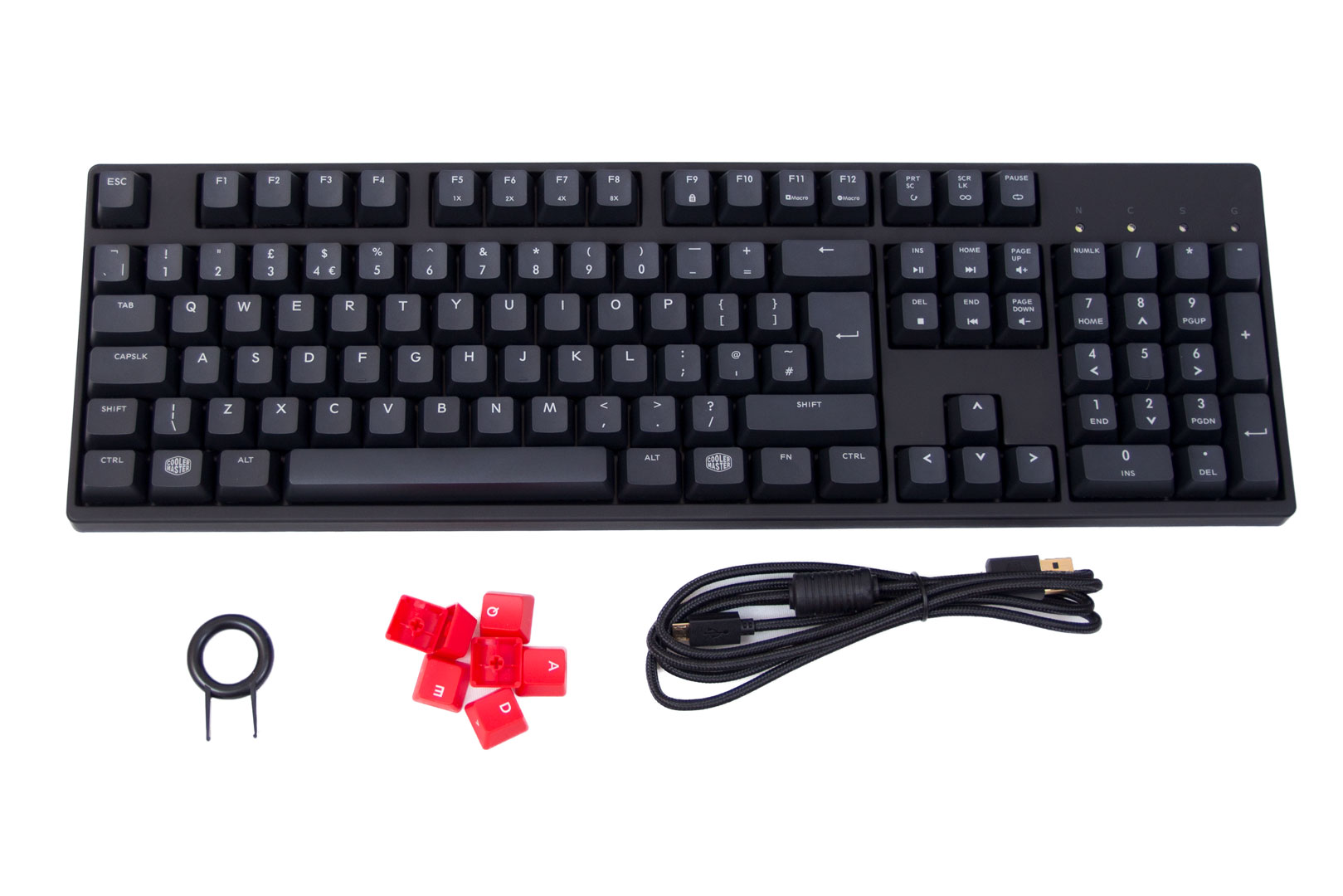 Inside the packaging, the contents are very similar; there is the keyboard, a keycap puller, seven red extra keycaps, and a cable. There is also a little user guide which is quite useful, as it outlines the functionse available via the FN key. The only real difference is the cable. 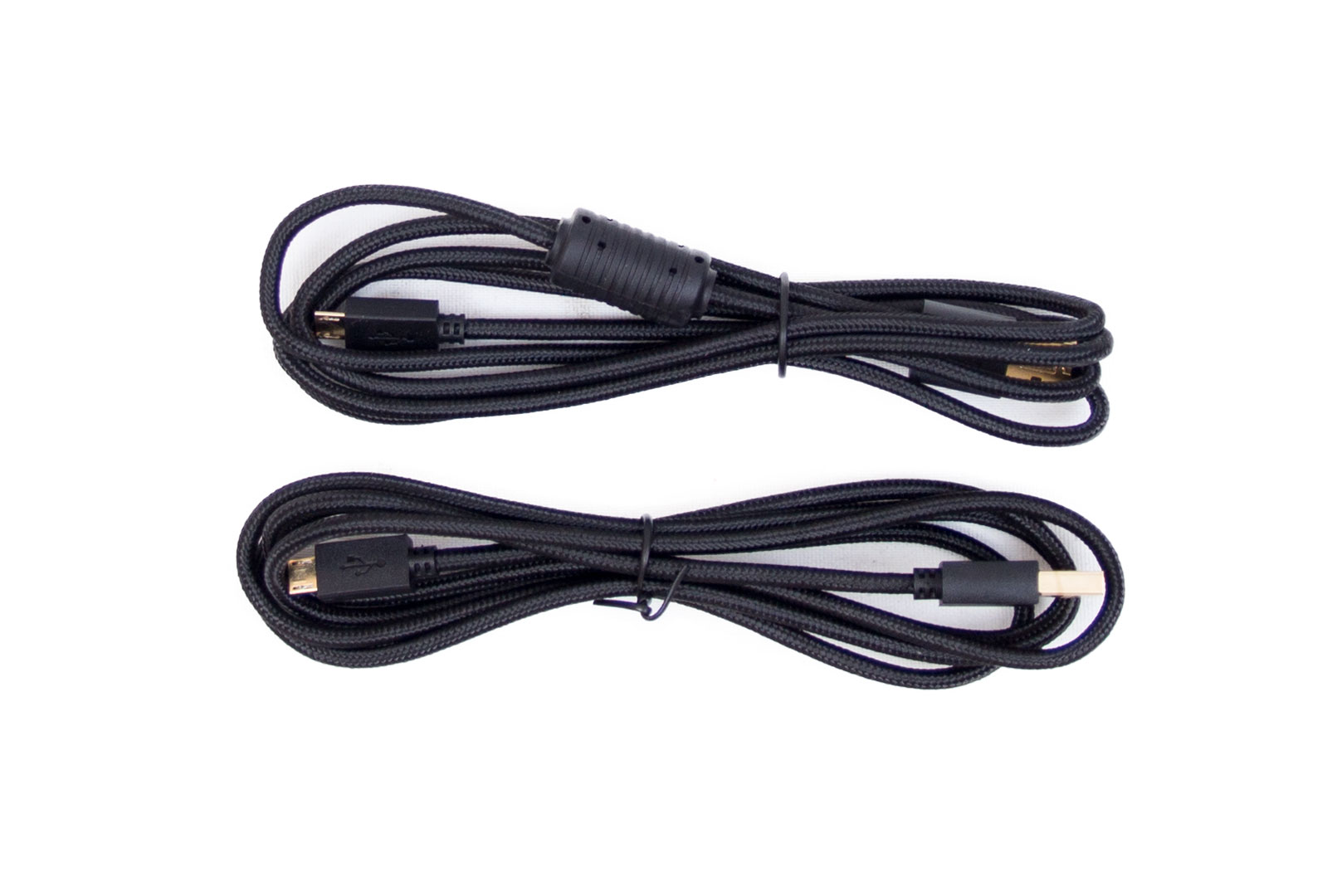 The Cooler Master MasterKeys L PBT has a ferrite bead on its cable. These are basically magnets that suppress high frequency noise or EMI in a circuit. The ferrite bead isn’t intrusive or a negative in any way; we were just surprised to see that the cables were not the same. In terms of packing a product, we would have thought it would be quicker to pack the same cable with all products. 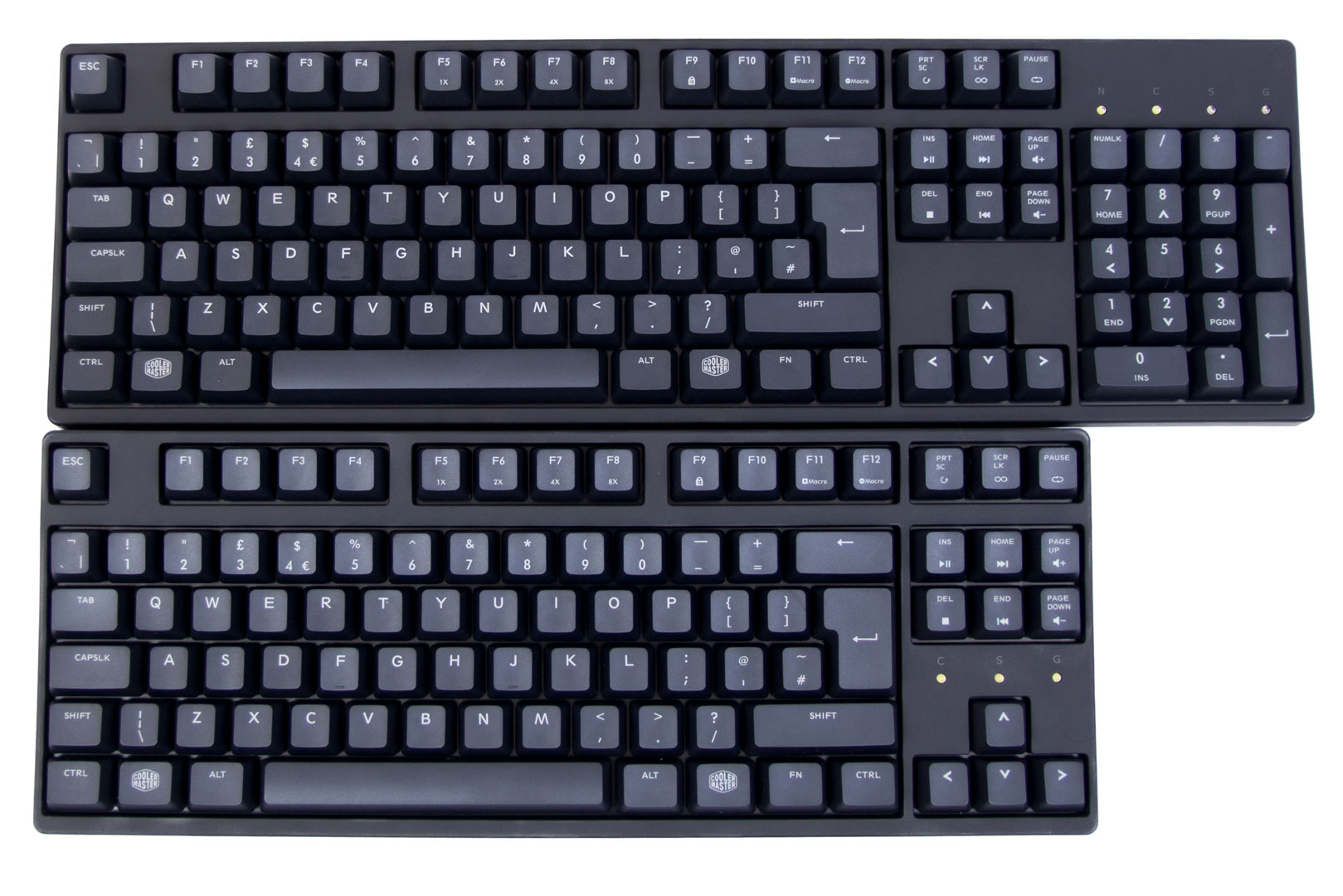 The keyboards themselves are identical except, of course, for the Numpad. We are big fans of TKL keyboards, as they are nice and compact, and when we are travelling or going to events, they fit into a camera bag or suitcase nicely. Some people will require a Numpad, though, and it really is just personal preference. Both keyboards have the same features, which we will look at later. 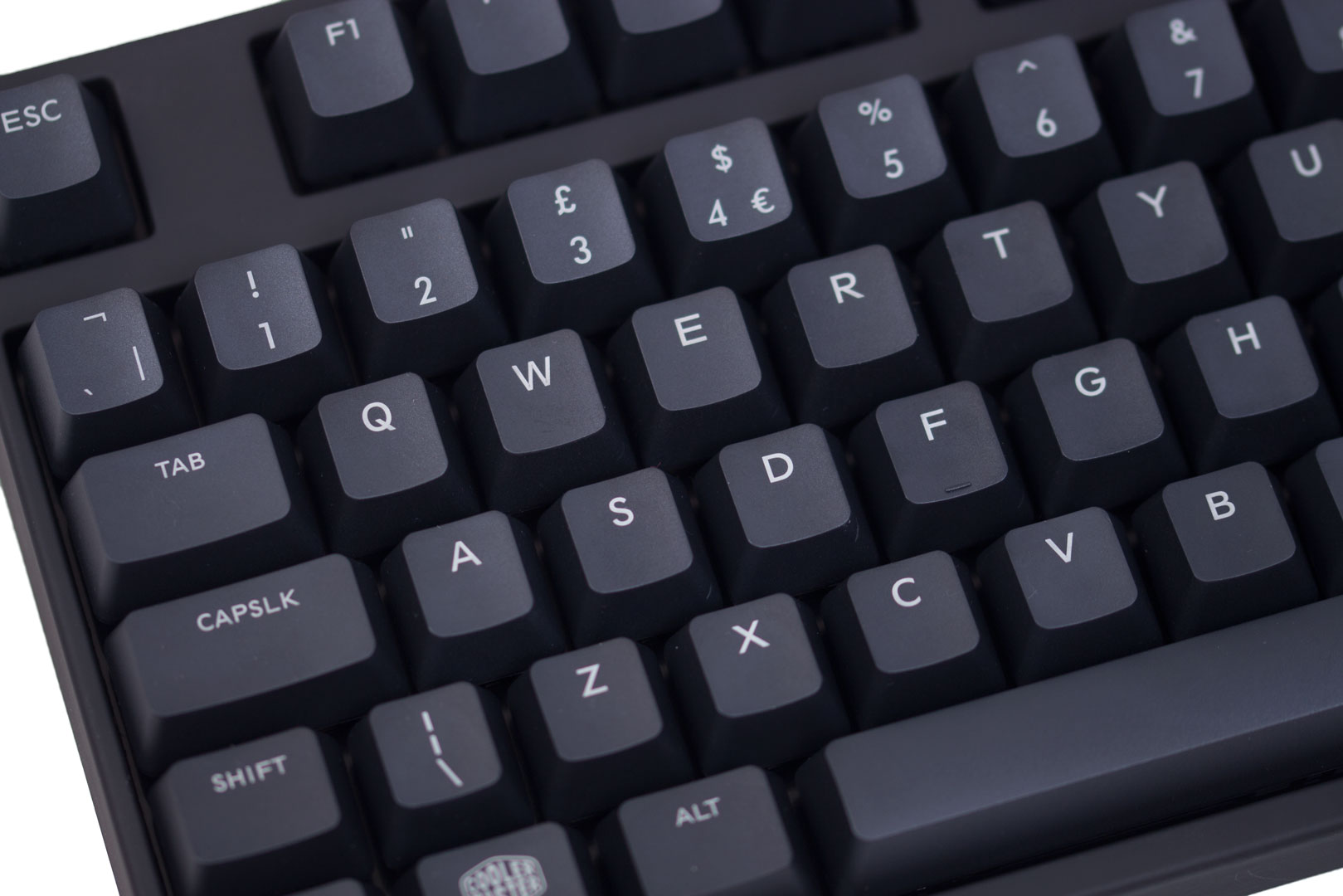 As with other Cooler Master keyboards we have looked at in the past, these two keyboards have a very nice, clear font without trying to appeal to gamers with a hard-to-read mess. This is something that really does annoy me personally, and while you may disagree, we think this font is perfect for its target audience and a good match for the overall design. 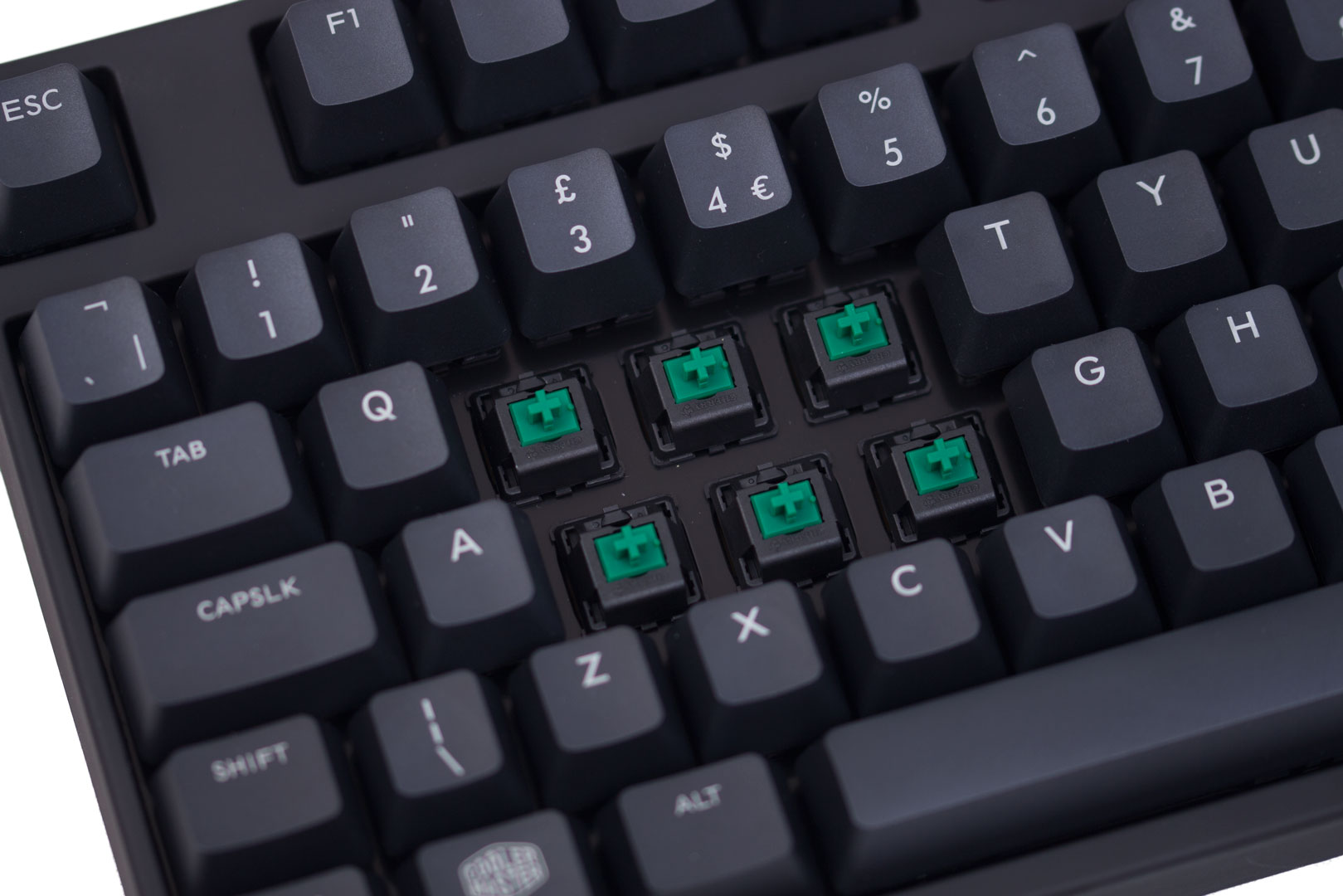 Speaking of target audience, this is where this keyboard range gets interesting. You may have thought already that the keyboards are very similar to other keyboards that Cooler Master has on the market already. You would be correct; the main difference is the keycaps that we'll look at next. Something that really excites me personally are the switches; Cooler Master is doing Cherry Greens!  I am a big fan of these regardless of whether they are Gateron or the slightly superior Cherry. The easiest way to describe a Cherry Green is to say it is like a Cherry Blue, but it takes more force to push it down – it's heavier. They are great for typing. So, why are we excited about greens? Well, they are hard to get hold of, especially in bulk (seriously, I go directly to Cherry for mine, and I can only get 360 at a time!), and I was very surprised to see Cooler Master release them as part of an off-the-shelf keyboard. Other companies such as Vortex do have keyboards with green switches, but these keyboards are very much aimed at the enthusiast market. Cooler Master has tried to target enthusiasts in the past with Topre switches, but they didn’t really do as well as expected for various reasons. These MasterKeys PBT keyboards are also available with Cherry Red, Brown, Blue, and Silver switches, so there is a switch for everyone. 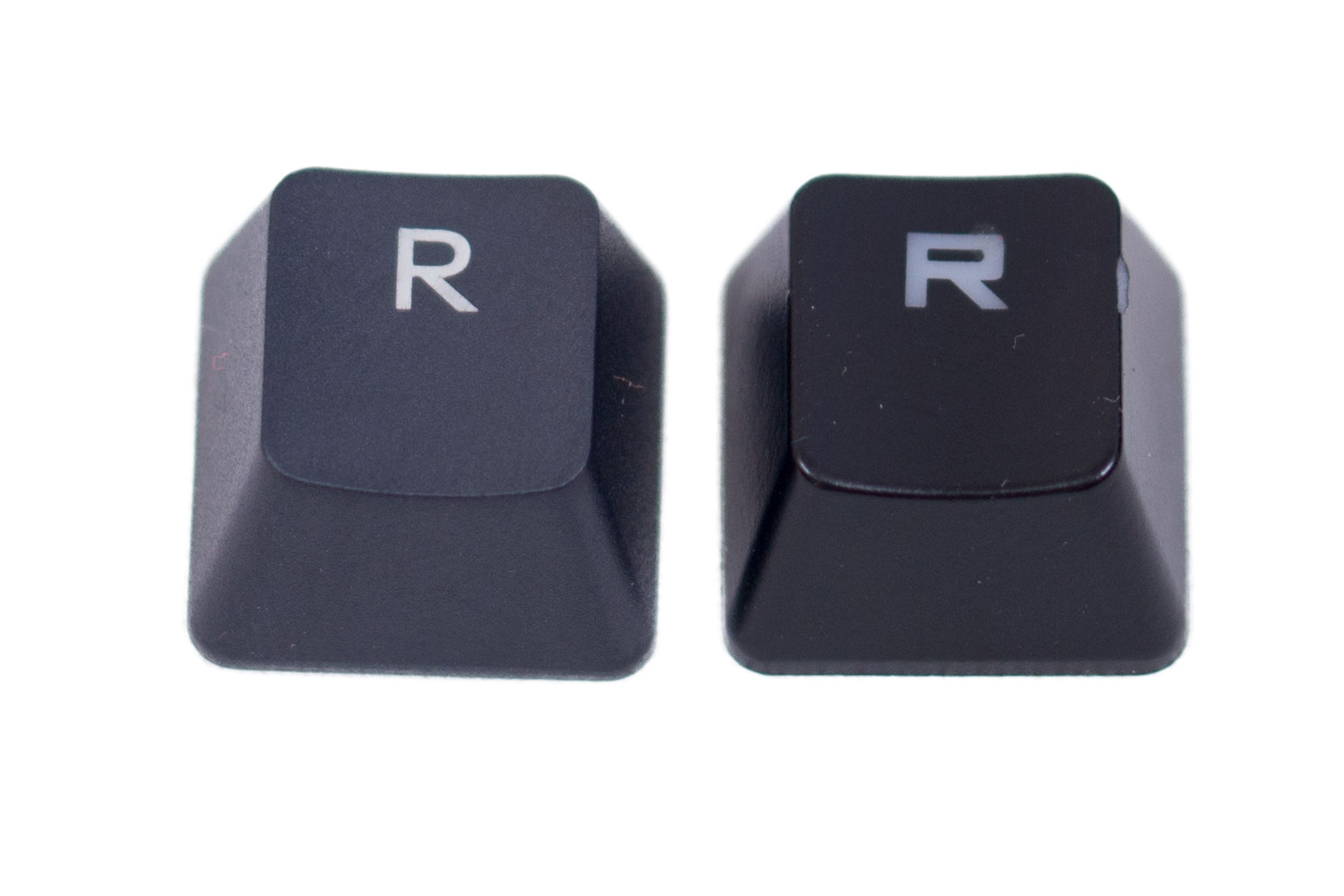 The keycaps are the main reason for this new series of MasterKeys keyboards. Most keycaps are made with either ABS or PBT. In the picture above, the left switch is PBT, and the right is ABS (it's also from an old keyboard - sorry for the chip along the edge). These are both plastics, but both have different properties. ABS is cheap, but it gets shiny after prolonged use. PBT is stiffer and more durable but also more brittle; this isn’t a problem unless you hit PBT keycaps with a hammer or jump on them, though. A lot of keyboard enthusiasts prefer PBT over ABS, myself included. There are other materials such as POM (a higher-grade plastic than PBT but very expensive and quite silky) and PC plastic (a translucent plastic). These are generally only used by keyboard enthusiasts, though, and are far more expensive. Cooler Master usually uses ABS as do most other companies that target the gaming audience. 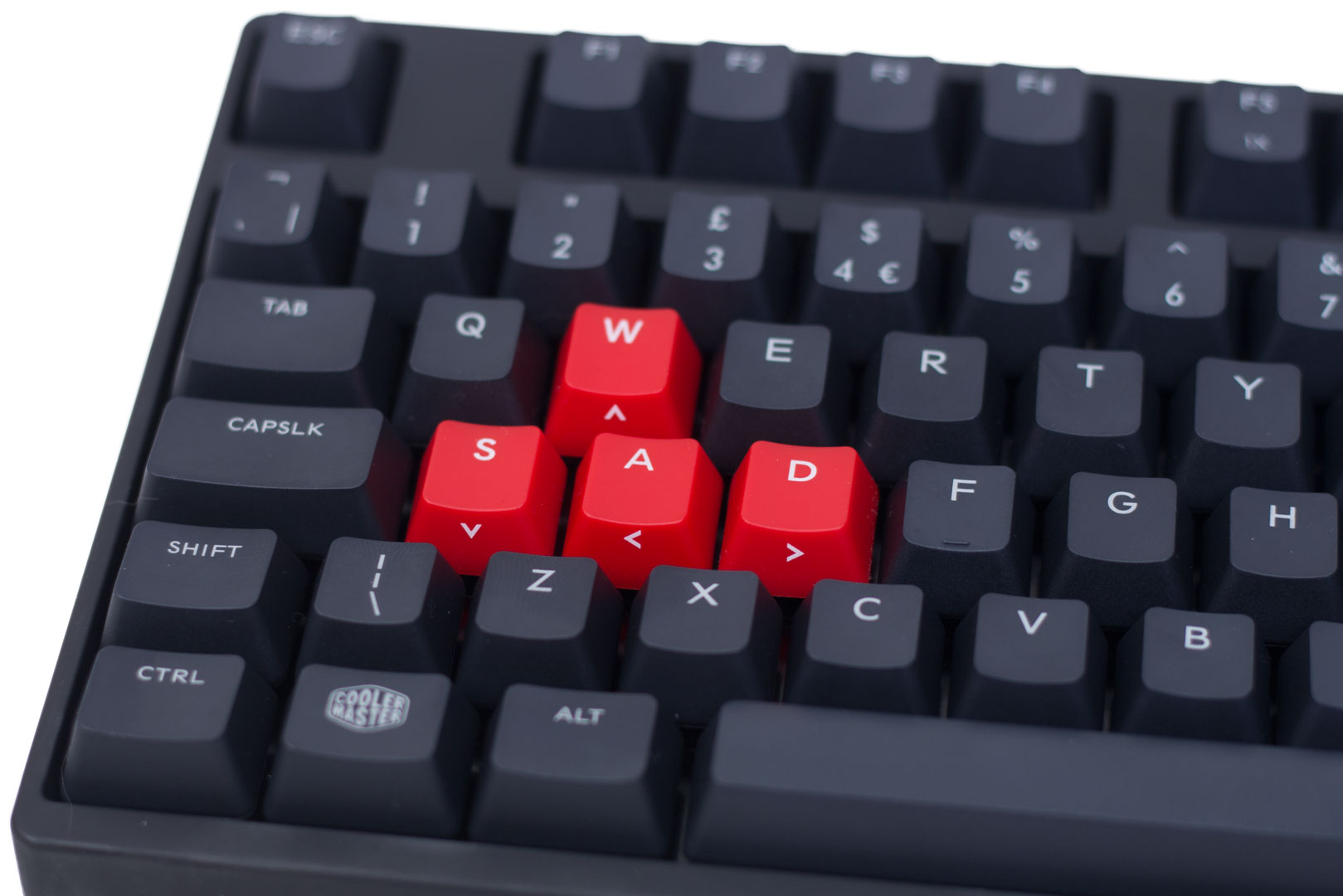 PBT keycaps feel a lot more substantial than ABS keycaps, and Cooler Master has made them feel even more solid by making them 1.5mm thick. We mentioned the seven extra red ‘gaming’ keycaps that are included with the MasterKeys L & S PBT keyboards. These cover WASD as well as Q, E, and R. However, the extra keycaps are not as high quality and are far thinner; after feeling how good the standard keys were, these were a bit of a let-down, and we were a bit disappointed by them, especially as the normal keycaps are the key selling point. 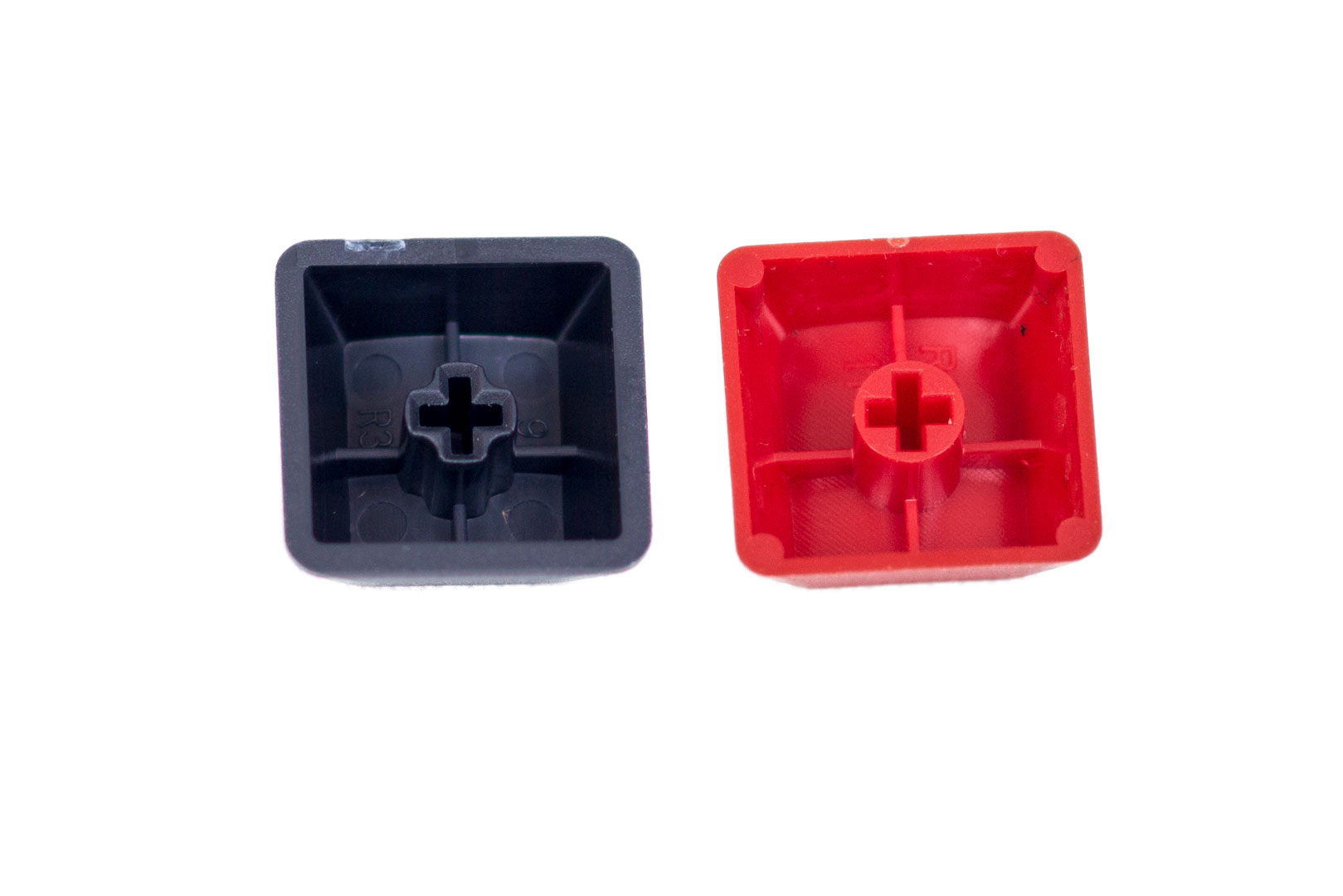 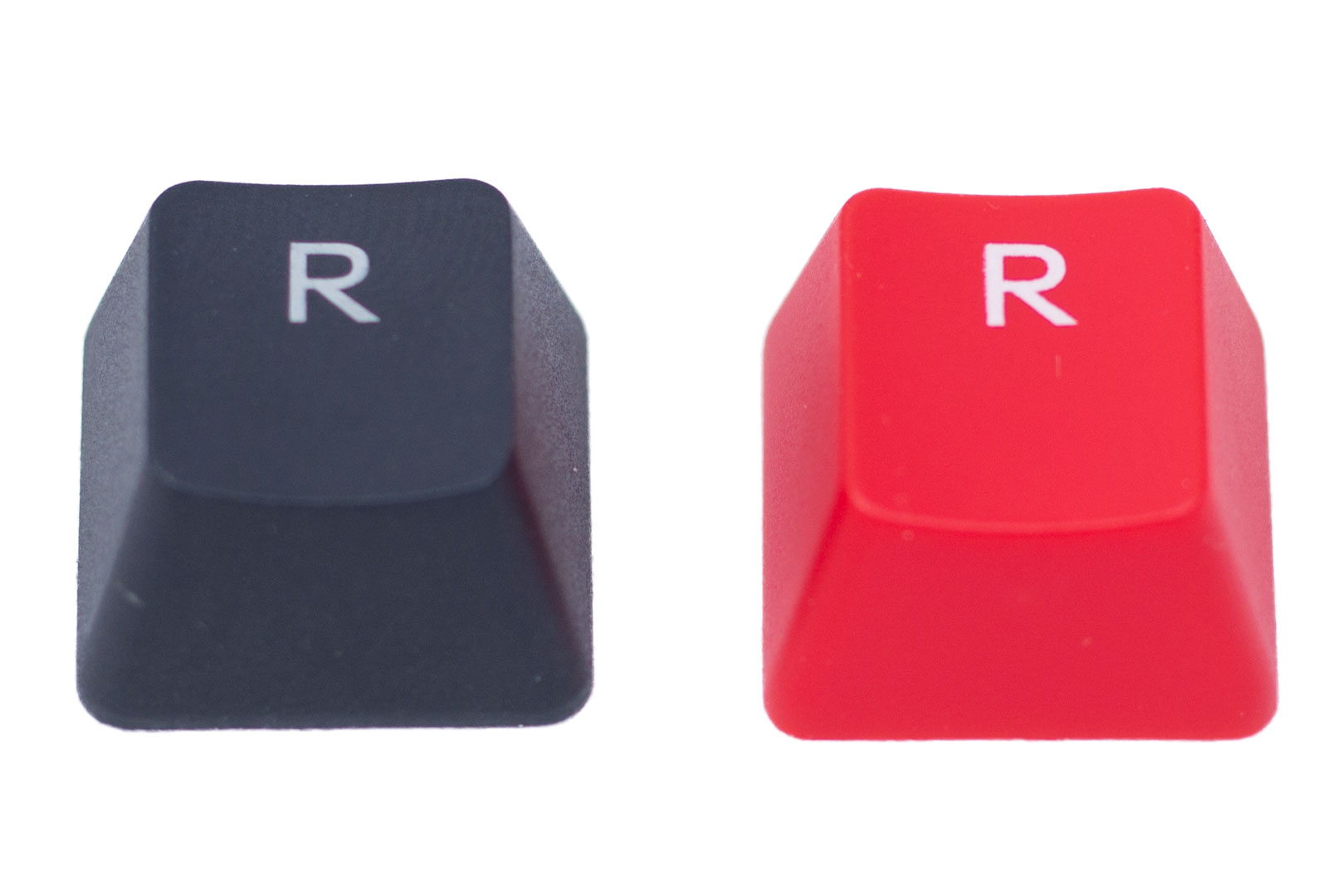 You can tell the difference instantly when looking at the red keycaps compared to the 1.5mm PBT caps. Usually, they would be perfectly fine, but when they are surrounded by other keycaps which are superior they feel like they shouldn’t be there at all. As these keyboards are aimed at the keyboard enthusiast rather than gamers, they seem more like an afterthought than anything else. 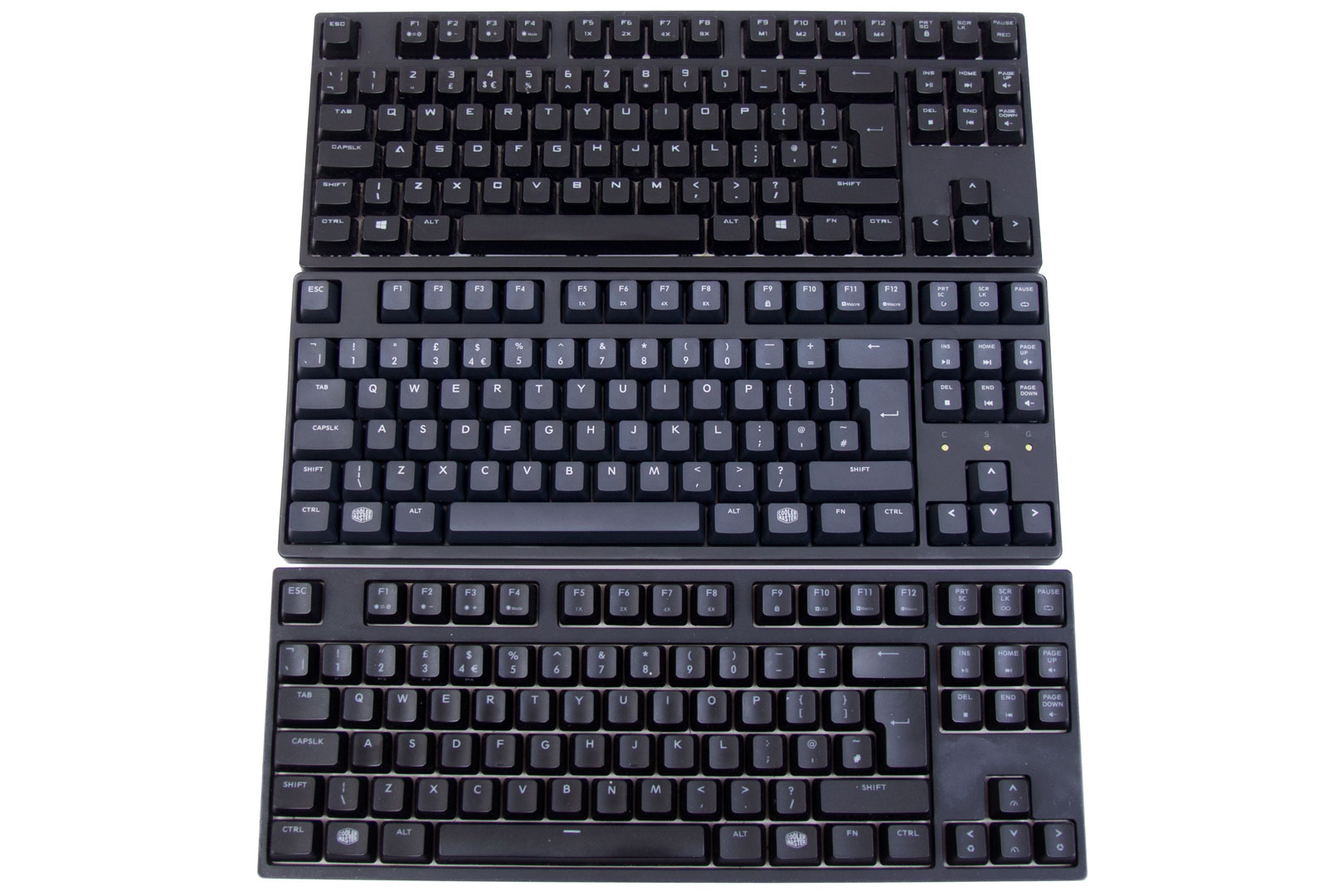 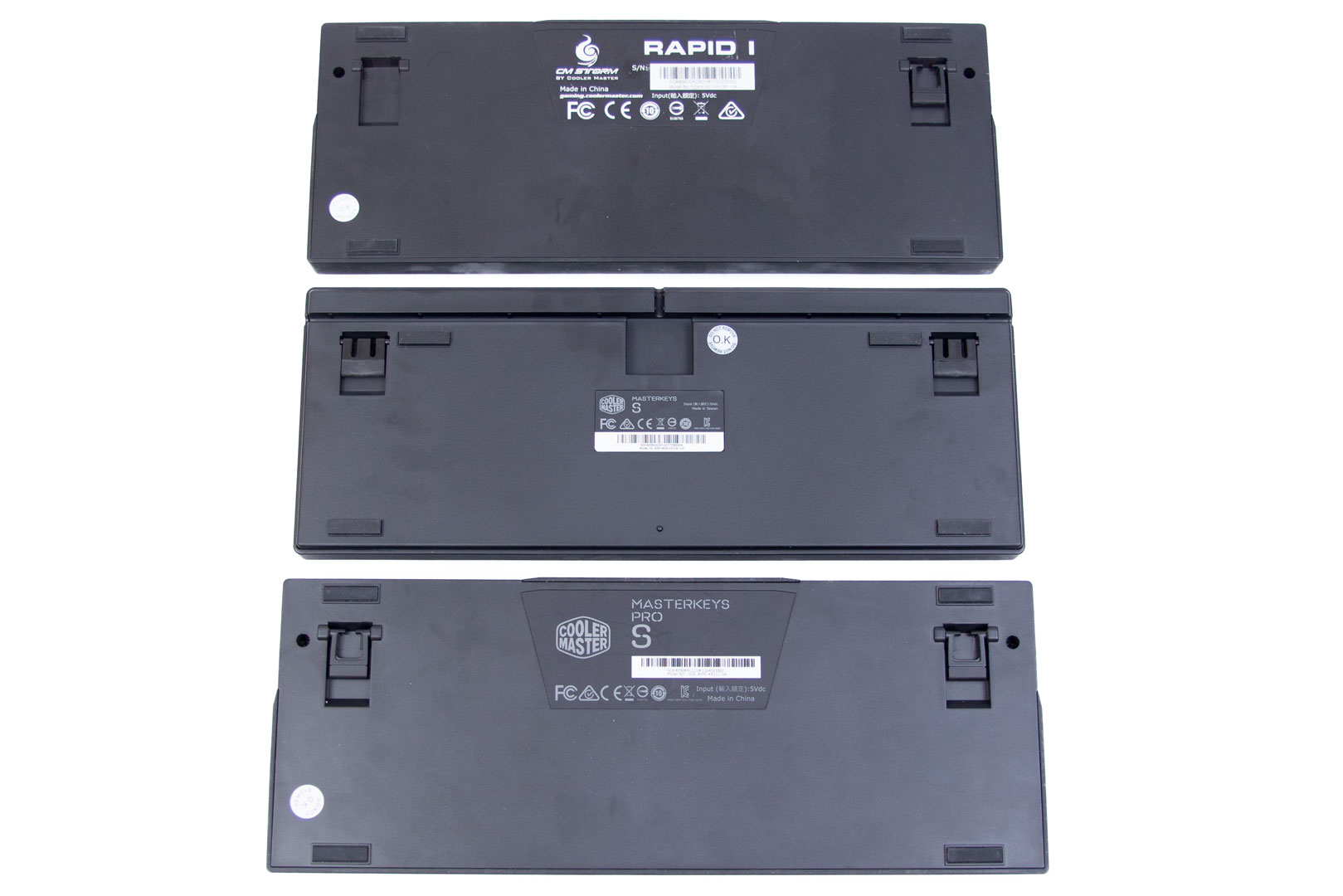 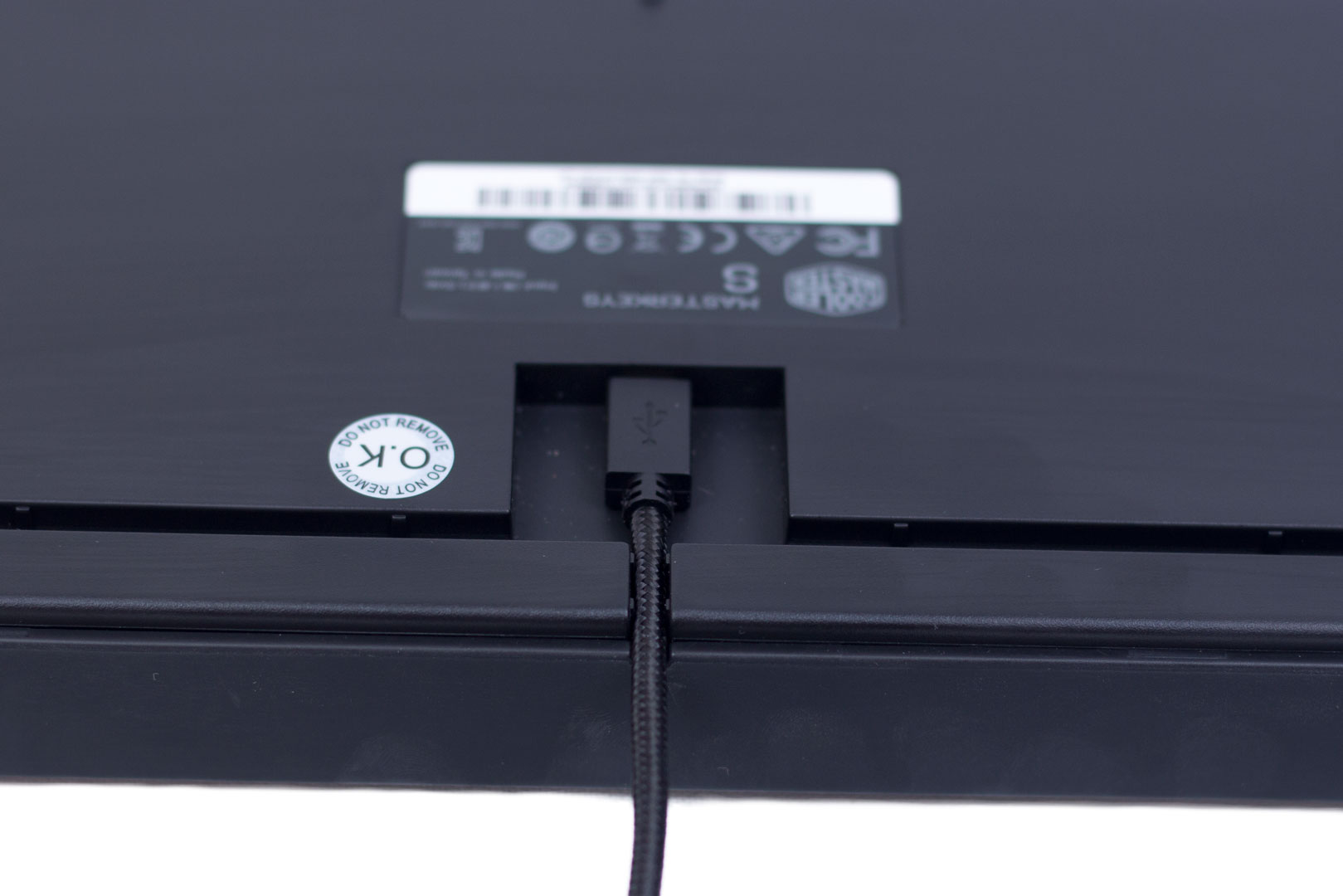 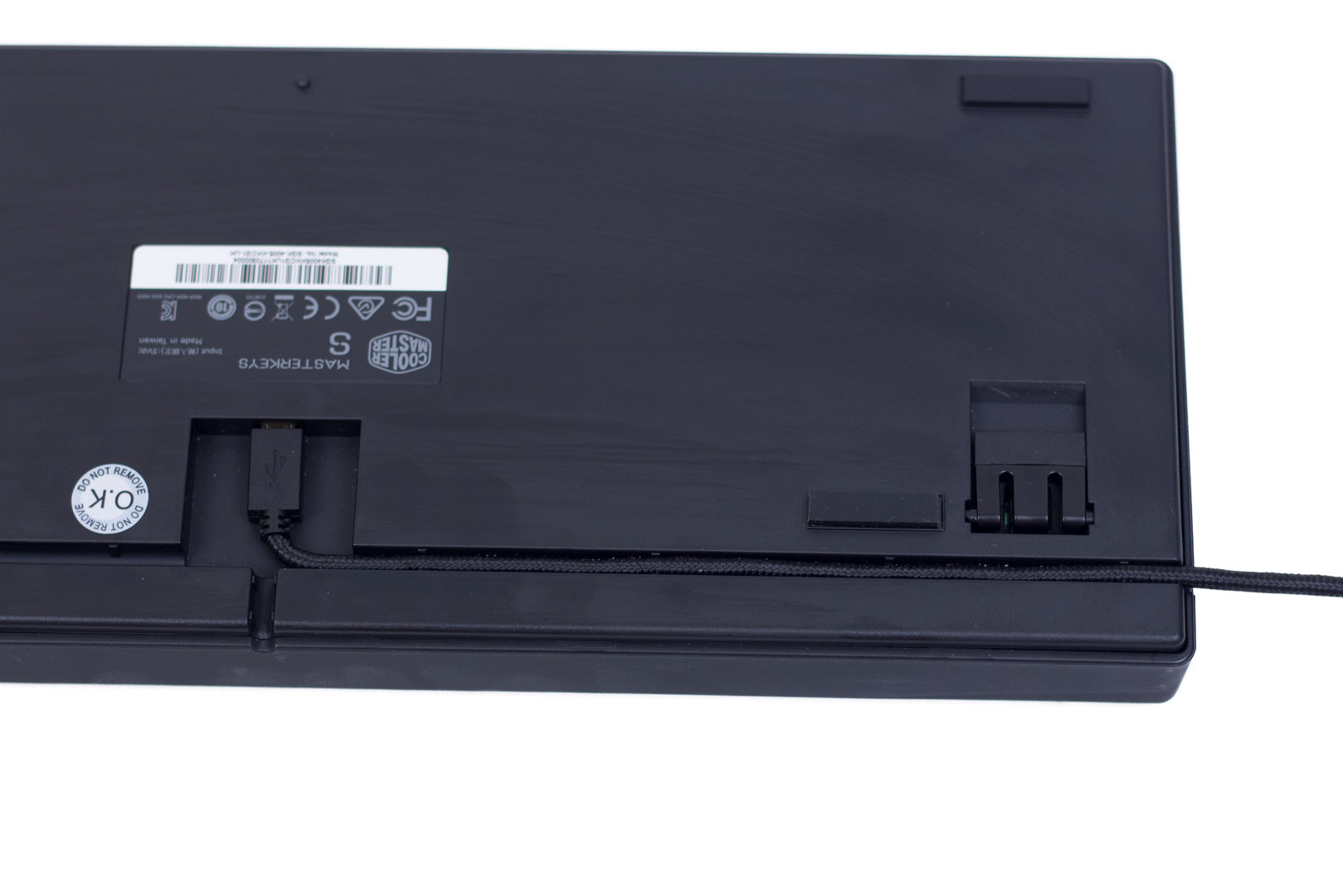 On the Cooler Master MasterKeys L PBT, the connector is underneath the keyboard, and the cable can be directed in whichever direction you desire. This is a very simple change but makes all the difference; it allows users to create a clean desk environment far easier than before. 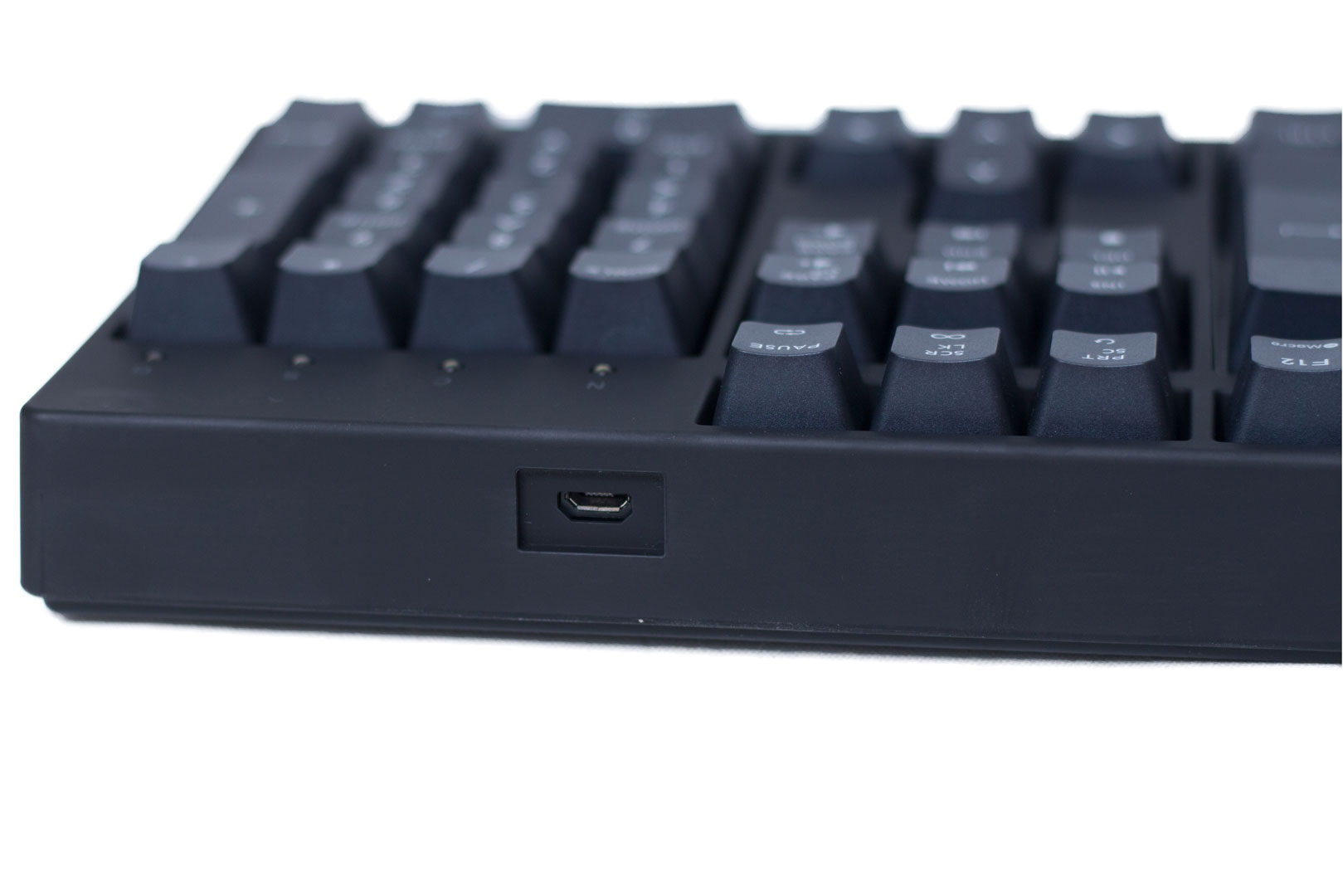 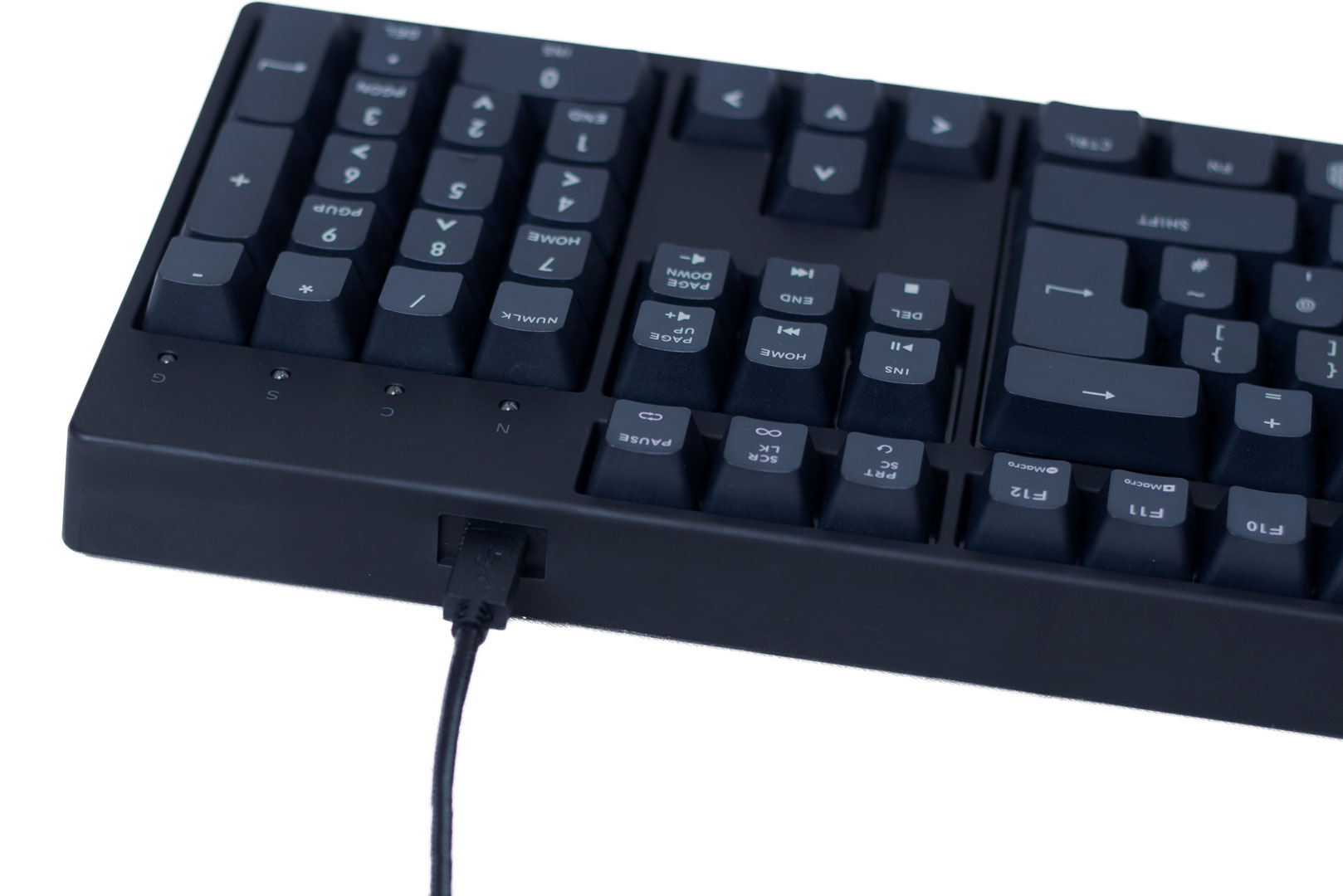 With the Cooler Master MasterKeys L PBT, however, it seems Cooler Master forgot about the progress it made with the TKL version. It has again put the connector on the right side of the keyboard. There must be a reason for this, but from a user’s perspective, this is a little disappointing. There is one positive, however, which is that the cable at least has a straight connector and not a right-angled one. 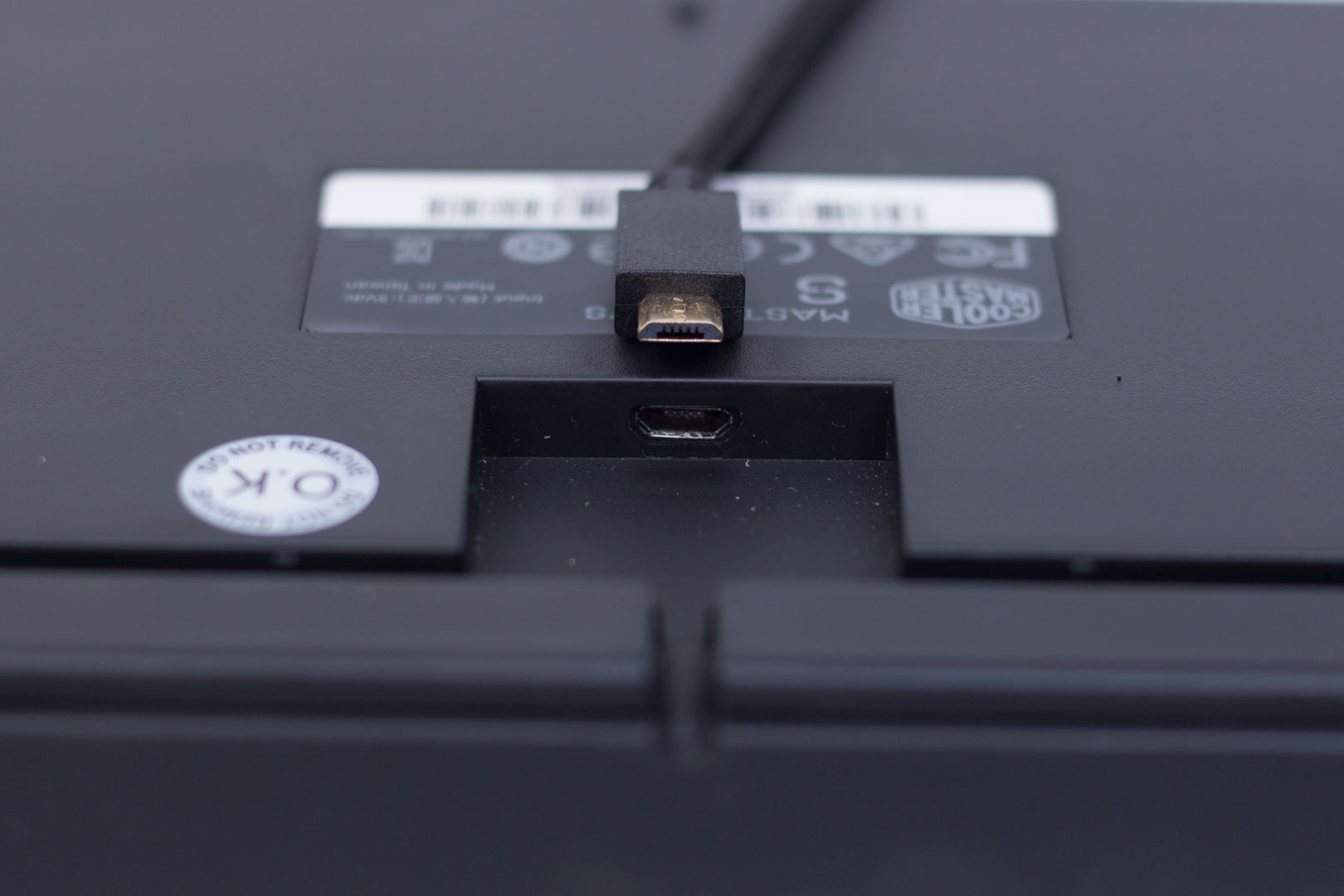 The Cooler Master MasterKeys S and L PBT both use micro-USB connectors, and the cables are 1.5 meters long. The cables are braided and feel like they are decent quality; there are no complaints here. 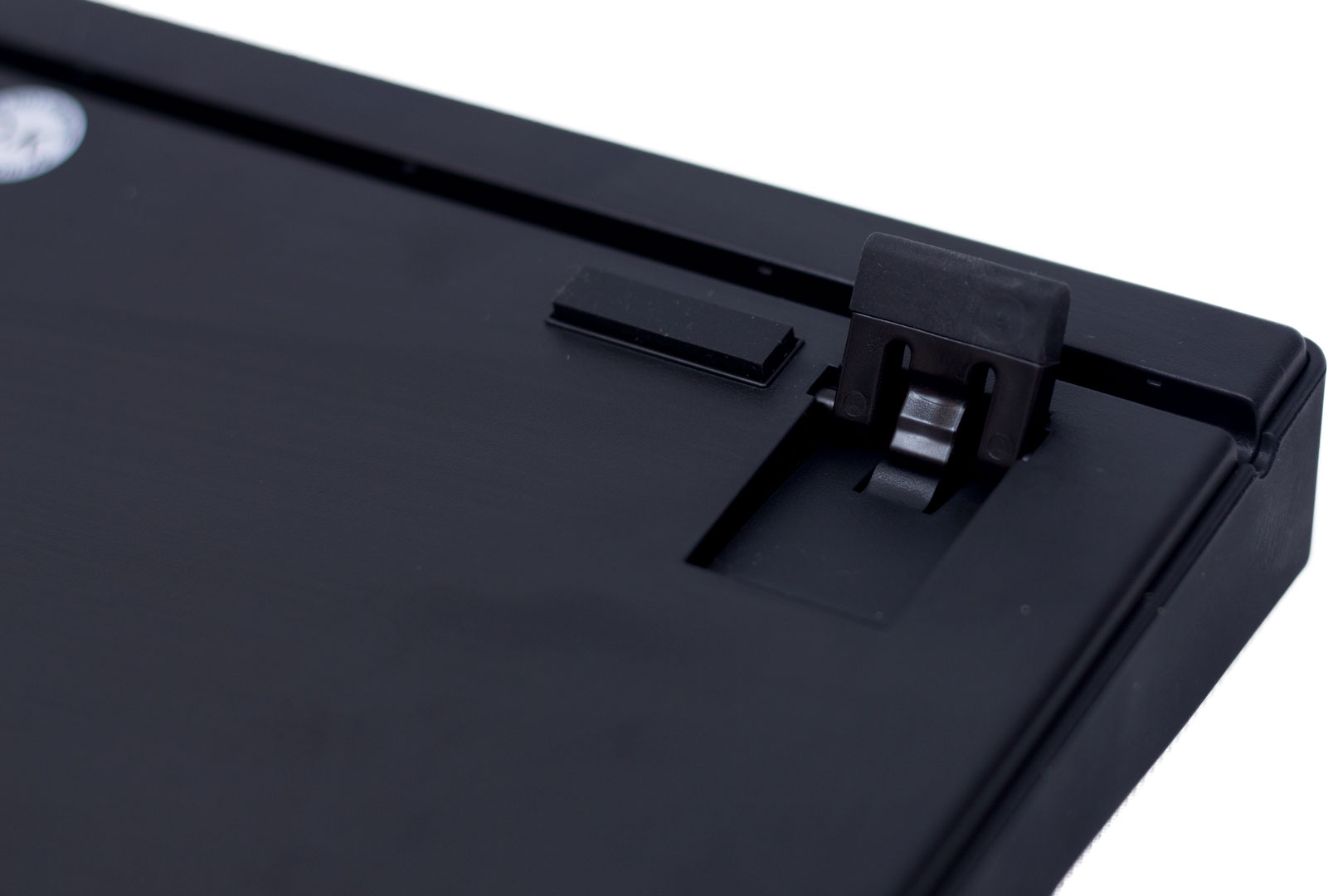 Continuing our tour of the keyboard, there are four rubber feet on the bottom that make sure the keyboard doesn’t slide when you are typing. There are also two flip-out feet that have rubber tips, and these allow you to tilt the keyboard ensuring a comfortable typing experience. 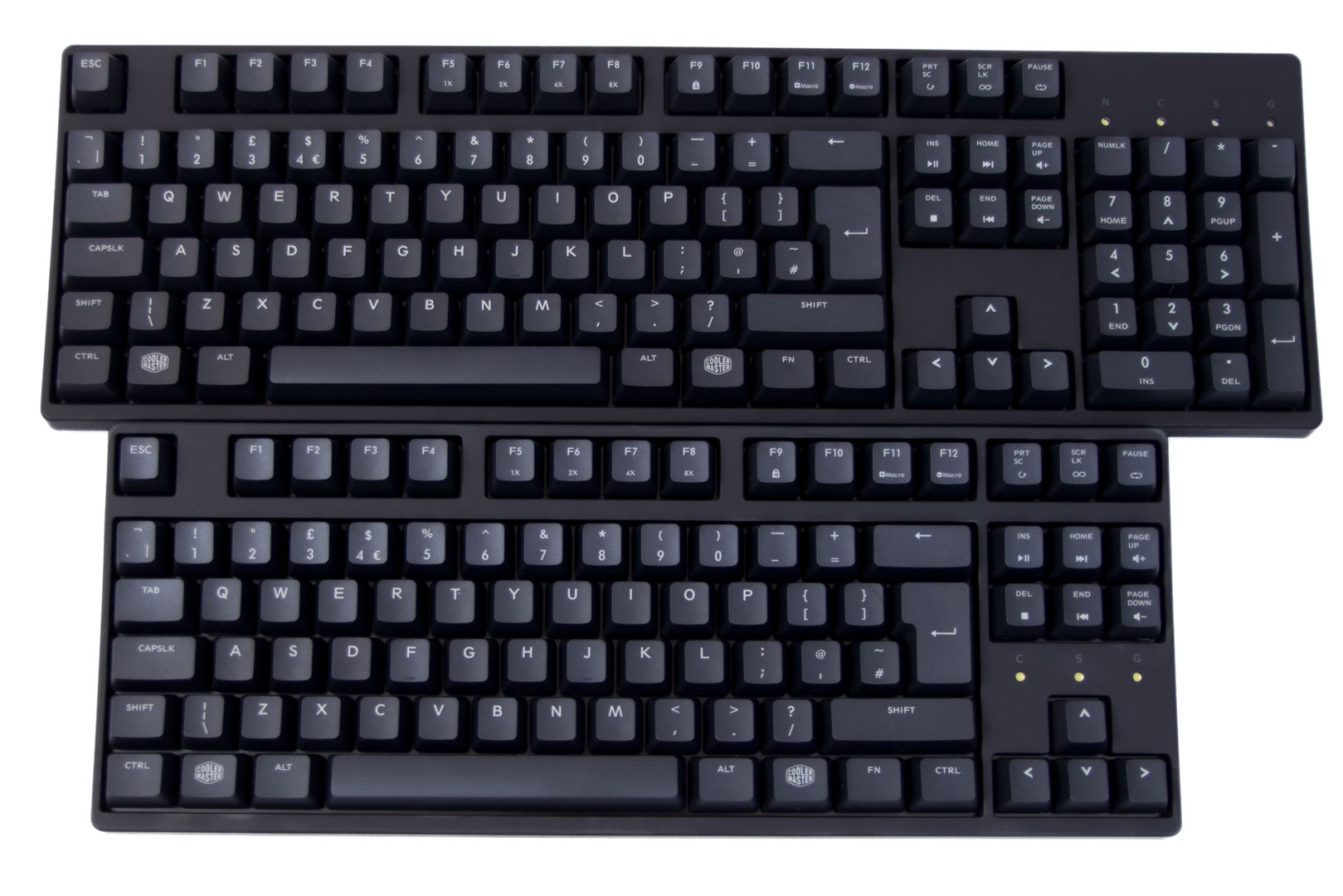 As already mentioned, there are very few differences between the Cooler Master MasterKeys L PBT and the TKL version, and all of the functions are the same. The keyboard is very simplistic and has no backlight or software suite. The additional functions are all accessed via the FN key. 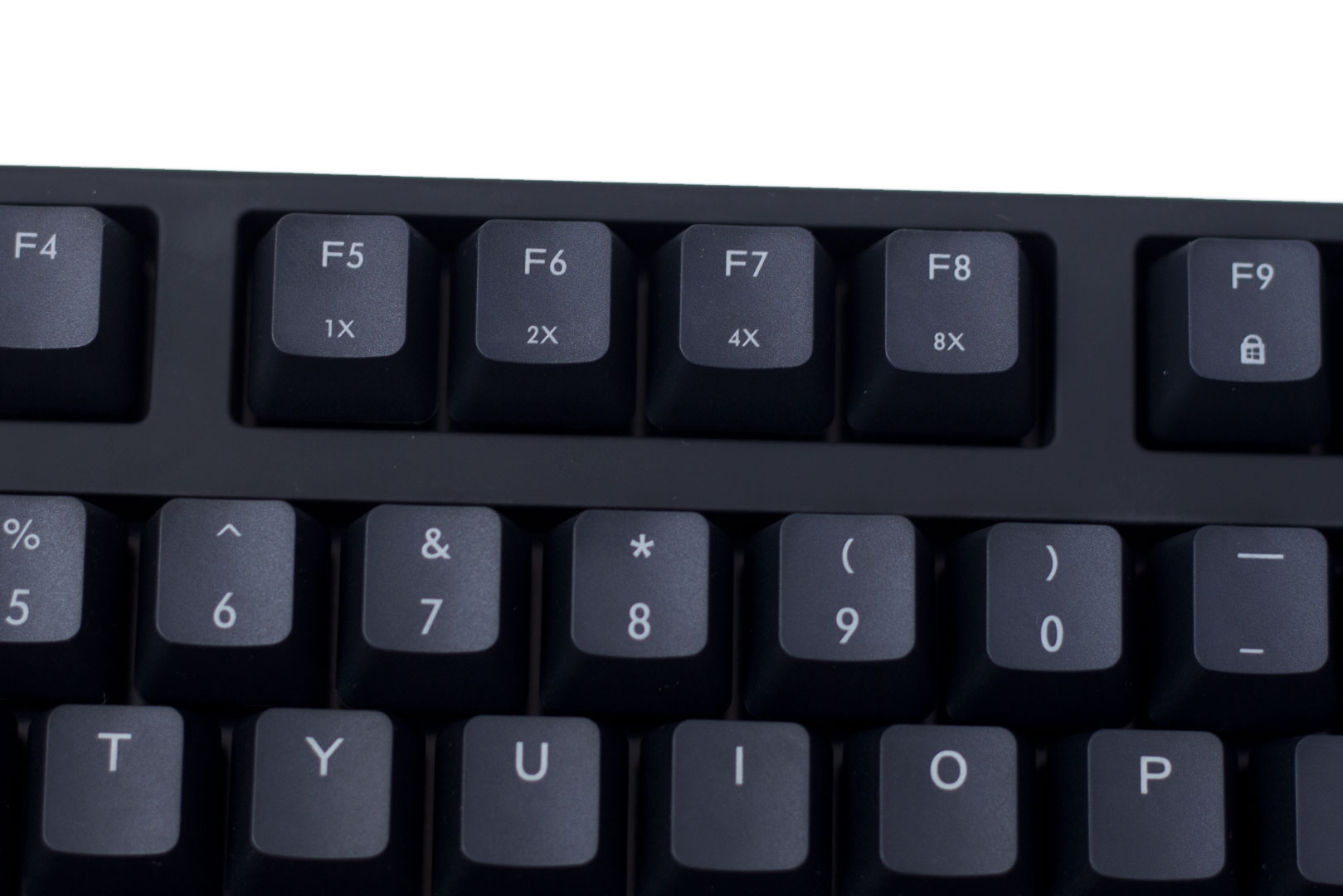 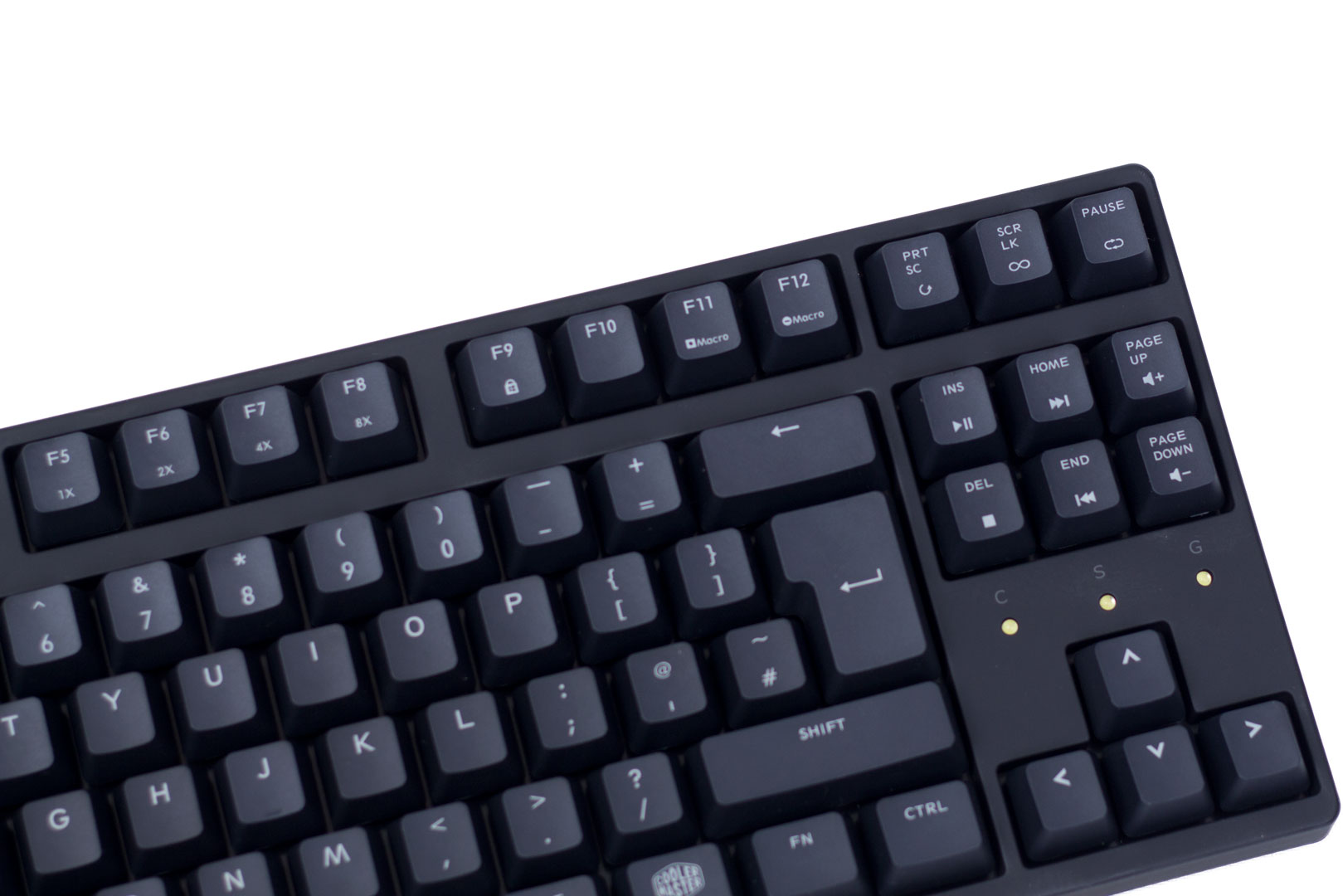 The Cooler Master MasterKeys PBT series works with Windows, Mac, and Linux, and you can change the layout to suit each OS by using FN, CTRL, and W, M, or L respectively. Still pandering to the enthusiast market, you can also switch between QWERTY, DVORAK, and Workman layouts with FN, CTRL, and Q, D, or W. FN with F5–F8 control repeat rate, and FN and F9 locks your Windows key.

There is also a full set of media controls as well as some basic macro functions. The media controls work great, but we would have liked to see a little bit more from the macro keys. There will always be limited options with hardware-based macros, though, and this is something that is generally accepted.

Cooler Master has tried to do something a little different with the Cooler Master MasterKeys L/S PBT. PBT keycaps are nothing new; Ducky, Vortex, KBP, Deck, Mistel, and Keycool all have keyboards that have PBT caps, but these all have something in common: They are either very expensive, or they are hard to get hold of. They are also mainly enthusiast boards. This is obviously the target audience Cooler Master is aiming for. The keyboards are relatively cheap, and they are simple. They also have excellent keycaps, and paired with Cherry switches the keyboards really are very nice to use.

The keyboards are made out of quality materials and have a sturdy feel to them; they don’t flex or bend at all. The macro functions don’t really add anything to the keyboard, and they are not something we would rely on, but they are there if you want them. The extra keycaps seem to be there to still make sure there is one foot in the 'gamers' market, but again, they are not really needed.

Personally, I spend hundreds on keyboards, and the Cooler Master MasterKeys S PBT feels just as good as some of the ones I own that are three times the price. £80 for Cherry Greens and PBT keycaps is a great deal.

If you are after RGB lighting, the ability to create complicated macros, or even looking for the ultimate game-enhancing keyboard, there are far better keyboards on the market, even from Cooler Master itself. If you want a keyboard that's simple, sturdy, has excellent switches complemented with great keycaps, then you can’t go far wrong with the Cooler Master MasterKeys PBT series. If there was the option for a 60 percent version of this board, I think Cooler Master would win over a lot of keyboard enthusiasts. 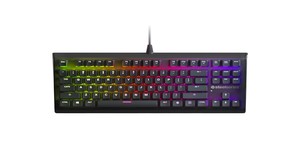 Same features as the full-size variant. 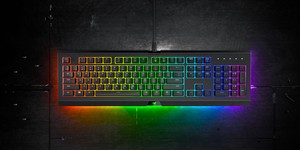