It's relatively common for manufacturers to release different variants of the same headset e.g. a stereo version, USB one and a wireless one. Cooler Master is doing just that with its new MasterPulse over-ear range of headsets. We've already seen the stereo version and with us today is the costlier but more feature-rich USB edition, the MasterPulse Pro, to be followed by the wireless MasterPulse Maker in the new year.

With the same design as the original MasterPulse, the MasterPulse Pro is off to a good start. Build quality of the headset is very good thanks to its aluminium frame and it simply feels solid all round. Click to enlarge
The headset uses a suspended headband design so height adjustment is automatic. The five individual cushions on the headband mean you hardly feel it, although much of the 332g weight (excluding cable) is transferred to the earcups, which clasp your head rather tightly – perhaps a little too tight for some. Coupled with the faux leather covering of the foam, this results in things getting pretty toasty during long sessions. Thankfully, there's loads of padding around your ears and the MasterPulse Pro ranks highly on comfort overall. Click to enlarge
Another feature carried over is Bass FX, whereby the backs of the earcups are magnetically attached and, when removed, trigger an enhanced and more powerful bass response. It's a neat mechanism that's dead simple to activate, although we found realigning the plates with the headset a little fussy with it still on our head.

You also get the microphone that's embedded in the left earcup. As before, recording quality is decent enough but your voice can sound a bit distant and background noise isn't really reduced at all – its primary advantage is being hidden. Click to enlarge
The main change with the Pro headset is the move from a stereo to a USB interface, so mobile compatibility is off the cards. There's a 2m anti-tangle cable and a larger in-line remote. This houses the headset's built-in soundcard and is responsible for controlling all the new features: RGB lighting, 7.1 virtual surround sound and onboard EQ adjustments. As such, it's a shame that it's so poorly designed. For starters, its plastic construction simply feels too cheap for the price range Cooler Master is targeting.

However, the main concern is how unintuitive it is. The microphone muting and virtual surround sound are controlled with tiny sliders, but only the latter has visual feedback and, oddly, the light is built into the larger front-facing button which actually controls the colour of the RGB lighting that illuminates the Cooler Master logo on each earcup. This button is shoddy too – we had to press it harder than the point where it clicked to get it to work. On the opposite side to the sliders, a pair of small, flimsy buttons are used for volume control and a final button toggles the EQ between its Music, Movie, Gaming and Off settings. Click to enlarge
With all these buttons and sliders, you'd hope they'd at least be clearly marked, but they're not. Instead, there are tiny printed symbols on the back of the unit – useless if you've used the clip to attach it to your clothing. The end result is it takes a lot of getting used to, and any time you want to change a setting you're probably going to have to have a bit of a fiddle. Even when gripping the remote to use one of the sliders you might accidentally hit one of the buttons on the opposite side.

There's no software for the headset at present, although Cooler Master says it will be released in November. Still, we'd much rather the headset offered adequate hardware controls.

There is more than enough volume on tap here and we found 20-30 percent to be the most comfortable listening volume – go too high and you'll be rewarded with pain and distortion. Still, at normal levels sound from the 44mm drivers is reasonable enough and like it's predecessor this is a good all-rounder, although mids and highs are noticeably clearer on the HyperX Cloud, for example. The first EQ setting, Music, did give the headset a welcome boost to details at the high end and our test tracks sounded more dynamic – this is a preset that seems well suited to the headset. However, the second setting, Movie, just made most elements sound muffled, while the third, Gaming, didn't sound too dissimilar from the first. Click to enlarge
The 7.1 virtual surround sound setting works well enough when you have a surround sound source. While you won't be locating sound with pinpoint accuracy, you do get a deeper sense of immersion and range, which is about as much as you can hope for. Some elements we felt came through a little too amplified, but we're just being picky there. The BassFX feature is also decent enough at what it does – the effect tends to be a bit much for our liking in music, but in the appropriate game or film it provides a nice punch.

The MasterPulse Pro is effectively a £25 upgrade to the original headset that adds in RGB lighting to the earcups, virtual 7.1 surround sound and EQ control. Being a powered headset, the MasterPulse Pro is also able to go louder than its analogue counterpart. Of the upgrades, only the virtual surround sound has true merit and effectiveness – sure, the RGB lighting is nice, but we can live without it, and the EQ control, while potentially beneficial, isn't really game-changing. Given this, plus the numerous issues we have with the in-line remote that actually controls all of these upgrades, the MasterPulse Pro is a tough sell, particularly with the HyperX Cloud II still on the market for £10 less. That said, if the MasterPulse appeals to you more aesthetically, we still stand by our recommendation of its stereo sibling, provided you can live without backlit earcups. 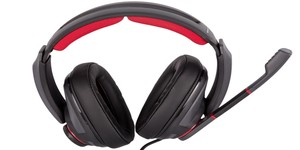