At the start of August this year, Corsair launched a trio of new headsets. The short-lived Corsair Gaming brand and its logo are no more, with Corsair having moved to a reunified structure and a modernised version of its three sails logo for all products at the start of June, though a separate gaming-specific microsite is still maintained. The previous line of headsets had been refreshes of the Vengeance line that came before it, but the Void headsets are a new creation designed in-house with the help of the BMW DesignWorks team. As it has done in the past, Corsair offers the Void in three flavours: a regular stereo one, a wired USB model and a top-of-the-line wireless one. The Corsair Void Stereo is the one we're scrutinising today, and it starts at around £60. This is a decent price, but does put it in competition with the Qpad QH-90 and Kingston HyperX Cloud (as well as the slightly more expensive HyperX Cloud II), which is a tough position for any headset to be in given the quality of said models. Click to enlarge
The Void Stereo has no soundcard of its own and connects using standard 3.5mm jacks. The captive cable ends in a 4-pole jack for use with notebooks, mobile devices and consoles (though the Xbox One requires a separate adaptor), but a short splitter is provided for traditional PC users with separate headphone and microphone jacks. That's it on the accessory front, however – there's no aeroplane adaptor, replacement earcups or carry case, for example.

There's a fair bit of plastic on the outside but at its core is an aluminium chassis. This is a great material for a headset as it's both sturdy and light. The Void Stereo is certainly robust, and while it's still a little bulky it's lighter than it looks. We're not enamoured by the glossy sections on the earcups, and the yellow and black colour scheme is likely to divide opinion too but it's very subtle. One last thing worth mentioning about the design is that the earcups can fold inwards allowing the Void Stereo to be flat packed for easier transporting. Click to enlarge
The earcups themselves are circumaural and we found they surrounded our ears well without pressing on them. Both these and the headband have a generous application of microfibre wrapped foam. There's also a good amount of height extension and the earcups adjust well to the shape of your head. Pressure is evenly distributed, so in the end the Void is comfortable to wear, and the material is breathable too so your ears don't warm up as much as they would with leather-coated earcups. We still don't think it's on par with what the Qpad and Kingston headsets achieve, but the Void is still solid in this regard, and caters better for larger ears.

The uni-directional microphone is fixed to the left earcup and is easily folded up and down. The default position we found to be fine – it's not especially open to changing position but it can be achieved with force. There were no issues with clarity and it does an admirable job of minimising background noise. Click to enlarge
The Void Stereo is not equipped with in-line controls; instead, they've been relocated to the left earcup. There's an easy access volume wheel on the underside as well as a big microphone mute button on the side. Both are fairly easy to locate in a hurry compared to fiddling for a tiny in-line remote, and while the microphone button stays depressed to indicate it's in mute mode, it's still not easy to tell and there's no other indicator (besides your friends ignoring everything you say). Mobile users will note that there are no buttons for answering calls or changing tracks, although the design of the headset is more of a sit-down-and-game one than it is an on-the-go one.

All that's left then is to discuss the sound quality produced by the 50mm neodymium drivers. The good news is that the sound doesn't distort at maximum volume, though that maximum isn't very high. In music, vocal elements are strong, and the Void Stereo has a bass-heavy soundscape like many gaming headsets. It's not overdone, but it can detract from elements of the mid-range, which is otherwise well represented but lacking a little in dynamics – sounds don't jump out at you. Similarly, the response at the high end is flat and subdued, at least compared to the Qpad and Kingston headsets, where the notes here are clear, detailed and sharp. Click to enlarge
While we can't recommend the Void Stereo for avid music listeners then, it's of course primarily a gaming headset, and for this it serves its purpose well enough. The bass helps to drive action and shooting scenes well, and vocal clarity is good for dialogue too. Still though, there are some finer details lost at the high end and the headset doesn't always immerse you as well as others.

The design of the Void is very much an improvement on Corsair's preceding headset families – the aluminium shell makes them nice and sturdy and they're very comfortable to wear. At £60, the pricing is also decent, but it doesn't help Corsair (or any other manufacturer, for that matter) that the Qpad QH-90 and the Kingston headsets based off of that model are so aggressively priced. They are just as comfortable, if not more so, supplied with more accessories and, most importantly, sound better. This is a solid offering from Corsair – there's nothing inherently wrong with the headset, but equally nothing about it leaps out and next to its competition it's thus hard to recommend. That said, if you'll strictly be using it for gaming and have a head and ears that are on the larger side, it's certainly worth a look. 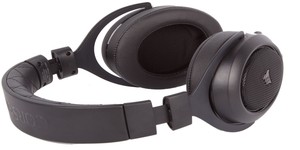