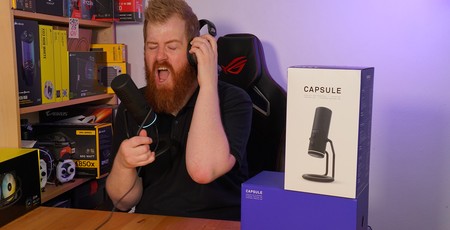 Andy takes you through an in-depth review of NZXT's Capsule microphone, released today.

Key times for the video are as follows:

NZXT took its audio offerings off the market in late 2019, after some quality concerns, but they’re now back and first up is the new Capsule USB microphone.

The first thing you notice about the Capsule is its weight. Tipping the scales at 883g it’s got the kind of heft that would make it a handy weapon come the zombie apocalypse. NZXT calls it ‘rugged’ in the press pack and it’s certainly that, with the paint thick and difficult to mark permanently .

Inside is a 25mm Cardioid condenser capsule, an inbuilt pop filter and shockmount, and it packs an impressive 24-bit/96kHz analogue-to-digital converter, although how much difference that will make once it’s been compressed a couple of times is hard to say.

Outside it has two dials; one for gain, which also doubles as the mute button, the second for volume control of the headphone-out passthrough. Around the lower end is an LED ring that’s white when live and red when muted.

The stand has a rubber base which offers a lot of grip and is where most of the weight is to be found, making it relatively difficult to push over. This has a quick-release button if you want to mount the mic via the 1/4in thread in the bottom, meaning no screws or washers to lose if you need to revert later.

NZXT also provides a 1/4in-to-3/8in for mounting it to a boom arm, one of which NZXT is also releasing today. On the same end as the thread is where you’ll find the headphone and USB-C port, with a handy, long 3m USB-A to USB-A cable provided.

The sound produced by the microphone is crisp and clear, with the gain offering a wide range of pre-amp so the software it’s being used with has as little work to do as possible. Compared to the mic on my now ancient original HyperX Cloud headset it’s an absolute world apart, but it took some convincing that it was better than my fairly budget clip-on Rode Lavalier I have for recording the videos. I’d got used to sounding how I do through that mic, it being relatively close to that bassier internal sound you get when you talk. My fiancée immediately declared the Capsule the winner though, saying it was truer to my actual voice. A win for NZXT here.

There’s very little to fault the Capsule on, if anything it’s the internal shockmount that couldn’t cope with some aggressive wiggling. It’s priced competitively for this level of microphone and NZXT’s usual pared-back, simplistic design will stand the test of time, as will, I’m sure, the build quality. What’s more there’s no software to get in the way.

• Simple design will fit in anywhere

• Shockmount may not smooth out the bigger bumps