Tesoro sent us its Excalibur SE Spectrum keyboard a short while back, and at the same time it popped this little headset into the package. The Tesoro Tuned In-Ear Pro headphones have been created to give the user ultimate portability.

Click to enlarge
We don't often show the boxes, but we liked how well these little headphones were packaged. The headphones sit snugly in the formed plastic insert and the cardboard box has a magnetic flap on it to keep it closed. It's a really nice, thick cardboard too; it sounds silly to say, but the packaging gives these headphones a really premium feel. If this theme is carried on throughout, we could have a rather nice set of headphones.

Click to enlarge
Inside the tasty packaging, we have the headphones with a four-pole 3.5mm jack, a Y-splitter cable, a quick start guide, and a very nice little carry case. There are also three sets of rubber ear buds: small, medium, and large. Click to enlarge
We have mentioned carry cases and bags a lot in our peripheral reviews recently, especially with items that are meant to be portable. This is for a good reason; items get damaged when being carried around a lot. We attend many LANs and travel to events around the world, and it gives the hardware a lot of wear and tear. A little carry case like this can save your hard-earned products from being destroyed. The case itself is very simple; it has a hard, rubbery shell with a zip to access the softer material inside.

Click to enlarge
The carry case can hold everything that's included inside the box. The little netting area holds the Y-splitter cable as well as the spare earbuds. The main compartment can hold the headphones easily.

Click to enlarge
The headphones themselves are made from metal yet are still light enough to stay in your ears. Each one is angled to fit inside the ear in a comfortable way and to fit around the contours of your earlobe.

Click to enlarge
Both of the headphones have a magnetic ring in the back of them which allows them to stick together. This is meant to help prevent the earphones from tangling, but as with any cable, they still tangled plenty. One way I made use of this feature, though, was by sticking them together around the back of my neck when I wasn't using the headphones. I don't like having my headphones in when talking to cashiers at the supermarkets, for example. If I just pull the earbuds out, they tend to fall down my t-shirt and I have to sort everything out again. With these, I stuck them together behind my head and then just grabbed the wires on either side of my neck when I had finished. It's something I got used to doing very quickly, and it was very useful to me.

Click to enlarge
There are some in-line controls with the Tesoro Tuned In-Ear Pro. These can be used with your mobile phone to pause, play, or change tracks. You can also use it for volume up and down as well as for answering calls. This in-line remote is situated on the left-hand earphone wire. The wire for this headset is flattened, again to help to stop tangling. The wire is 1.2 metres long without the Y-splitter, so it should be long enough for your daily needs. The in-line controller also doubles up as a microphone which is of an acceptable quality. If there is any background noise, such as a loud air-conditioning unit, your voice does get muffled. We used the microphone with Teamspeak, Discord, and on mobile calls, and there were no real complaints.

Click to enlarge
Speaking of the Y-splitter, this cable, which is also flat, allows you to use your headset with devices that require three-pole 3.5mm jacks, such as laptops or PCs. This also adds another 1.2 meters to your cable length so that it can reach behind your computer comfortably.

Click to enlarge
As already mentioned, there are three different sizes of ear bud that you can use with the Tesoro Tuned In-Ear Pro. These are the standard rubber types which are acceptable. The sizes allow the headset to fit comfortably in the majority of ears, and with them being an industry standard, you'd be able to use after-market buds if you wanted to.

We don't get to review in-ear headphones often, and it is quite refreshing when a set crosses our paths. I personally like them for transportability, but I am quite fussy. I find most are either too heavy or too large. The Tesoro Tuned In-Ear Pro headphones were fine for me, although I did have to adjust them every now and again, as I have to with all in-ear headphones.

The sound quality of these is very surprising. As this is a gaming headset, we were expecting an abundance of bass and very little else. This isn't the case, however; they are actually quite level across the board. We used the Tesoro Tuned In-Ear Pro headphones with CS: GO, Overwatch, and Dungeons II, and in all of the games sound was clear and concise. We could hear enemies well and items such as flash bangs and grenades sounded great. The treble and mids were clear, and the bass didn't muddy anything up. The microphone could be better, but this would drive the price up. For me personally, the microphone worked well enough and people could hear me.

When using the headset to listen to music or watch a film, it was dependent on the music as to how the headset sounded. I found that with most of my music it was great: clear, crisp, and the bass wasn't overpowering. However, when I listened to anything where I wanted a lot of bass, I found it a bit lacking.

The quality of the materials seems high, and the metal earphones with the magnetic rings and the flat cables make it a nice headset to hold and use. The little touches like the premium packaging and the little carry case really do add a sense of quality to the product also. As I would use these on the go more than anything, I don't expect the same quality as my setup at home which costs 10 times as much. The ability to use these with my mobile phone puts another string in this headsets's bow, and for the price, there are no complaints.

Overall, the Tesoro Tuned In-Ear Pro headphones surprised us; the sound quality is great for an in-ear gaming headset, and the price is very reasonable too. We have no reason not to give these our top award! 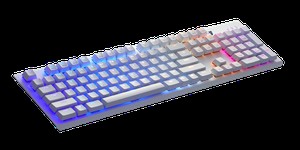 If you travel with your gaming headset, maybe the Megara is for you.