The Stealth 450 has a number of onboard controls, all located on the right earcup for convenience. First is a standard volume wheel, but there's a second wheel which controls the integrated mic monitoring, which allows you to monitor how loud you're talking through the headphones. A preset button cycles through the four audio presets (natural, bass boost, bass and treble boost and vocal boost), and there's a mic mute button up front too. One feature we really like is the set of voice prompts that announce the presets as you switch to them. They also tell you when the microphone is being switched on or off and warn you when the headset is about to auto-shutdown after a period of no sound. Click to enlarge
Turtle Beach has definitely improved its audio quality since the Z60, as overall the sound pumped out by the 50mm neodymium drivers is great. The Stealth 450 goes pretty loud without distorting and doesn't have overpowering bass like many cheaper gaming headsets. Of course, these aren't audiophile headphones, but mids come through clearly, even in more distorted tracks, while highs are crisp too albeit without having as much detail as the Qpad QH-90 or Kingston HyperX Cloud headsets. Bass gives music a solid foundation and reaches low, sub frequencies too without sounding like a wet fart.

The balance of the elements is also well handled, with no one part of the spectrum sounding too over or under-represented; sound quality is an area where Turtle Beach has the Corsair H2100 trumped. The bass boost preset gives things a bit more punch, but again without overdoing it, and while we weren't fans of the other two boost presets they do achieve what they claim to. Click to enlarge
The detachable microphone plugs into the left earcup. It's highly flexible and stays in position once adjusted. The quality of recorded voice is also very good, and while it doesn't actively block background noise, your voice will easily be audible over loud background noise like music or typing provided you have it facing the right way.

To access the Stealth 450's full feature set, you'll need to download the surround sound driver, which simply adds a custom tab to the Properties section of the headset in Windows. Here you can activate the Dolby DTS Headphone:X virtual 7.1 surround, which has three presets (game, movies and music). Annoyingly, you have to dive into this settings tab to change these settings every time, but audibly our experience with the technology was the same as with the Z60. Namely, it's the best virtual surround solution we've heard – games and movies have noticeable improvements in audio position, though with music the experience is inconsistent and we found ourselves switching back to stereo quite quickly. Click to enlarge
The software lets you also trigger Turtle Beach's Superhuman Hearing, designed to make footsteps and the like more audible in games for a tactical advantage. It's definitely aimed at pros and more competitive types, as the focus on higher end sounds and lowering of bass and much of the mid-range too noticeably degrades the audio experience in game. One thing we do like about it is that you can set a keyboard hotkey to toggle the feature – it's a shame the same isn't true of the surround sound.

We said at the start of the review that the Ear Force Stealth 450 appears to offer good value for money, and after a good few days of testing this has held true for the most part. The key feature, of course, is the wireless connectivity, which works flawlessly and there's plenty of battery life too. Audio quality is also solid across a variety of entertainment and the onboard controls are easy to work with, especially with the voice prompts. Throw in the decent virtual surround sound and mobile compatibility as little bonuses and you've got a pretty decent headset. There's not much competition in wireless headsets, especially under £100, but at that price the Stealth 450 is right on the money. 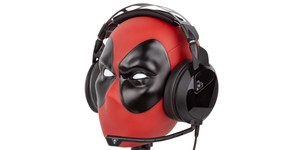 How does the new HyperX headset stack up against the competition?