The other side of the coin

On the contrary, Michael Arrington says not to worry "about those desktop apps you think you need." He believes that "you won't miss Office" because Zoho and Google Apps will take up the slack. We're not convinced though because telling a business that it can't use Microsoft Office any more is like telling the Cookie Monster that there are no more cookies.

As a result of its radical approach, Chrome OS isn't going to replace Windows on every PC and it's not really a threat to Microsoft even though some really believe it is. Microsoft's major revenue comes from its business customers and Chrome OS is unlikely to unseat Microsoft in this market.

At face value, what we're looking at is an OS with incredibly limited functions that will be perfect for netbooks - and little else, frankly. And even then, the current crop of netbooks might offer too much hardware for Chrome OS because they've been marketed as mini-notebooks by many manufacturers.

A new class of device is more likely the solution - something based around either Nvidia Tegra or the Qualcomm Snapdragon platform would be ideally suited in our opinion since Chrome OS runs on both x86 and ARM based CPUs. Google's web apps will form the basis of Chrome OS, but
are they good enough?

Nvidia, in particular, is working hard to deliver a cloud-based computing experience with Tegra-based 'smartbooks' and it's looking to mobile network operators to bundle these new machines with a 3G data contract.

The original plan was for them to use Windows CE and as a result of Chrome OS, we're not convinced that we'll see those devices running CE for very long. One Nvidia exec in particular said to us that he'd love to see a version of Android (or similar) running on Tegra based machines, but that it needed to support higher resolution screens before it would be adopted. If Chrome OS lives up to the hype, it could be just what the doctor ordered and mobile operators will likely love it too because there'll be a minimal cost for software that the mobile operators have to swallow - the lower the cost per unit, the higher their profit margins.

Vendor support seems to be strong as well, with Acer, Adobe, Asus, Freescale, Hewlett Packard, Lenovo, Qualcomm, Texas Instruments and Toshiba all working with Google to support Chrome OS, but they're unlikely to dump Windows in favour of Google's operating system. "I can't imagine that any major [OEM] looks at Chrome OS as an opportunity to dump Windows - these Chrome netbooks will almost certainly be released as complements to Windows machines, not replacements," said Harry McCracken on Technologizer. Photoshop.com provides basic image editing capabilities online
And although Intel hasn't been named, the chip maker said that it has been working with Google on Chrome OS for some time. "We work with Google on a variety of projects, including elements of [Chrome OS]. We've been privy to the project for some time," said APAC spokesperson Nick Jacobs. 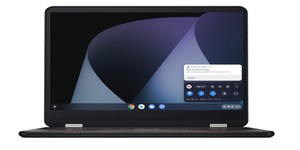