How Crusader Kings III Improves upon its predecessor. 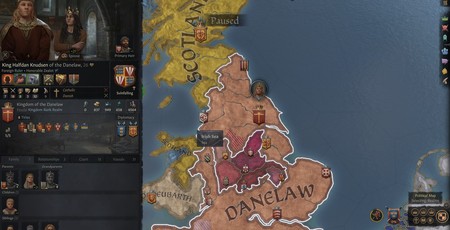 Due to a combination of moving house and being ill (mandatory disclaimer – not Coronavirus), I sadly haven’t enjoyed enough time with Crusader Kings III to give it a proper, official review. To be honest, I could spend a year with CK III and still not get a categorical overview of it, but even so, I’m not comfortable giving it an official verdict given the amount of time I’ve so far been able to invest.

That said, I also didn’t want to let it slip through autumn’s increasingly crammed schedule like a knife through a King’s spleen. I am confident that it’s a great game, one that improves upon CK II in all the right ways. Hence, I decided to give you a run-down of all the ways Crusader Kings III refines and elaborates upon the sterling work Paradox did in Crusader Kings II. It’s a lot easier to get started.

Crusader Kings III is by far the best teacher in Paradox’s grand strategy school. It offers a fully-fledged tutorial campaign which sees you play as a Petty King of Ireland, guiding you toward becoming the actual King of Ireland. In the process, it dutifully explains the basics of ruling both your domain and your dynasty. It covers how to interact with other characters, how to manage your faction council, how to declare war, how to raise and manage armies and how to embrace your inner bastard through the game’s scheme’s system.

I still wouldn’t describe Crusader Kings III as an “easy” game to comprehend. Its authentic representation of Medieval class system, and the nuanced definition of things like realms and domains, can make it challenging to figure out who owns what, who has what titles etc. Meanwhile, the UI, while much clearer than that seen in CK II, is still very complicated. It took me a while to figure out where certain information was displayed, such as the line of succession for each ruler’s position. Nonetheless, it’s a big improvement, making it much quicker to get through understanding Crusader Kings and start actually enjoying it. Characters are even more….er…characterful than before.

Crusader Kings III doubles down on its simulation of the inhabitants of the Medieval World. The rulers and the ruled, highborn and lowborn, heroes and villains. Not only are there a much broader range of personality traits that define your dynasty head’s character, but the game also encourages you to play “in character” via the introduction of Stress. This is a new mechanic whereby acting against your character’s inclinations increases their stress level. A character who is Just, for example, will accrue stress if they hatch a plot to murder someone. This doesn’t mean you *have* to follow their personality, of course. Acting out of character can be just as interesting.

Alongside more specific personalities, your dynasty heads also play more specialised roles. Upon gaining their title, each dynasty head chooses a “Life focus”, specialising in one of the game’s five main character attributes, namely Diplomacy, Martial, Stewardship, Intrigue, and Learning. Over time, they’ll gain experience in that area and unlock special abilities. For example, a character who focuses on his martial capabilities might fare better in battle, have higher than usual levies, or be able to resolve sieges faster. A character who focuses on Intrigue, meanwhile, will have an easier time blackmailing and murdering people, and unlock special schemes like the ability to abduct people from another dynasty.

Finally, Crusader Kings III is much better at representing the characters of its world. The static and somewhat corpse-like character portraits of II have been replaced with animated 3D models that change accordingly the progress of your character’s life. They display clear genetic similarities with other family members, show things like wounds gained in battle, and age as time passes. It makes them feel even more human than they did before, adding to the immersive qualities of the game’s medieval soap opera. War is more straightforward (to begin with, anyway).

I think one of the reasons CK II became so well known for its character politics is that fighting wars in that game was often tedious and confusing. CK III goes a lot way to rectifying this. To start with, it’s much easier to rally your levies. All you do is set your preferred rally point, after which the game will do the rest for you. It’s also easier to judge the likely outcome of wars before committing to them. It’s easy to find out the relative strengths of your armies, those of your opponent, and those of your allies, which means you can accurately judge the likelihood of victory or defeat.

Yet although war is easier to manage, strategically it’s more complex. Alongside your levies, your dynasty head can also recruit personal men at arms, which both bolster your numbers and provides unique bonuses. Equipping siege engines, for example, will make sieges resolve faster. Other factors like terrain can play a significant role, so defending a position in confers a substantial disadvantage to your army.

Ultimately, this means war is less convoluted but more nuanced, letting you spend more time thinking about how you can beat your enemy through tactics and planning, and less time on the logistics of getting your forces together in the first place. There are more ways to be a sneaky sausage.

Subterfuge has been overhauled for CK III, opening it up in some interesting ways. CK III replaces the “Plots” system of the previous game with the more elaborate “Schemes”. These include familiar features like the ability to orchestrate murders, but also includes more “positive” schemes like attempting to sway someone to like you more, as well as “Romancing” AND “Seducing” people (yes, those are two different things).

Alongside this is a whole new system known as Hooks. Hooks can be gained in various ways. You might acquire hooks on some characters by default, such as your own children, or through ransoming a captured noble. But the most common way of gaining hooks is through blackmail, tasking your Spymaster to go out and dig up dirt on another character. In this way, you might discover that one of your earls is having an extramarital affair, or that the heir to his title is not actually his child. You can then lean on that character with this information, and if successful, you’ll gain either a weak or strong hook on that character.

You could use hooks in various ways, such as altering your feudal contract with them to your advantage, or to dissuade them from rising up against you. Hooks are a great way to consolidate your power without touching your sword, although it’s worth remembering that you’re just as vulnerable to hooks as anyone else. Crusader Kings isn’t so much about playing a faction as it is a family. Each ruler of your dynasty is only there temporarily, and their primary life goal is to give the next dynasty head the best start they can.

Crusader Kings III elaborates on this in some excellent ways. Some personality traits, for example, are congenital, meaning they can be passed down the family tree. By marrying your dynasty heads to people with the right genetic makeup, you can game this system so that your rulers have strong physical constitutions, stable mental states, and temperate emotions. You can also create a feeble, irrational, narcissistic human train-wreck if you want to, playing the game like a mad medieval scientist aiming to create the worst human imaginable.

The other way to play the long game is through legacies. These are permanent upgrades that your whole dynasty benefits from, giving it significant bonuses in areas like martial prowess or subterfuge. Legacy upgrades are expensive, though, costing a lot of renown that rulers could otherwise spend on day-to-day political machinations, so you need to decide whether you’re best off expanding your current realm or investing in the future of your family.