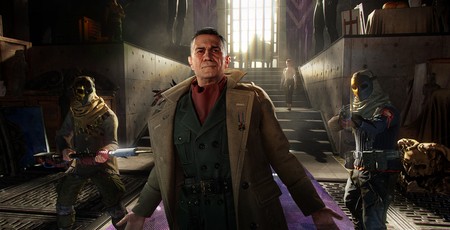 Continuing our exploration of the coming year’s gaming highlights. Don't forget to read part one here. Between Legion, Bloodlines 2, and possibly Cyberpunk as well, “Open world games with highly dynamic narratives” seems to be the theme of 2020. Dying Light 2 proudly throws itself into category, likely from a nearby rooftop Dying Light 2 aims to take the framework of the original – namely the surprisingly great blend of free-running and zombie bashing, then couples it to a truly fascinating storytelling system.

Rather than narrative-branches, Dying Light 2’s zombie-ridden city is built around a kind of storytelling matrix. Each area of its openly explorable city can be occupied by one of the game’s various human factions. Your actions and choices in the game can basically affect who controls those blocks. At the same time, there are higher level narrative choices that have broader consequences for the city as a whole, such as whether there’s easy access to water or not. These can also affect the factional arrangement of the city, with some factions dominating while others can be destroyed entirely.

Combine this with more refined free-running, more advanced melee combat, and an interesting new ecosystem in which zombies evolve under specific conditions, and Dying Light 2 seems set to be one of the most interesting games this year. Hideo Kojima’s magnum-opus/utterly bonkers vanity project launched on PS4 last year, but it won’t be hitting the PC until the summer. It sees players assume the role of Sam, a sort-of courier in the post-apocalypse who must deliver resources to the scattered remnants of civilisation, and help reconnect them to a communication system known as the Chiral Network.

Death Stranding was one of the most controversial releases of last year. Some players its vast length (60+) hours combined with mechanics that involve long, frequently non-event periods of terrain traversal, to be painfully tedious, while others praised the way you gradually establish your own transportation network, helped in part by other player via the game’s asynchronous multiplayer component. Most people seemed to agree that the story was hot nonsense, however.

As a big fan of Metal Gear Solid V, I am intrigued to see how Kojima approaches a largely non-violent style of game (although DS does have some combat in it). We’ll find out when it lands in the middle of the year. Having recently played the demo of Night-dive’s System Shock remake, I’m not going to spend a huge amount of words delving into this. But safe to say, it’s looking fantastic. Visually the game massively updates the 26-year-old original, rejuvenating the dark, terrifying atmosphere of Citadel station without compromising the art-direction. It also modernises the UI, improves the combat, and lends the world a wonderfully tactical sense of interaction. It also features some of the best sci-fi doors I’ve ever seen in a game. I can’t wait for the final version, which is scheduled to launch in the first quarter of this year. On the subject of remakes, another ambitious remodelling of a classic game is Oddworld: Soulstorm. If that is, it can be called a remake at all. Following on from 2014’s Oddworld: New ‘n’ Tasty, Soulstorm is notionally a remake of Oddworld: Abe’s Exoddus. Whereas the former was a straight up remake of the original game, Soulstorm is a complete rethinking of Exoddus, not just in terms of visuals, but mechanics and structure as well.

For a start, 3D plays a much greater role in Soulstorm. You’re still for the most part moving along a 2D plane, but the levels twist and turn in such a way that you’re able to look at areas in the distance and plan how you’re going to get there. Soulstorm also has a much faster pace than those early Oddworld games, giving the game the feel of a more modern platformer.

Soulstorm also massively expands the abilities of Abe and his Mudokon buddies. It introduces a crafting system with which you can build weapons and equipment for your followers. Abe can then order those followers to stand in certain places and perform specific actions, letting you create elaborate solutions to puzzles in a way that curiously evokes Lemmings.

It all looks very unusual and intriguing. Whether it’ll pay off for creator Lorne Lanning and his team, we’ll find out later in the year. Crusader Kings II is one of my favourite strategy games, a massive strategic sandbox where personal relationships are as important as armies and diplomatic treaties. It was essentially an RPG hiding inside a strategy game, and it was weird, tragic, hilarious, sometimes all three at the same time.

Crusader Kings 3 aims to expand both the RPG and strategy elements. On the RPG side, the head of your medieval dynasty now has a proper skill tree which you will explore across the course of their reign. This enables you to tailor both your leader and your dynasty to a specific playstyle, for example, making your leader a mighty warrior and your dynasty warlike. You also don’t have to be nice to everyone in Crusader Kings 3, your dynasty leader can lead through fear and intimidation, giving them a unique “Dread” trait that terrifies all but your bravest peers into doing your bidding.

Of course, this could all blow up your face if your leader dies and leaves behind an heir who is a snivelling weakling. In this instance, a rival member of your dynasty might decide to split off and form their own House, possibly even trying to take your place as head of the dynasty. You can of course, try to avoid this by marrying to the right blood, ensuring your heir has the best chance to be biologically similar to you.

On the strategic side, Crusader Kings 3 lets you lay siege to castles with siege weapons, while battles are governed much more by the terrain in a particular province, whether it includes mountains or a river, for example. This will provide an advantage bonus to one side, meaning that battles are no longer straightforward contents of who has got the best/most soldiers.

Add to that a massive map that includes everything from Crusader Kings 2, plus a whole more detail on towns, cities, terrain, and you’ve got what could be the strategy highlight of 2020. Mount and Blade is one of those games that’s like air, or a leg. It always there, you don’t pay much attention to it, but boy would things be different if it wasn’t around. It’s a fantastically open-ended medieval role-playing game, where you start out as a lone drifter with no name, money or reputation, but over time you can build yourself an army, and make yourself a bandit, a general, or a King.

Mount and Blade II has two goals, to make the experience better-looking and more refined, and to deepen the roleplaying potential over the original. Hence, Mount and Blade II runs on a new engine that, while not exactly state-of-the-art, looks pretty snazzy when you’ve got a big army rolling across the countryside.

Alongside this are a much broader range of ways to play and interact with the world. You can start your own enterprise, for example, opening up several businesses such as breweries and tanneries. You can get married and have children who become your heirs, and take over as the main character if your original character dies. Performing quest and deeds will earn you fame, which acts as a political currency that you can use to influence factions. Characters level up and earn skills as they gain experience, and you can recruit companions to cover for any gaps in your abilities.

In short, Mount and Blade II aims to be a fully-fledge medieval world sim, letting you approach your game however you please. We can’t wait to see the final version. Like Jimmy the Fish, that infamous gangster I made up purely for this comparison, Empire of Sin is a hard game to pin down. Basically, you’re a small-time gang boss in prohibition-era Chicago, and your job is to create a bootlegging empire through whatever means you feel are necessary.

You can gun-down the competition in X-COM like combat, bribe the police to crack down on your rivals, or simply “convince” them to join your growing Empire. Whether you choose to rule through blood or negotiation, that will have an impact on how other factions view you. They’ll remember every slight against them, and every trick you can pull, they can pull too.

Helping you build your empire are up to 16 henchmen recruited from a shared pool of 60 unique characters. These characters will interrelate with others both within your gang and with other gangs, some of whom they may already have worked for, and, unless you keep them sweet, may have worked for again.

It all sounds like a delightful organic blend of strategy and management, a hybrid of turn-based strategy and real-time city-management, with a hefty dose of Crusader Kings-like bastardry thrown in. From the trailer which debuted at ParadoxCon last year, the game already style to spare. If the substance matches up, Empire of Sin could be something special.