An ambitious modder is aiming to recreate classic free-moving-shooter Descent in Unreal Engine 3.

The project, working title Descent to UDK, has already shown progress and modder Max states he has already plugged in the movement controls, projectiles, spawn points and basic robot AI for two types of drones.

The scope of the remake will include the original story, the original levels, remodled and animated robots with advanced AI and a high-detailed ship model with a 3D cockpit view. He is also considering developing new weapons to sit alongside the set from the original.

On the mod's site, Max stresses that the project has only just started and has offered to open it up as a community project, asking for any fellow Descent fans to contact him if they want to contribute. He has already had a significant response.

'Just a few hours after publishing this website, I have received more mail and YouTube comments than I could ever imagine,' said Max. 'It will definitely be a big drive to continue.'

The original Descent was developed by Parallax Software and published by Interplay in 1994. It received two sequels and various entries of the series were ported onto the Playstation and N64.

Interplay still owns the Descent trademark and back in 2010 announced there was a version heading to Wiiware. 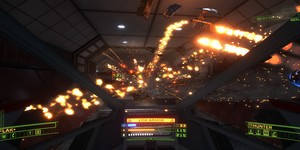 The spiritual successor to Descent is a fantastic shooter in its own right.