Taiwanese case-maker Aerocool has unveiled its latest creation: a tubular do-it-yourself chassis kit dubbed the Dream Box DIY, which it claims represents an ideal structural design bundle for a variety of projects.

Compared to traditional cases, the Aerocool Dream Box DIY is certainly eye-catching: the bundle is sold entirely flat, as a selection of aluminium pipes, connectors, C-ring mounts, and trays for the motherboard, power supply, and an IO panel which you can mount at the front for easy access or anywhere else - even internally - if you like a challenge. There are no side panels: the framework leaves the components entirely exposed, and while Aerocool suggests the 118-part kit is capable of building three designs of PC chassis out-of-the-box the precise details of the design will be left up to the assembler.

As well as positioning it for PC use, Aerocool is dipping its toes into the maker market by suggesting that the same kit, minus the PC-specific components, can be used to provide structure in a variety of projects: 'tables, lamps, cup holders, or even all kinds of toys and useful gadgets,' the company's announcement suggests - and, naturally, if you find the 118 pieces insufficient for your build, the company would be only too happy to sell you multiple packages.

The tubular design of the aluminium framework and the use of fixing screws at all connection joints, Aerocool claims, makes for a robust creation. Whether that will be enough to tempt people away from traditional cases or existing beam-based construction systems such as OpenBeam remains to be seen.

More information on the Dream Box DIY kit, including an introductory assembly video, is available from the official website. Pricing has been set at €134.90 per kit. 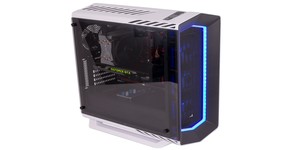 With an eye-catching design, a bundled RGB control hub, and a tempered glass panel, is the £110 P7-C1 Pro a solid purchase?