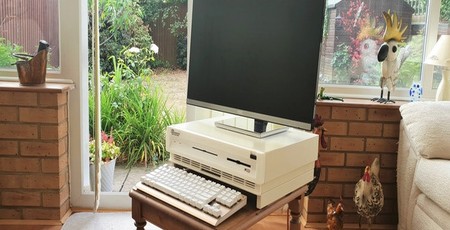 A classic of the 16-bit computing era is coming back, with Stephen Jones announcing a new edition of his classic Checkmate A1500 chassis for both classic Amiga and modern IBM-compatible hardware.

Launched in 1989, the Checkmate A1500 was designed for owners of the low-cost built-in-keyboard Amiga 500 who felt envious of their friends with Amiga A1000 and Amiga A2000 desktops and their separate keyboards. Taking the insides of an Amiga A500, the Checkmate A1500 Plus converted the system into a metal-housed desktop device designed to provide both more room for expansion and a place to rest your monitor. It also caused more than a few headaches for creator Stephen Jones when Commodore, allegedly unimpressed with the idea that buyers could pick up a cheaper A500 and convert it into something closer to the far more expensive A2000, released an Amiga A1500 model exclusively into the UK market.

With the sad demise of both Commodore and its Amiga, Jones' creation has all-but been forgotten - but that's something he's looking to correct with the launch of a crowdfunding campaign to produce a modern equivalent.

Dubbed the Checkmate A1500 Plus, the new design takes the original A1500 concept, polishes it up a bit with some design elements lovingly borrowed from the newer Commodore A3000 systems, and ends up with a convertible desktop case suitable for both classic and modern hardware. In its standard guise, Jones explains, the case will take anything from Amiga A500, A600, and A1200 motherboards - complete with optional external housing for the original keyboard - with or without accelerator hardware and other add-ons to a modern mini-ITX or micro-ATX PC motherboard and blower-style discrete graphics card. The only difference: the cut-outs in the back panel.

As well as the optional external keyboard case for those re-using A500 or A1200 internal keyboards, Jones' design includes optional 'keyboard risers' - a feature of the original A1500 - which allow the external keyboard to be slotted under the desktop chassis when not in use. The Amiga variant includes one solid and one floppy-drive blanking plate for its two front-facing expansion slots, while the IBM-compatible variant comes with two solid plates with an optional 3.5" plate - and, should a stretch goal be hit, the option of a slot-loading optical drive plate.

Jones has already raised nearly £25,000 of his £77,500 goal to fund production, with pricing set at £159 plus shipping for the Amiga or IBM-compatible case variants in Amiga-style white or modern black. Additional rear panels - available for IBM-compatible builds with vertically-oriented low-profile or horizontally-oriented full-profile add-in cards, and Amiga A1200/A600 and Amiga A500 motherboards - are available for £25 extra and the keyboard risers for £15 the pair, while additional front panels are £5 extra. Should the stretch goal for injection moulding of the slot-loading DVD panel not be reached, Jones has promised to release 3D design files for home or commercial printing. Pricing for the keyboard case has not been confirmed.

More information is available on the Kickstarter campaign page.

The eight-bit Commodore 64 - the most popular computer in history - turns 30 today. Commodore USA has launched the Amiga Mini, which owes more to Apple than its namesake.