Founded with no lesser aim than being a total repository for information both analogue and digital, the Internet Archive is a fascinating project. Despite some setbacks and commercial competition, the Internet Archive - best known for the Wayback Machine, which allows you to browse a decades-deep cache of popular websites by date - has been going from strength to strength.

Following the release of the Historical Software Archive in 2013, the Internet Archive has been expanding its offering of software which can be executed directly within a visitor's web browser: in 2014 arcade games were added, and in February this year visitors could experience sanitised malware. Now, the project's software library has extended to cover a new format: the Amiga.

The Amiga Software Library covers a total of 10,351 software packages at the time of writing, ranging from commercial games to demoscene entries and including classics such as Psygnosis' Lemmings, Taito's Bubble Bobble, and Ocean's Wizball, along with Frontier Development's Frontier: Elite II, the precursor to Elite: Dangerous. Other highlights include the Deluxe Paint franchise from Electronic Arts, one of the most popular bitmap illustration programs of its era and still fondly remembered, alongside the era-impressive Juggler demo.

All titles are available to play in-browser now on the official collection page, and can also be downloaded as ADF floppy disk images for use in an offline emulator - or even for writing to disk and running on a genuine Amiga. 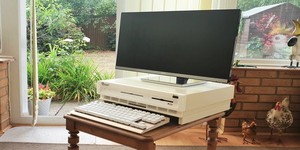