AMD has announced that it is to produce ARM-based processors for the server market, using its SeaMicro subsidiary to create hybrid systems combining the flexibility of the x86 instruction set with the high performance-per-watt of ARM chips.

Announced at an event in the US last night, the deal will see AMD become an ARM licensee for the first time with a deal to produce chips based around a 64-bit implementation of ARMv8, based on the ARMv7A instruction set architecture found in the Cortex-A15 'Eagle' IP but replacing the 32-bit-with-48-bit-addressing model with a true 64-bit implementation. Sold under the Opteron brand, the ARM chips will find a home in SeaMicro's microservers, using the Freedom supercomputer fabric interconnect to combine thousands of processor clusters into low-power high-performance systems.

The project has been in the works for a while now, with AMD quietly picking up a licence for the 64-bit ARMv8 architecture last year and working on the project in secret alongside the Cambridge-based semiconductor design giant. While the company has teased 'a variety of different products,' AMD has yet to come out and state whether or not it plans to produce consumer-oriented ARM chips in order to take on graphics rival Nvidia's Tegra system-on-chip (SoC) family.

'AMD led the datacentre transition to mainstream 64-bit computing with AMD64, and with our ambidextrous strategy we will again lead the next major industry inflection point by driving the widespread adoption of energy-efficient 64-bit server processors based on both the x86 and ARM architectures,' claimed Rory Read, president and chief executive officer of AMD, at the announcement. 'Through our collaboration with ARM, we are building on AMD’s rich IP portfolio, including our deep 64-bit processor knowledge and industry-leading AMD SeaMicro Freedom supercompute fabric, to offer the most flexible and complete processing solutions for the modern datacentre.'

Full details of the deal have yet to be released, but already the industry is coming out in support of AMD's partnership with ARM. Both Dell and HP have pledged their support for AMD's Opteron-branded ARM chips, with the latter going as far as to promise products based around the system. Linux giant Red Hat has also pledged its support, with the company's chief ARM architect Jon Masters promising to add Opteron ARM support to future revisions of the community-powered Fedora distribution.

The news will come as a blow for Intel, which is already showing signs of distress over the increasing success of ARM's ever-more-powerful chip designs. With Intel having long since given up its own ARM licence - obtained as part of its acquisition of parts of Digital Equipment Corporation in 2002 - AMD is uniquely positioned as the only major datacentre-focused semiconductor company to offer an ARM chip. Should the design gain traction, it could put real pressure on Intel's lucrative server market share.

For now, however, Intel has a while before it has to start worrying: AMD has no plans to release the Opteron ARM chips before 2014. 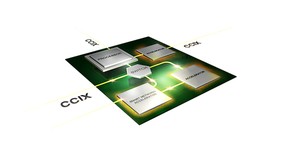 Long time ARM CEO Warren East is to step down on 1 July after 19 years with the company.