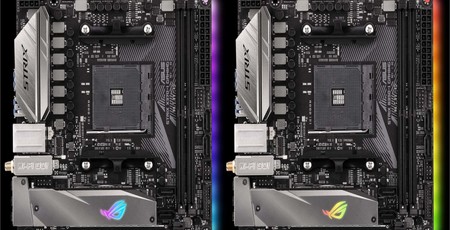 Asus has announced that it is pushing AMD's Ryzen platform to the compact-case crowd, launching a pair of new mini-ITX boards based on the X370 and B350 chipsets under its Republic of Gamers (ROG) Strix brand.

Both featuring the AM4 socket and supporting any of the present Ryzen processor models - but not the upcoming AM4 APU parts, both boards lacking the necessary video output capabilities - Asus claims that its Strix X370-I Gaming and B350-I Gaming motherboards don't cut corners. Each, the company boasts, feature the same six-phase voltage regulation module (VRM) design as their full-size equivalents, support high-clocked memory modules thanks to short signal traces, and include three fan headers of which one is configured out-of-the-box for a liquid-cooling system pump or all-in-one sealed-loop cooler.

Other features shared by both boards include a bundled M.2 Audio Combo Card, which serves as both a 'SupremeFX' sound card and M.2 storage slot and features a dedicated heatsink to prevent an M.2 drive from hitting its thermal throttle point. A secondary M.2 storage slot is found on the back of both boards, though it lacks the heatsink feature. Both boards - described by Asus as 'all but identical twins' - also include integrated 802.11ac Wi-Fi connectivity with 2x2 MU-MIMO antennas as well as an Intel gigabit Ethernet module, four SATA ports, dual USB 3.1 Gen 2 ports and four USB 3.1 Gen 1 ports with an internal header for a further two ports, and a single internal USB 2.0 header for older cases, fan controllers, and the like.

Sadly, while Asus has been quick to show off the features of the boards there's an important topic on which it remains coy: Pricing will be announced 'in the coming weeks', the company has claimed, with boards to hit retailers by the end of the month. More information is available on the official website. Asus brings an overclockable ROG Strix board to AMD's budget B350 chipset for just £120.