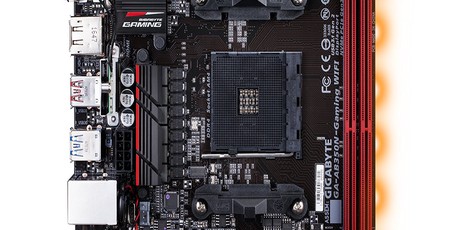 It's been quite a long wait since the launch of AMD's AM4 platform back in March for the arrival of the first mini-ITX motherboards.

We've seen the launch of three ranges of mainstream Ryzen CPUs as well as the high-end desktop Threadripper ones , but while you could build a micro-ATX Ryzen system a while ago, it's only been recently that the likes of Biostar, ASRock, and Gigabyte have taken up the mini-ITX mantle; MSI and Asus are still absent.

The obvious allure of mini-ITX on AM4 is the ability to have six- or eight-core CPUs in a tiny system - something that's thus far only been possible with the likes of ASRock's X99E-ITX/ac. As such, this is very much an untapped market.

Examples like the Gigabyte AB350N-Gaming WiFi we're looking at today, though, have another advantage over their Intel Z270 counterparts, which is price. Despite sporting RGB lighting and beefier power circuitry, the AB350N-Gaming WiFi costs around £15 less than one of the cheapest Z270 mini-ITX boards out there - Gigabyte's own Z270N-WiFi - and a huge amount less than the likes of the Gigabyte Z270N Gaming 5. However, this board sports an eight-pin EPS12V connector along with cooling for the six-phase CPU power circuitry, so overclocking is most definitely on the cards, while the rest of the specification is pretty decent too. You get Realtek ALC1220 audio, which is used on most mid-range and high-end boards at the moment, and RGB lighting comes in the form of a single four-pin header as well as a bunch of LEDs down the rear side of the PCB next to the DIMM slots. At just over £100, expecting the PCB to be bristling with features is unrealistic, but there are some other areas that might raise eyebrows. For instance, the layout is a little all over the place compared even to Gigabyte's Z270N-Gaming 5, with the eight-pin EPS12V connector planted between the VRM heatsink and I/O panel, while the SATA ports and 24-pin ATX power connector are located at the top of the PCB with just the DIMM slots on the right side of the board. However, how much of an issue this will be will depend on your case, as we've said before - in some it won't be an issue at all. There's no top-mounted M.2 port, which is the norm these days on mini-ITX boards; it's instead located as usual on the rear of the PCB. It supports both SATA and PCIe x4 NVMe devices, so whether you just want to ditch your hard disk or 2.5" SSD and use a similarly priced SATA M.2 model, or take advantage of a PCIe NVMe device, you have that choice. The slot is limited to 80mm/2280 devices, but that encompasses the popular models from Samsung amongst others anyway. In the box, you get a desktop Wi-Fi antenna, and that's pretty much it as far as noteworthy accessories go. The rear panel offers a pair of USB 3.1 Gen 2 Type-A ports, but no Type-C port, but with eight USB ports in total, it's a handy amount for any system. While the board goes all-out on the audio, there is one cutback with networking: the use of a Realtek rather than Intel network adaptor.