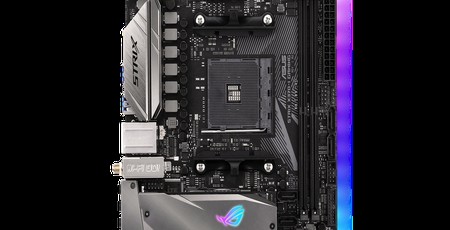 While Asus has already released its Intel Z370 ROG Strix mini-ITX board, it's taken since March to offer anything similar for AMD's AM4 socket on either of the popular overclocking-capable chipsets.

The wait is over, though, and while Gigabyte (as well as Biostar and ASRock for that matter) beat Asus to the finish line with its B350-based AB350N-Gaming WiFi, the ROG Strix X370-I Gaming is far more enthusiast orientated with better cooling albeit a similar six-phase power delivery.

The reason for the delay, according to Asus, is that it wasn't entirely sure how Ryzen and AM4 would fare as a platform, so releasing something that's already a niche product into a market that could potentially have offered poor sales even on ATX boards... well, you get the picture. Thankfully, though, sales appear to have been good enough - in fact, AMD even made profit recently, and the board we're looking at today is every bit as good as its Z370 counterpart. Ryzen is an interesting proposition for mini-ITX, as there's potentially more grunt than Coffee Lake in multi-threaded applications, but it comes in a guise that's far cheaper than Intel's HEDT platform that sports only one mini-ITX motherboard thanks to ASRock.

The downside, some have argued, is that AMD's lack of integrated graphics processors on the CPUs themselves means that great boards like this need to be used with a discrete graphics card as opposed to the cute little octa-core, 16-thread rig you had planned, although you can't do that on Intel's HEDT platform either. You also have the benefit of cheaper AMD CPUs - the octa-core Ryzen 7 1700 costs £100 less than the six-core Core i7-8700K for example. The ROG Strix X370-I Gaming has four SATA 6Gbps ports as well as two M.2 ports, with one of these on the rear of the PCB. The latter supports only SATA-based M.2 SSDs, so if pairing a cheaper SATA M.2 SSD for storage along with a PCIe M.2 SSD for your games and OS,  you'll need to place the PCIe one top side underneath the large heatsink. You can also see a USB 2.0 header on the PCB, which was missing from the Z270 mini-ITX board, but thankfully it has returned here (and on the Z370 equivalent) and is useful not least of all for controlling some AIO liquid coolers. There's a dedicated header for AIO pumps, too, although all of the three board headers are limited to 1A/12W, so you won't be powering your Laing DDC or D5 pumps directly off the board. There's a thermal probe header, too, but sadly you're not able to assign any of the fans to this input in the EFI's fan control suite like you can on most MSI and Gigabyte boards. The VRM heatsink is certainly hefty, and its height should mean it gets a waft of airflow from your case fans. It will need it if you're overclocking too, as it does get very warm, but after a couple of hours of benchmarking with over 1.4V pushed through the CPU, we noticed no ill effects. This heatsink sits 35mm above the PCB, but as it's within the usual confines of the I/O panel ports, we doubt this will be an issue. With the M.2 heatsink attached and an 800 RPM fan pointed at the motherboard from a foot away to mimic a case fan's airflow, the M.2 temperature peaked at 57°C during a back-to-back run of CrystalDiskMark lasting around 10 minutes. It was 10°C warmer without the heatsink, but the location on top of the raised audio card means that it's far more likely for your case's airflow to aid cooling the heatsink too - we've certainly seen much warmer temperatures on many other boards.

The heatsink also pairs up with a row of LEDs underneath the right side of the board with the RGB light show, with the small ROG symbol on the heatsink connecting to a small header on the discrete SupremeFX S1120 audio card that provides power and control to the LEDs. There's some nifty innovation here from Asus for sure, which is very Impact-esque. The heatsink rises 27mm above the PCB, but this should still allow most CPU coolers to clear it.

Sadly, despite the price tag, there are only two USB 3.1 Type-A ports, with no USB 3.1 header nor a reversible Type-C port. We doubt this would bother too many people tough. The PCB is understandably packed, but it would have been nice to get another pair of USB ports in there somewhere, as six is something of a bare minimum for most of us, and even the Gigabyte AB350N-Gaming WiFi, which costs £80 less, includes eight. That said, the board does include 802.11ac Wi-Fi, but then so does the Gigabyte board. MSI's top XPower board has made its way to AM4. How does it compare to Asus's Crosshair VI Hero?