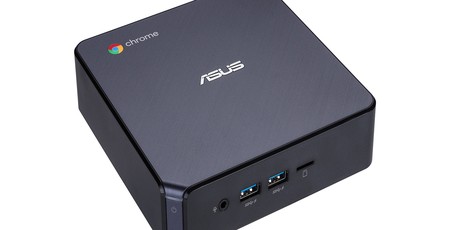 Asus has today announced the launch of its Chromebox 3 range of Google Chrome OS-based mini-PCs, offering a total of four models with varying specs.

The new NUC-style PCs feature a range of 8th Generation Intel processors, although 8th Gen here refers to Kaby Lake-based parts rather than Coffee Lake ones which also get lumped under the misleading 8th Generation banner. Specifically, the options include the Intel Celeron 3865U with two cores and two threads (2c2t), the 2c4t Core i3-7100U, the 4c8t Core i5-8250U, and the 4c8t Core i7-8550U. Memory configurations are CPU-dependent, but at peak the Chromebox 3 supports up 16GB of 2,400MHz DDR4 spread across two channels. For storage, M.2 drives ranging from 32GB to 256GB will be offered.

802.11ac Wi-Fi and Bluetooth 4.2 cover wireless networking, while a single Gigabit Ethernet port is included for wired purposes. The front I/O has dual USB 3.0 ports, a single 3.5mm jack with combined headphone and microphone capabilities, and a micro SD card reader. The rear I/O has a HDMI output, a USB 3.0 Type-C port with DisplayPort capabilities, and either three USB 3.0 ports or one USB 3.0 port and two USB 2.0 ports depending on the SKU. The unit measures 149mm squared and 40mm tall and weighs 1kg.