The digital distribution specialist formerly known as Good Old Games, GOG.com, is moving even further away from its founding concept with the announcement that it is to begin offering film and TV programme downloads.

Good Old Games originally launched as a subsidiary of Witcher-maker CD Projekt RED in response to how many digital distribution services were encumbered with digital rights management (DRM) technology that restricted how buyers could use the software they were downloading. As its name implies, the service originally focused on republishing out-of-print titles, adding updates, patches and compatibility wrappers like DOSBox to ensure they would work on modern systems while also offering extras like digital instruction manuals, wallpapers and soundtracks.

In 2012, the site became GOG.com and announced that it would also be publishing newer games from independent developers along with selected triple-A content from other publishing houses that agreed with the anti-DRM ethos of the site. Now, the company is branching out still further with video downloads - but retaining, thankfully, its refusal to adopt DRM technology.

'Our goal is to offer you cinema classics as well as some all-time favourite TV series with no DRM whatsoever, for you to download and keep on your hard drive or stream online whenever you feel like it. We talked to most of the big players in the movie industry and we often got a similar answer: "We love your ideas, but … we do not want to be the first ones. We will gladly follow, but until somebody else does it first, we do not want to take the risk,' the company wrote in its announcement. 'DRM-Free distribution is not a concept their lawyers would accept without hesitation. We kind of felt that would be the case and that it's gonna take patience and time to do it, to do it, to do it right. That's quite a journey ahead of us, but every gamer knows very well that great adventures start with one small step.'

That small step, the site has explained, is to offer a range of gaming and culture documentaries at a flat $5.99 to download and keep - although the company warns that some titles will be more expensive than that once the introductory period has ended. Two documentaries, The Pirate Bay: AFK and The Art of Playing, are being offered free so users can test the service without having to spend any cash. As with the company's games, many titles come with bundled bonus content, and the site has promised to release new films each week for both download and streaming.

The GOG Movie Catalog is live on the site now. 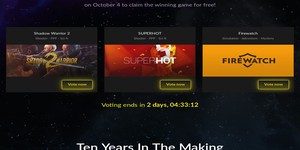