Aimed firmly at videographers and other creative types who churn through data and need high-speed storage to do so, the Drobo Mini packs four 2.5" drives into a surprisingly compact chassis. The drives are configured as standard using Drobo's proprietary BeyondRaid system, allowing for mixed drive capacities, single- or dual-redundancy, thin-provisioning and space reclamation, and virtual hot spare support.

While the Drobo Mini can be used with any 2.5" SATA drive, the company has designed it as an all-flash device. Those who want maximum storage at minimum cost, however, can claw back a little performance by adding an optional mSATA drive to base of the box, which is then used as file cache to speed up accessing the most commonly used data on the array. To prevent bottlenecks, the chassis includes a pair of high-speed Thunderbolt ports for connection to a desktop or laptop with daisy-chain support, alongside a single USB 3.0 also included for non-Thunderbolt systems. Network connectivity is not supported; the Drobo Mini is purely a storage expansion box, not a network-attached storage (NAS) system.

While the Drobo Mini is positioned as a more portable and affordable alternative to the company's Drobo 5D desktop chassis, the system doesn't come cheap: the disk-free chassis is available now priced at around £299.99, while Drobo itself offers versions with up to 4TB of flash storage installed through its US webshop. 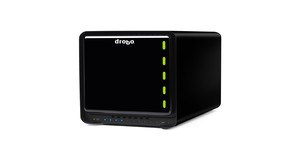