HGST, the once-and-former-initialism now owned by Western Digital, has announced a product which has a novel way of increasing storage capacity: a helium-filled hard drive.

Developed for the enterprise market, the helium-filled drives pack seven platters into a standard 3.5in form factor. With most large-capacity drives only managing five, that's a 40 per cent boost in storage space - potentially turning a high-end 4TB drive into a 5.6TB behemoth.

Hitachi's drive uses helium to lower the drag acting on the disks. With a density one-seventh that of air - which, incidentally, is the reason helium balloons float - the drag on the spinning platters is greatly reduced, meaning the motor draws less power and generates less heat. The fluid flow forces which buffet the disks and head-positioning arm are also reduced, allowing the platters to be placed closer together - hence the jump from five platters to seven.

Finally, the helium works to conduct heat away from the various components more efficiently than air, making the drive run cooler by some four degrees Celsius, according to HGST's prototype testing.

Not everyone is likely to be pleased by HGST's use of helium, however. The gas is becoming a scare commodity, and its frequent use in medical applications means spare helium for balloons, storage products and making people sound like they're auditioning for a place in the Lollipop Guild of Munchinktown is hard to come by and a potentially frivolous waste of a dwindling resource.

Despite this, HGST has declared that it will be launching the helium-filled drives to market in 2013, initially concentrating on the enterprise and data-centre market. Formal specifications and pricing are expected to be released closer to that time. 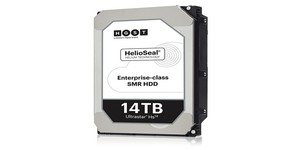 A month late to the party.