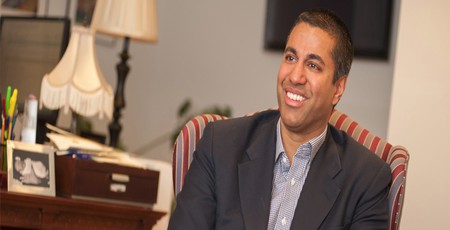 The US Federal Communications Commission (FCC) has voted 3-2 in favour of the repeal of 2015 regulation which enforced so-called 'net neutrality rules', allowing companies within the US to begin charging extra to prioritise - or simply not-artificially-restrict - access to selected sites and services.

That the FCC was looking to repeal the regulations on net neutrality introduced during Barack Obama's presidency was revealed with the tabling of the 'Restoring Internet Freedom Order' in November by Donald Trump-appointed chair Ajit Pai. 'In 2015, the prior FCC bowed to pressure from President Obama. On a party-line vote, it imposed heavy-handed, utility-style regulations upon the Internet,' claimed Pai at the time. 'That decision was a mistake. It’s depressed investment in building and expanding broadband networks and deterred innovation.'

Supporters of the regulation - which does not include Verizon, a US communications giant at which Pai worked as Associate General Counsel between 2001 and 2003 and with whom he recently released a 'joke' video in which a Verizon executive proposed placing 'a Verizon-groomed puppet' in the position of FCC chair, which Pai claimed 'sounds awesome' - argued that a repeal of the regulation would support only large established businesses, crowding out startups, small businesses, and individuals while increasing costs for users.

Now, despite evidence that over two million comments made in favour of repealing the regulation were fake, created using stolen identities by an as-yet unidentified fraudster, while an estimated 50,000 genuine comments against the repeal were rejected, the FCC has voted in favour of the Restoring Internet Freedom Order and has thus repealed the net neutrality regulation.

The fight, however, is far from over. Fast Company reports on a range of companies and organisations, from the Media Alliance through to media streaming service Netflix and backbone providers Cogent and Level 3, who have battled against the repeal and are expected to file complaints, appeals, and lawsuits in an attempt to have the ruling reversed.

Critics campaign to stop that happening.