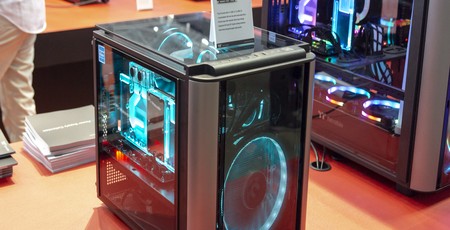 Thermaltake was celebrating its 20th anniversary at Computex this year, perhaps prematurely since that isn’t actually until next year, and did so by showcasing new chassis and voice-activated RGB hardware.

That’s not all Thermaltake had on show; it actually had one of the biggest portfolios of new products at the entire show, with a silly number of press releases landing in our inbox over the week. Our focus here are the cases and RGB ecosystem, but water-cooling fittings, peripherals, and PSUs were also there. 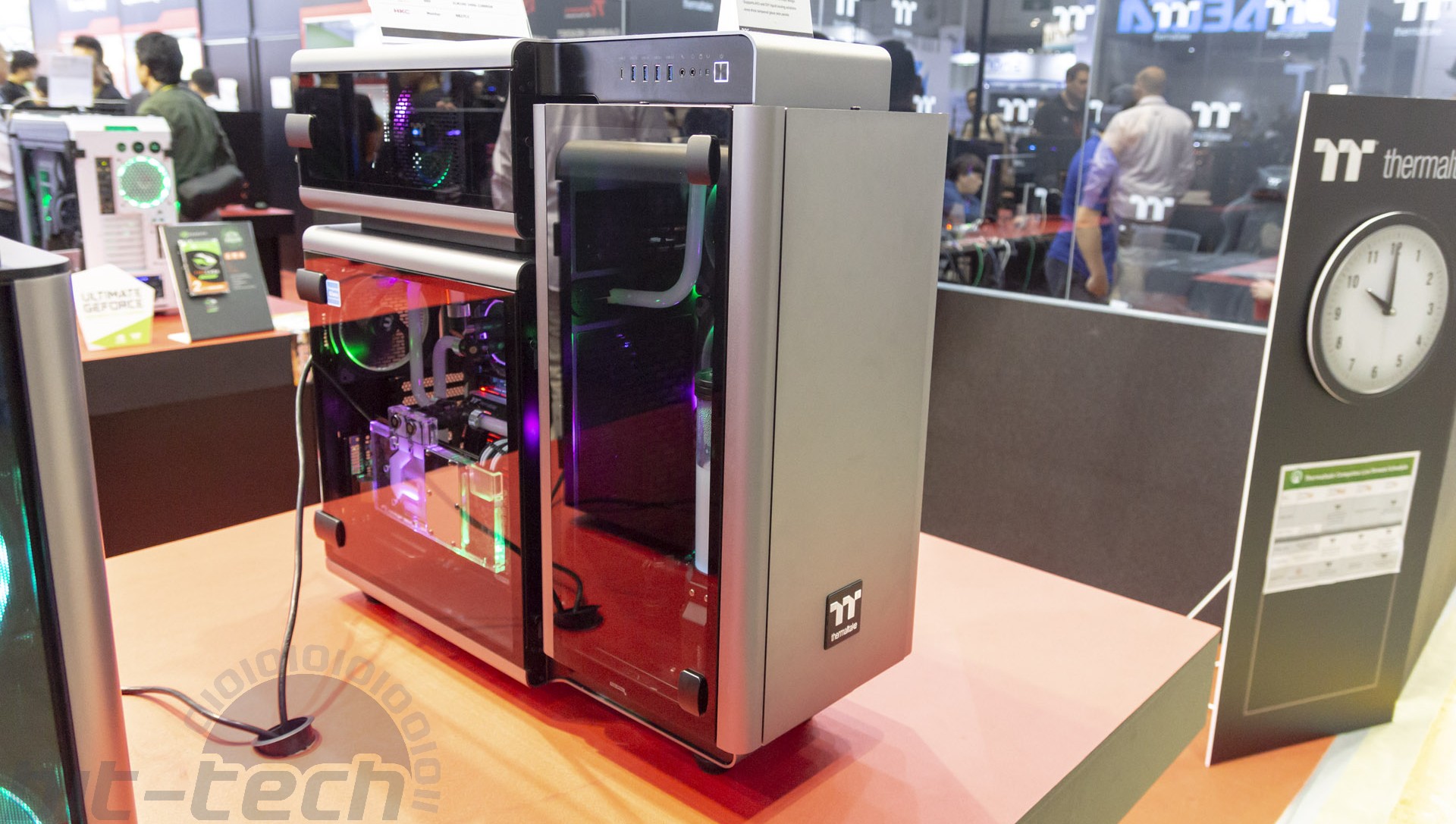 The Level 20 chassis, inspired by the Level 10, was first shown off at CES, but Computex marks its official launch. This triple-chamber monster is described as a super tower, and has room for your main hardware in one area, loads of storage and water-cooling in the front bit, and your PSU up top. Tempered glass (4mm thick) is of course used for each of these. You can also cram up to 11 drives inside, and the front I/O includes USB 3.1 Type-C. It is supplied with three 140mm Riing Plus RGB fans, two Lumi Plus LED strips, and one Riing Plus RGB controller. This will be a $999 case once it’s available – ouch. 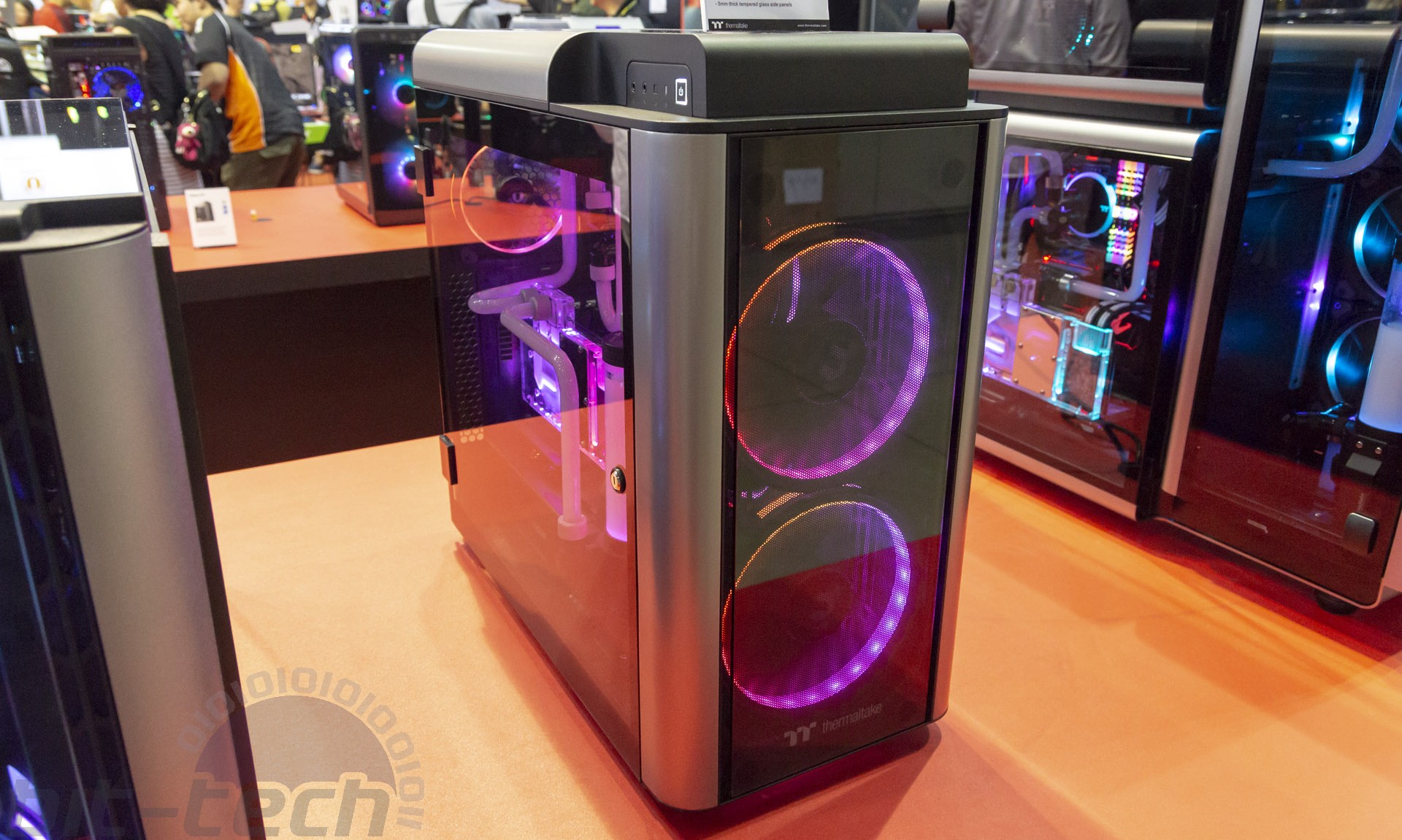 Making their debut at Computex were three new Level 20 cases, turning the single chassis into a small family. Starting at the top we have the Level 20 GT RGB, sporting 5mm tempered glass panels on the front, sides, and roof. USB 3.1 Type-C is included again, and radiators up to 420mm in size can be accommodated. Two or even three GPUs can be vertically mounted, and it comes with dual 200mm and one 140mm fan pre-installed – all RGB of course. 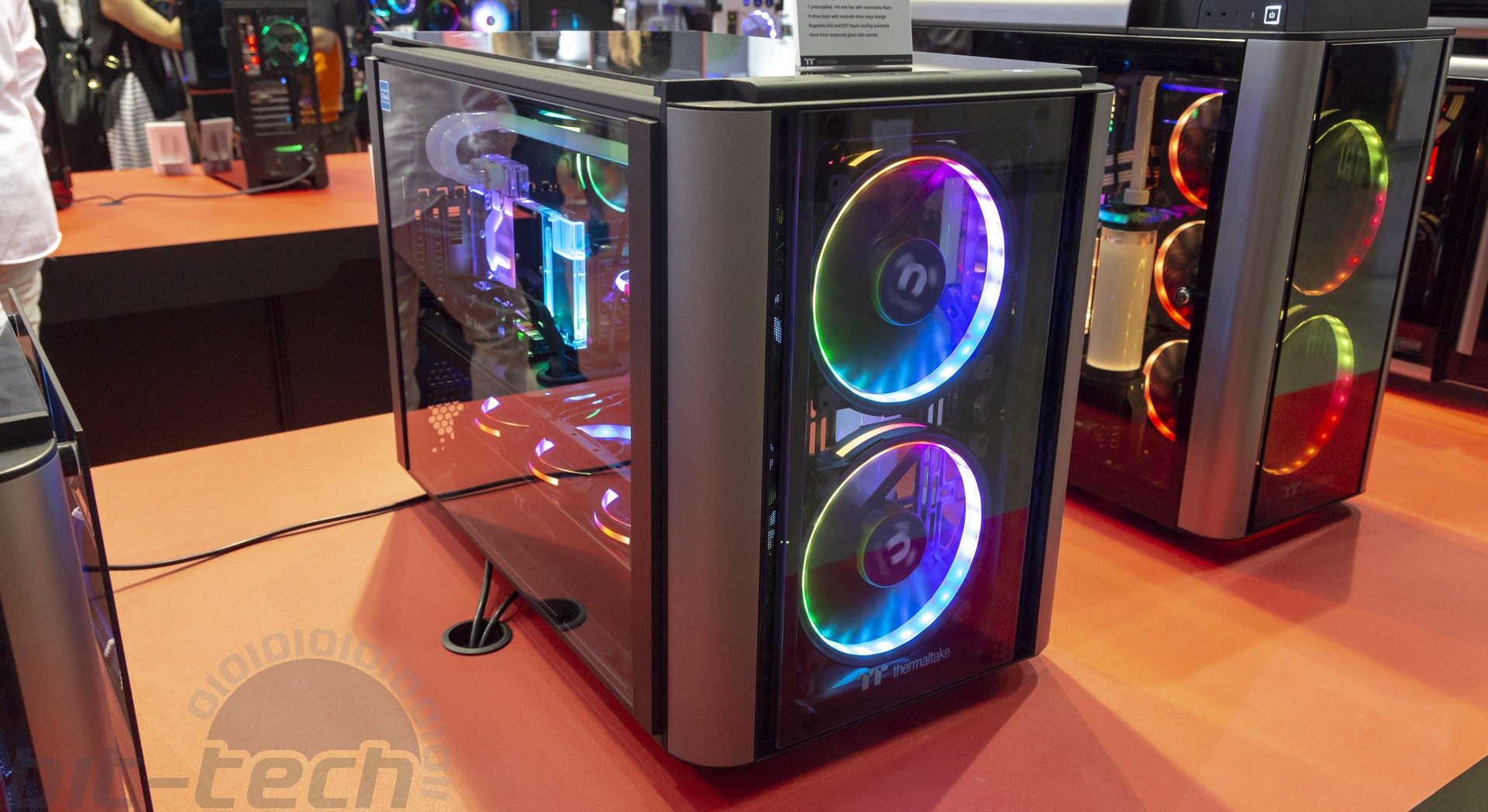 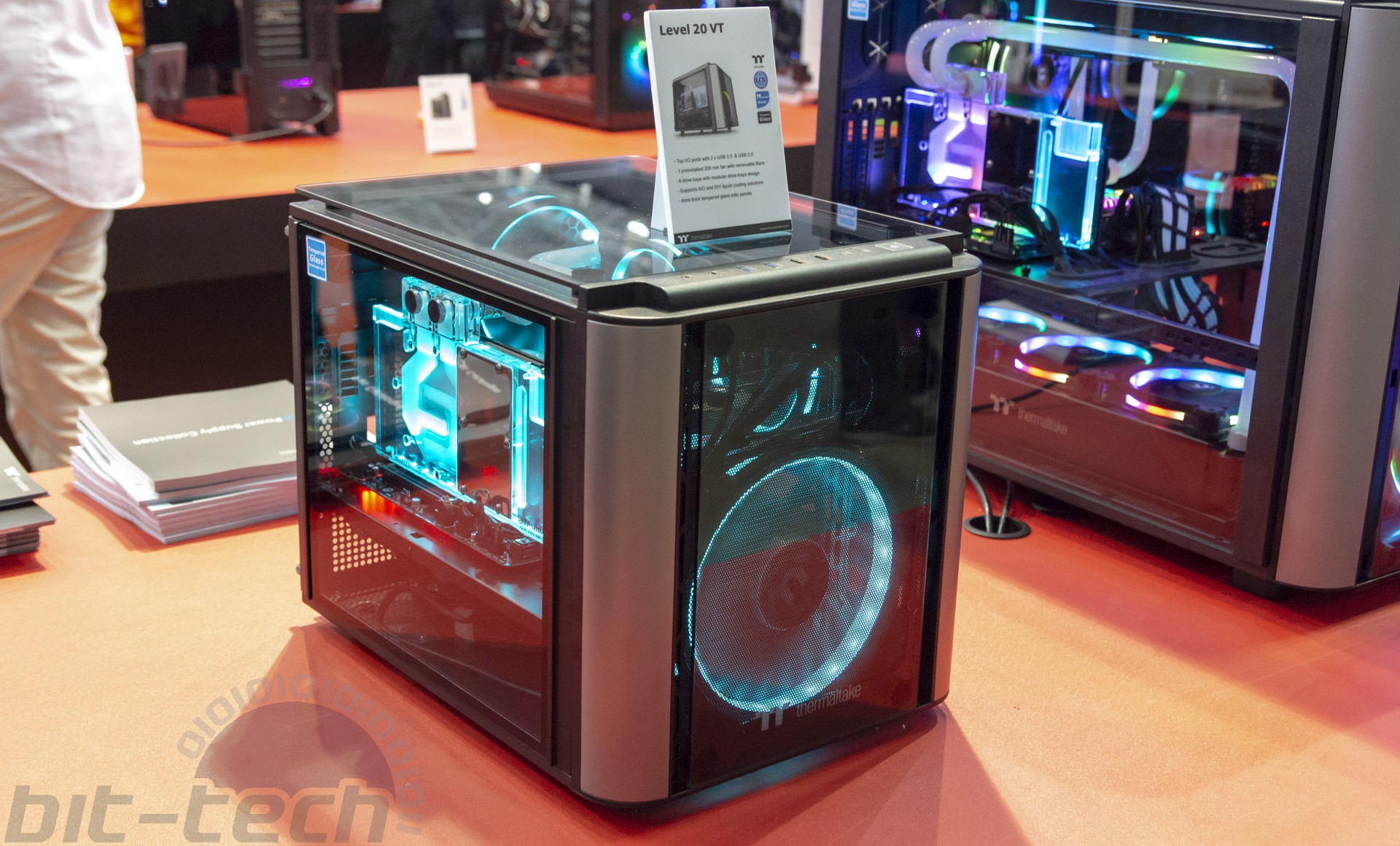 The Level 20 XT and VT continue the theme of curved edges and tempered glass panels but switch to horizontally mounted motherboards – E-ATX for the XT and micro-ATX for the VT. There’s room for hardware in the bottom chamber such as a radiator in the larger XT or your PSU in the VT. 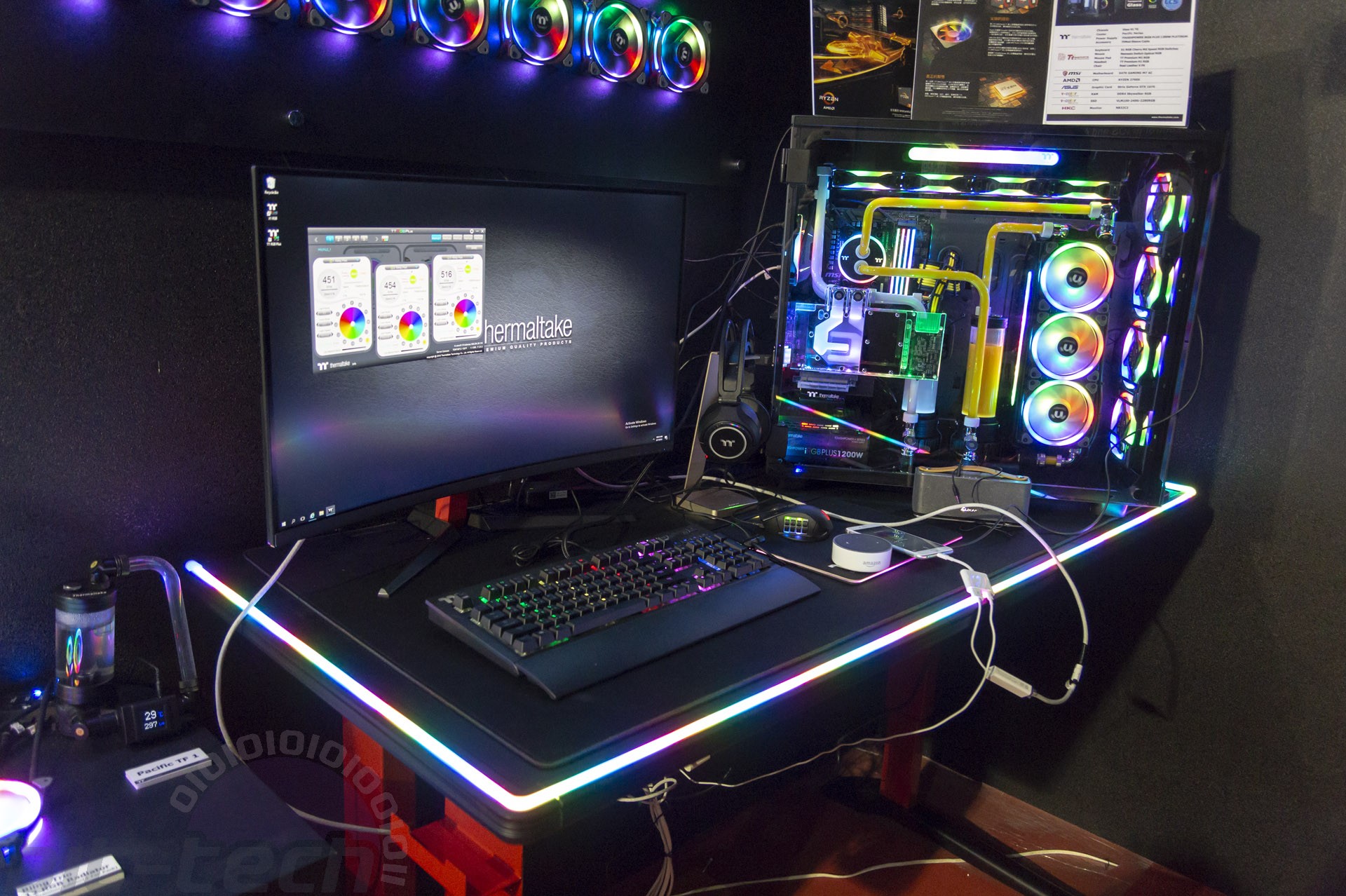 While RGB lighting was unfortunately the most prominent theme of Computex 2018, few companies took it as far as Thermaltake, which used the show to launch the TT RGB Plus Ecosystem with ‘TT AI Voice Control’. That’s right, folks, the robots are here, and they look fabulous. Joking aside, the idea here is to maximise the amount of hardware that can be synchronised together. Using TT RGB Plus Software versions 1.1.5 or later, you should be able to sync a whole load of Thermaltake RGB products (e.g. fans, cases, coolers, PSUs, keyboards, water-cooling hardware, etc.). There are also plans to work in support with Alexa and Razer’s Chroma ecosystem. If you’re interested, check out the official website.

One new product you might have clocked in the image above it the RGB-illuminated desk. This is merely a prototype for now, but it includes up/down adjustment and is expected to launch by the end of the year. 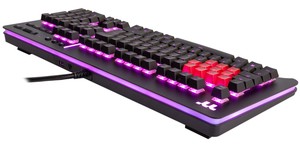 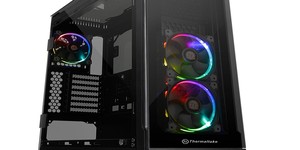