Mostly, I think I'm just fatigued of writing about survival games, and Conan Exiles isn't doing anything exciting. Funcom is an experienced developer and should honestly know better than to push out a game that feels this derivative. It's cynical nearly, a very deliberate attempt to poach the better parts of Ark: Survival Evolved and Rust but with the ability to choose the size of your own dick / breasts with a handy slider and then getting out into the game to wave them at people.

Their inclusion is pointless, almost as if they're there just for people who stream or make gifs. If it's not your scene, though, you can opt for less nudity, with your character instead covering themselves with cloth wraps. Get away from the junk-physics, and the cool feeling that you're actually in Hyboria — and it feels close enough, if your version of Hyboria is full of nothing but sand and the occasional palm tree — and it's exactly the same as every Early Access survival game you've ever played but without any of the interesting parts and selling for £27.

Conan Exiles is a perfectly well put together game — although the game's early days were filled with people complaining about server problems, rubberbanding, and other weird glitches, none of these seem to be present now — it's just not one you're ever going to want to tell your friends about. It's not a game that you'll ever care about. It just kind of exists. That's perhaps the real reason i haven't spent as much time with this as I would with a "full" preview, because maybe there is a great game hidden away under the layers of cynical nonsense, but I just don't care enough to find it.

This doesn't mean I didn't have fun, and the other players on the particular server I'd joined, who seemed invisible in the huge and confusing map but were responding dutifully and with great patience to my increasingly confused questions, seemed really lovely. You can craft, hunt, kill other players, and form your own dwelling out of the very earth; it's very much a survival video game, but for me it's impossible to recommend, and it's not really trying to do anything particularly exciting. We'll probably revisit Conan when it loses the Early Access tag and give it a proper roll of the dice to see what makes it tick. Here, though, after six hours of play? It's very hard to find anything interesting to say about a game that's clearly been made solely to soak up the pennies using a license. In that case, it's already been successful, selling a whole bunch of copies in short order.

I'm just not sure if it's a game you would ever want to play, when the games it's aping are cheaper, further along in development, and seem to have a whole lot more to actually say. 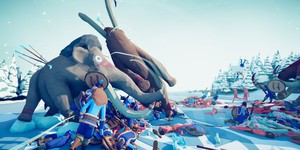