It's only February, but I'm fairly certain that Horizon: Zero Dawn is the most beautiful game I'll play this year.

It's beyond stunning, the best looking game I've seen on the PS4 thus far, despite the fact I'm playing this on the base PS4 and not the PS4 Pro, which has some extra graphical gubbins that I didn't get to try out for the purpose of my review. I'm not even being hyperbolic here, it just looks that good. Every biome you visit, every character you encounter is a finely detailed thing of beauty, both visually appealing and a great example of the world Aloy inhabits, with an anachronistic style that fits perfectly with the world around them. I think explaining the premise of Horizon robs it of some of its magic, so I'll try to do this with a light touch. Horizon puts you in the shoes of Aloy, a young girl that's grown up on the edge of a primitive tribe, obeying ancient customs in a post-post-apocalyptic world that they don't fully understand.

The biggest threat in this brave new world is the existence of robotic machines living amongst the local flora and fauna. Much of the game's tension comes from hunting the creatures down to harvest their innards, valuable parts you need to upgrade your weapons and armour, with metal fragments from their corpses making up this world's universal currency. Horizon owes a heavy debt to the survival genre, and you'll spend a lot of your time busy with artificial chores, work created by the game to convince you there's a lot of content. You're not collecting feathers from rooftops, but preparation for a big hunt takes work: The ammo needs crafting, and traps and potion stores need refilling. You can buy these from merchants, but again they only take metal fragments, so one way or another you're going to have to punt some robots. This busywork is its own reward, and for most of the 30 hours I spent with the game I didn't begrudge it too much, and while I was stuck on the treadmill that saw me using ammunition to hunt animals down for components so I could craft ammunition, I was still having fun.

When these constraints fall away, when deep in the game's storyline spelunking in one of the game's cavernous Cauldrons — Cauldrons here are futuristic dungeons just below the surface of the world, where you can find great rewards but also giant, awful creatures — or perhaps clearing out a corrupted zone, the game just sings. The fights against these aforementioned creatures is pure spectacle, a showcase of the finest moments the game has to offer. Each of your robot playmates has its own way of acting, and that encompasses their attacks and behavioural quirks. You'll need to learn to exploit these and learn where to hit the enemies and with what to be successful in taking them out. 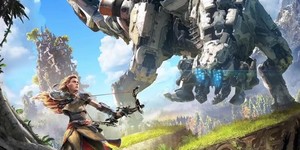